The AR-gun 15 is arguably the most controversial produced in the world today due to its use in mass shootings across the globe. However, the AR-15 style rifle is the most versatile and effective rifle for personal protection and home defense. Every American soldier has carried either an M-16 or M4 since Vietnam because it has capabilities to shoot from distances up to 500 yards (point target) and still can be used in Close-Quarters-Combat (CQB) operations. I wanted to rate each of these guns based on the quality of parts, effectiveness, versatility, and customization capability. My top 5 (in no particular order) are Daniel Defense M4 V11, Daniel Defense M4 V5, MMR, FN-15, and the S&W M&P 15.

Daniel Defense is one of the most premier rifle manufacturers in the world because it incorporates the best technology and the most expensive parts for a rifle. The features that stand out for the DD V11 are the KeyMod System, which is built into the SLiM Rail System.  The KeyMod system allows you to lock-in accessories, such as slings, lasers, lights, tactical forend grips, and anything else you could ever ask for without added tools. The SLiM Rail reduces the weight of the rifle and improves the ergonomics by allowing the operator to have their hand close to the muzzle for a more precise transition between targets. The V11 is built with an ambidextrous Grip-N-Rip Charging handle is built to redirect gas flow upwards and away from the face of the shooter. For a full review on the DD V11, read our Daniel Defense M4 V11 review.

Where Can I Buy The Daniel Defense M4 V11?

The DD5 M4 V5 is chambered in the 6.5 Creedmoor for competition shooting and the .260 Remington for either competition shooting or home-defense. This rifle features a 20″ barrel to improve the accuracy at longer ranges and control for followup shots. This rifle has been proven to be accurate up to 1,000 yards for an area target and is built with an adjustable gas block. This adjustable gas block allows for shooters to shoot suppressed or unsuppressed and helps reduce the gas blowback from the rifle operation for a lighter felt-recoil. The barrel is lined with Chrome and coated with heavy phosphate. The V5 is built with dual extractors for added reliability during the cycling of bullets and the bolt is built with a buffer for better cycling and lighter recoil.

The FN Herstal FN-15 Sporting rifle features some of the best stock features that I’ve ever seen in a gun right out of the box. It’s built with the famed Timney Competition Trigger, the Magpul CTR Buttstock, the Samson Evolution 15″ handguard, the Surefire ProComp 556 Muzzle Brake, and the Magpul MOE grip. These features would cost around $500 to order online and that doesn’t count the shipping and time it takes to put them on your rifle. The FN 15 is built for competition shooting with its free-floating 18″ match-grade cold hammer-forged barrel. This is a perfect rifle for the prestigious 3-Gun Competition if chambered in 6.5 Creedmoor and a 30-round magazine.

What is a Timney Competition Trigger?

A Timney Competitive Trigger is arguably the best aftermarket trigger you can install on your AR-15 rifle. It offers no creep with an adjustable trigger pull weight from 2-4 lbs depending on the purpose of use. There is no doubt in my mind that you’ll be more accurate with a Timney trigger than you will with any factory trigger. This is due to the EDM machine that builds all Timney triggers from S7 steel, which was chosen because it’s incredibly hard and durable and will not chip or break during heavy use. One of the great features of Timney triggers is its ability to be installed without extra tools. 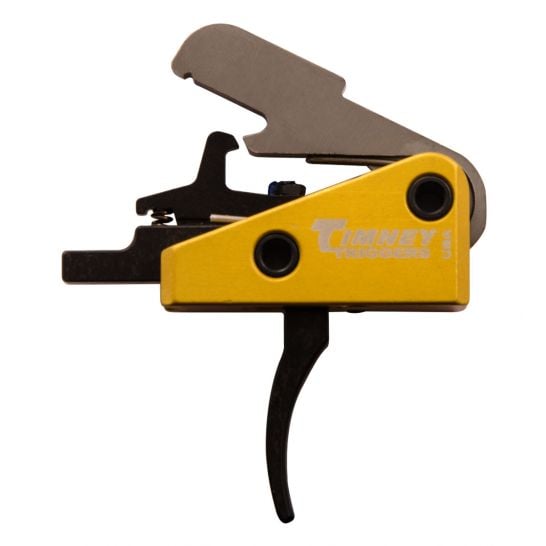 The Mossberg Modern Rifle (MMR) made its way onto this list because of its affordability, customization, durability, and effectiveness. I would never recommend buying a rifle with a fixed barrel because the recoil and accuracy of the rifle will be hindered. Mossberg understands this too, which is why they created a free-floating barrel with a direct-impingement gas system for optimal control and reduced felt-recoil. The MMR is built with a Magpul M-LOK forend and Magpul MOE grip that resembles the same feel for the more expensive Daniel Defense and FN rifles. The MMR has one of the shortest barrels on this list (16.2″) and has a full-length Picatinny Rail system to provide as much customization with sights, lasers, lights, and after-market optics. I recommend buying this rifle for beginner competition shooters who want to get into the game without spending thousands of dollars on a rifle. This is also a perfect rifle for home defense because Mossberg has been making reliable self-defense guns for a Century.

Where Can I Buy The Mossberg MMR Tactical?

The Smith & Wesson® M&P15 Sport is one of the easiest shooting and most affordable AR-15 model rifles on the market. It’s built with a full Picatinny Rail system and a 3-lug gas block for optics or aftermarket iron sights. S&W built this rifle around the corrosion-resistant 16″ barrel with Armornite finish to last, with a lifetime guarantee. The inner parts of the rifle, such as the gas key, bolt carrier, and firing pin are all chromed out for easy clean-up and added reliability versus aluminum. They even built this rifle with a forward assist button to ensure you can fix a malfunction if one arises in rapid time. This is the cheapest rifle on this list and one of my favorites to shoot around the range because it has no recoil and is accurate at any range closer than 600 yards.