Choosing The Best Bolt Carrier Group For Your AR-15

The bolt carrier group is one of the single most important components to have in your AR-15 rifle. It is after all what ‘runs’ the rifle. Without it, your AR-15 becomes a metal club.

Regardless of whether you are building a new AR-15 from the ground up or looking to level up your current AR platform, the BCG is arguably the component that deserves more consideration than anything else. 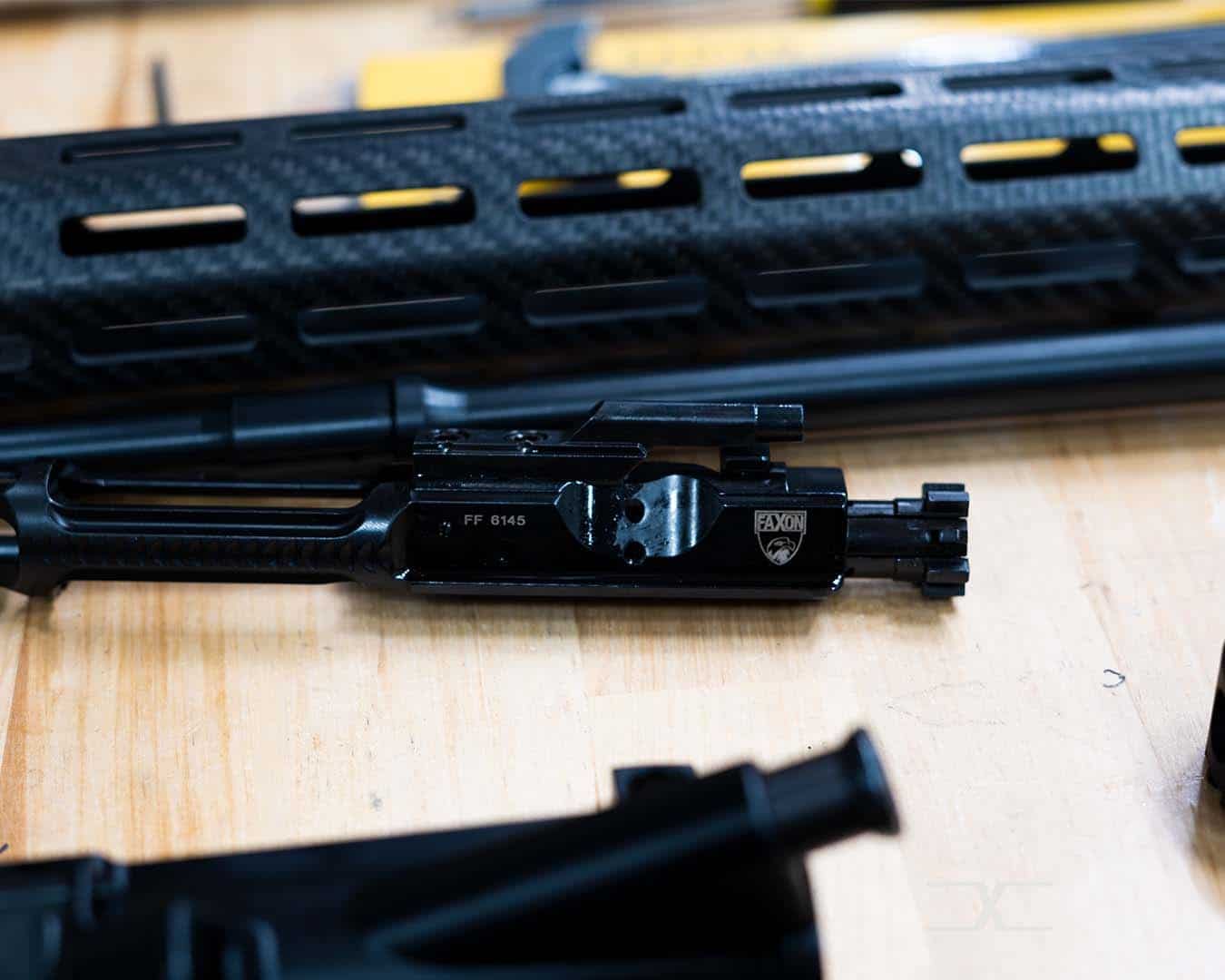 We’re going to cover the background information you need to know and then explain why Faxon Firearms is our choice for the best bolt carrier group.

What are bolt carrier groups?

The AR-15 bolt carrier group (BCG) is one of the most important parts of an AR-15 platform. The BCG is responsible for cycling the semiautomatic operation when the trigger is pulled, with a series of steps in this order:

These four actions are automatically performed when the trigger is pulled. The steps of chambering a new round and resetting the hammer allow the semiauto cycle to repeat, eliminating the need for a manual bolt action.

What Makes Up a Bolt Carrier Group?

This is the external housing for the bolt and is attached to the gas key. The carrier contains the bolt itself and all its components. The carrier also makes contact with the buffer and buffer spring assembly during the firing cycle and also takes the brunt of the force created by the expanding gases inside the AR-15 platform. Because of this, 9310 Tool Steel is commonly used during the manufacturing process.

The AR15 bolt helps guide the round into the chamber, extracts the spent case, then ejects the spent cartridge once you’ve fired the gun. The bolt features a “star" at the front, shaped like a cog, which allows the BCG to rotate 15 degrees to lock and unlock inside the AR-15’s chamber. The bolt has its own set of components; bolt body, gas rings, lugs, extractor, ejector, and the bolt face.

The bolt gas rings are located towards the rear of the bolt within the bolt carrier group. Their purpose is simple; they capture the gases and help regulate the pressure to help the bolt lock and unlock during cycling.

This is pretty self-explanatory. A firing pin is a component that strikes the primer of a cartridge, causing the whole process to begin. The retaining pin keeps it…well….retained. 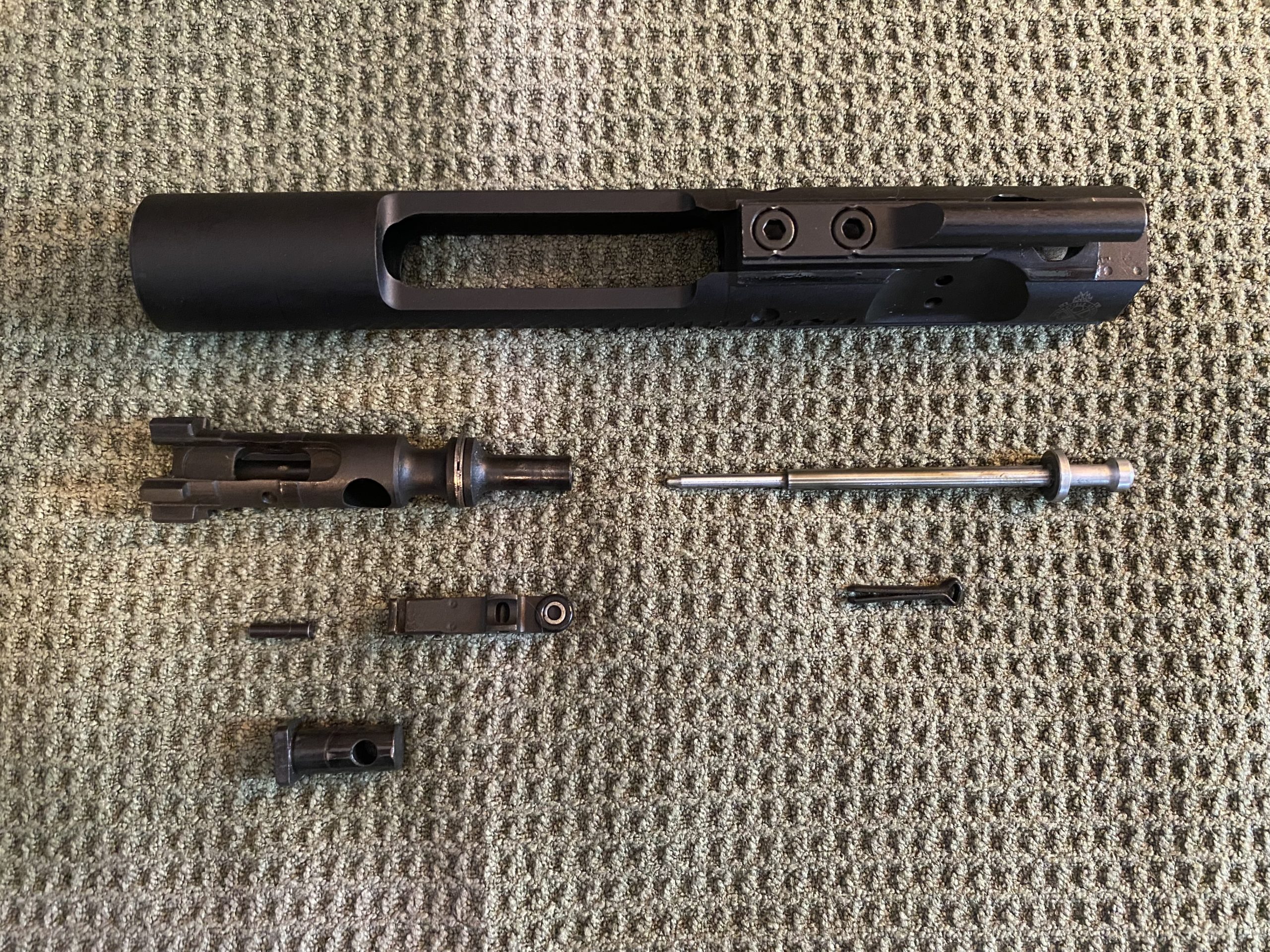 If you’ve disassembled your bolt carrier group and noticed excessively worn components, now is the time to replace those. CMMG has a killer bolt rehab parts kit for just this reason. 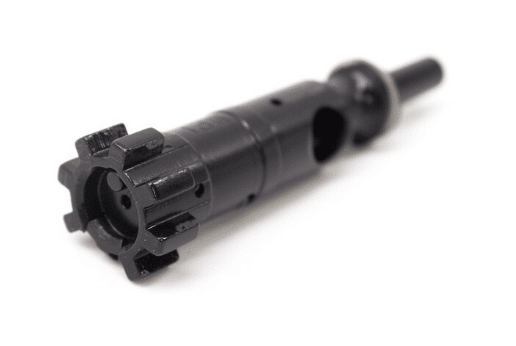 What is the difference between AR-15 and M16 bolt carrier group?

Installing an M16 BCG in your AR-15 won’t convert it to full auto. That would require swapping out the trigger, disconnector, hammer, and safety selector lever. Full-auto BCGs and commercial BCGs perform exactly the same and they use the same parts.

The only real noticeable difference and some won’t even notice, are the physical dimensions of the carrier itself.

The slightly larger rear section of the M16 BCG allows it to work with an auto sear. The auto sear in an M16 works by allowing the full-auto bolt to lock and unlock continuously while the trigger remains depressed. The auto sear needs that extra steel on the bottom of the M16 bolt to properly function. Without it, the auto sear can’t be “tripped", thus allowing the hammer to cock and de-cock (firing rounds automatically) without pulling the trigger every time.

In order for all this to happen, you need to have a lower receiver that is specifically designed for full auto functionality. Commercial lower receivers are not fabricated in a way to allow for the full-auto parts to be installed.

It is NOT illegal to use an M16 BCG in your AR-15. The M16 bolt carrier groups themselves are not regulated by any federal laws or ATF regulations. However, if you were to get your hands on a full-auto sear and full auto lower receiver parts kit, you’re going to have some explaining to do when the ATF comes knocking.

Is Nitride Good for BCG?

Nitride, also known as Melonite or Salt Bath Nitride (SBN), is a heat-treating process that creates a hardened surface by diffusing nitrogen into the metal surface. The resulting metal surface is extremely smooth and hard which makes it highly resistant to wear and corrosion whether this is your home defense AR-15 or your professional duty rifle.

The primary benefit of the nitride heat-treating process is that it does not require chrome lining of the gas key or internal areas of the bolt carrier itself, keeping manufacturing costs down. Additionally, the smooth finish requires less lubricating oil and is easier to clean.

What is Magnetic Particle Inspection Method?

Bolt carrier groups are subjected to immense amounts of pressure, heat, and friction. The pressure is somewhere on the magnitude of tens of thousands of pounds per square inch.

If any part of the bolt carrier group components contain microscopic cracks created during the manufacturing process, then using that BCG could result in a catastrophic failure to the firearm and possibly the shooter. To ensure this doesn’t happen, all Faxon bolt carrier groups undergo a magnetic particle inspection.

During an MPI test, the BCG is placed inside a magnetic field, usually created with two electromagnets. A liquid solution containing magnetic particles is then applied to the steel. The magnetic particles will adhere themselves to any cracks or tiny imperfections that are on or just below the surface.

Who makes the best BCG?

A lightweight BCG is designed for a rifle with an adjustable gas block and a builder who’s willing to spend the time tuning the gun. The heavier standard bolt carrier groups, such as the M16 BCG, are better suited to running any kind of ammo through any kind of gas system.

When it comes to either a lightweight BCG for more precision-tuned guns or a BCG that will run just about anything, Faxon has you covered. Personally, I like to have a gun that will run regardless of what ammo I throw at it and the outside conditions I’m running it in. That’s why I run the Faxon M16 BCG in my AR-15. When looking at lightweight bolt carrier groups, Faxon was unsatisfied with what the market had to offer. Seeing a capability gap, They set out to create a bolt carrier group that could live up to the Gunner name with no compromise in strength or function. Faxon set specifications that would allow no compromise.

By coating all parts, the carrier’s natural slickness is increased markedly requiring less gas and pressure to operate. Further, the Nitride process seals components against corrosion while making them fantastically wear-resistant. Gas keys use grade 8 fasteners and are fully staked for a lifetime of service.

Seeing “MIL-SPEC" as just the starting point, Faxon set out to ensure the best options are available for its demanding customers.

These options include using 9310 tool steel for the bolt, nitriding the assembly to increase surface hardness, decrease resistance, and have superior corrosion resistance compared to typical chrome and phosphate bolt carrier groups. All M16 bolt carrier groups are fully MPI tested to ensure the material is sound and without defects. Bolt lugs are chamfered 45 degrees to ensure reliable action for even the highest pressure hand loads and fast lightweight actions.

What Are Users Saying About the Faxon Bolt Carrier Groups?

May 6th 2022 – "Excellent value and quality for the money spent. I have close to 300 flawless rounds on this BCG at the time of this review."
May 3rd 2022 – "Bought with the barrel in a combo set. Headspace was spot on and seems like a quality product. Pleased."
March 8th 2022 – "Beautiful fit and finish. Zero failures out of 200 plus rounds!! Awsome craftsmanship! Thanks folks!"

Take 10% Off Your Next FaxonFirearms.com Order With Coupon Code:
REFACTORREADER10