If you’re looking for a quick and easy way to customize the look and performance of your AR-15, start by upgrading the muzzle device.

A muzzle device is exactly what it says; a device that attaches to the muzzle of your rifle barrel. Almost all AR-15 rifles have a threaded barrel, so this is something anybody can do without having to pay a gunsmith or your local gun shop to install. 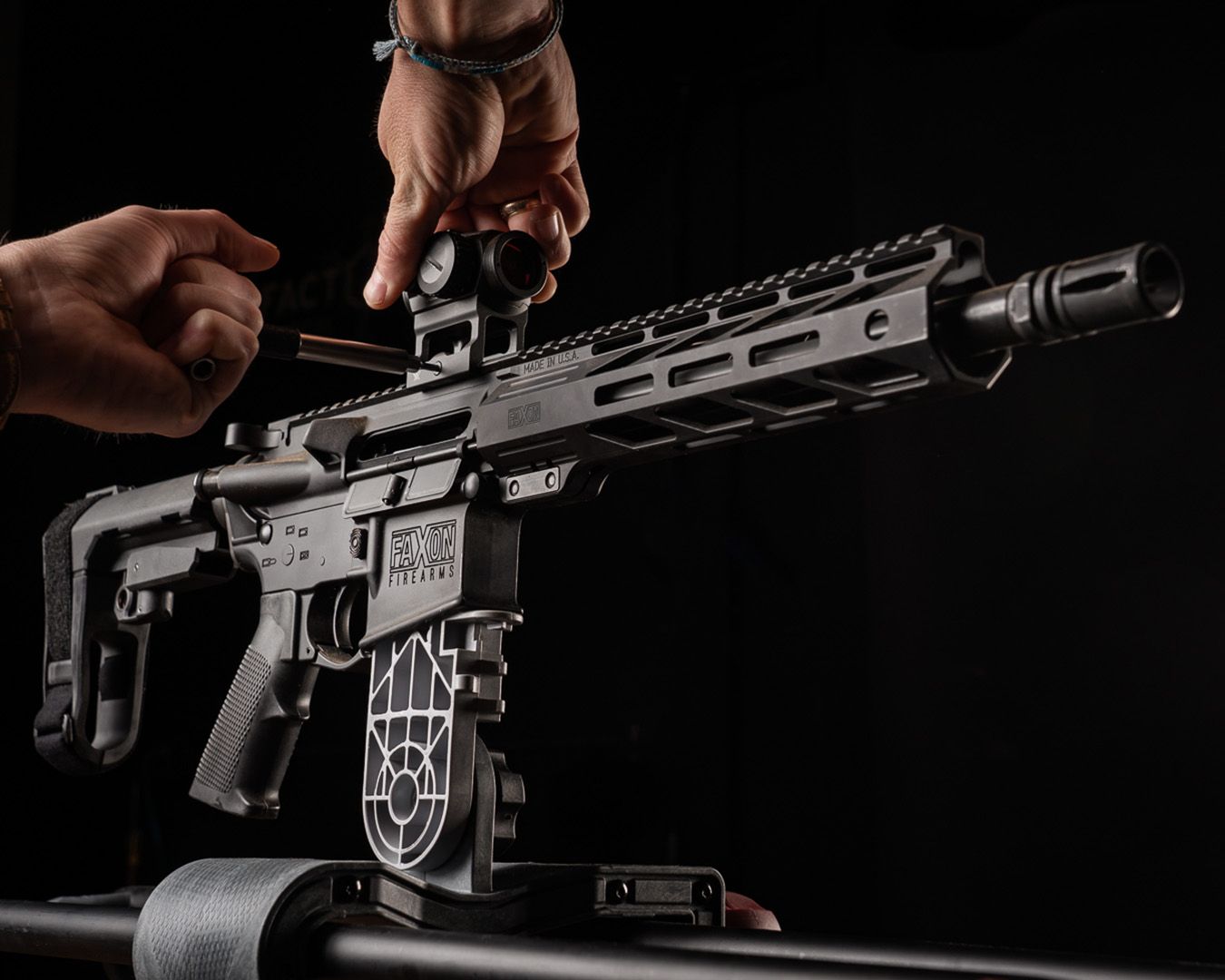 What Do Different Muzzle Devices Do?

When you pull the trigger of an AR-15, the gun powder inside the cartridge is ignited by the primer. The high pressure that is created from the explosion propels the bullet down the barrel.

Most of the gasses are burned up in the process depending on the length of the barrel, but there are some that escape the muzzle as the bullet leaves the barrel. The ‘un-burnt’ gasses that leave the barrel have a tendency to combust when it comes into contact with the oxygen-rich air outside of the gun. This chemical reaction causes a brief but bright fireball known as muzzle flash. Flash hiders are designed to disrupt that reaction to the oxygen-rich air, thus reducing or eliminating the muzzle flash.

What are the Different Type of Muzzle Devices?

Each of the different muzzle devices serves a specific purpose. Depending on what your needs are, the right muzzle device will enhance the performance of any AR-15.

The flash hider is designed to disrupt the escaping gasses with the goal of greatly reducing or eliminating the muzzle flash. Generally the shorter the barrel, the brighter and more violent of a flash you’ll experience.

Hiding or eliminating the muzzle flash is extremely important when shooting at night or during low light conditions. Consequently, the visual signature of your position will be much harder for others to see and identify.

The muzzle brake redirects the escaping gasses to the sides (180 degrees from the shooter) reducing the rearward recoil of larger caliber rifles. The reduction in recoil allows the shooter to retain better control of the weapon for follow-up shots.

Does a Muzzle Brake Hide Flash?

Muzzle brakes are not for everyone. In all fairness, muzzle brakes do have a couple of disadvantages. They add up to 3 inches of length of the barrel, will slightly reduce the velocity of the round, and they are LOUD.

They don’t necessarily make the shot louder, although it sounds that way. The reason why they sound so loud to shooters on the range is that a muzzle brake is designed to vent the gasses to the sides of the muzzle instead of just letting the gasses flow straight out of the muzzle.

Other shooters in close proximity will often find the sound to be louder than normal. This is typically a result of the shockwave being redirected to the sides as opposed to the sound itself.

Muzzle brakes can make rifles more accurate due to the reduction in recoil. Muzzle brakes allow the shooter to better track the flight time of the bullet and bullet impacts. Many Prairie dog hunters will use muzzle brakes on their 22 centerfire rifles in order to maintain their site picture after taking the shot.

Muzzle brakes are indispensable for military and law enforcement snipers as well as long-distance competition shooters who must keep their sight picture during recoil to observe the bullet strike. Just about all sniper rifles, even the heavier .308s that have reduced felt recoil, now come with muzzle brakes as part of the build.

Does The Military use Muzzle Brakes?

The Army is testing a muzzle device called the Smuzzle. It’s a hybrid design that reduces sound, brakes recoil, and suppresses the flash. Three Army researchers developed the Smuzzle while working on the U.S. Army’s Next-Generation Squad Weapon (NGSW) program.

It’s a hybrid device that cuts half the volume at the shooter’s ear, reduces recoil by a third, and drops volume down range by one quarter, said Gregory Oberlin, a small arms engineer at the Army’s Combat Capabilities Development Center Army Research Lab.

The prototypes only add 3 inches to the overall length of the NGSW platform. The weight of the Smuzzle muzzle device is a half-pound for the NGSW, somewhat heavier for other weapons systems. The heavier weight is expected in order to sustain a 600 rounds per minute rating.

While the Smuzzle was purpose-built for machine guns, changing the dimensions and specifications is only a matter of scaling, Oberlin said.

What Flash Hider Does The Military Use?

The Vortex Flash Hider has been called the “most effective flash hider available short of a (sound) suppressor" because it reduced the flash by 99% during testing. Although the Vortex flash hider seems to be the superior option, many issued M4 and M16 variant rifles come with the A2 flash hider.

Is the A2 Flash Hider Any Good?

The A2 flash hider is a really good flash hider for several reasons. Yes, there are other flash hiders on the market that hide the flash a little bit better, but for the price of an A2 flash hider, you really can’t go wrong. It’s been a proven design for many many years before the market was flooded with many new designs. Some will say that the A2 flash hider sucks, but we disagree. Here’s why. The perfect combination of usability, versatility, and recoil reduction. Designed by Faxon’s competition staff, the 3 Ports conclusively capture propellant glasses and redirect them to the sides for maximum recoil reduction.

Made from high-quality steel with Nitride Finish, the Gunner features "Muzzlok" for easy installation of your device. No crush washer is needed, attach and remove in the field, and time your muzzle device quickly and easily! Used by US armed forces worldwide, the US Dept of Homeland Security, and law enforcement agencies across the nation, the Vortex flash hider features a patented 15-degree, right-hand helical flute design that effectively eliminates muzzle flash.

Machined from ordnance grade 8620 steel and finished with a mil-spec phosphate, the Vortex is a self-tightening flash suppressor that will not loosen or shift position under sustained fire. $71.49
at Brownells
VIEW DETAILS
Prices accurate at time of writing

ZERO flash. Nada. None. Designed specifically for .223 caliber (and 5.56 too, of course…) weapons with a 1/2×28 TPI muzzle thread, the Eclipse Flash Hider doesn’t just reduce flash, but eats it up entirely leaving nothing but the darkness of the night when shooting.

Both in internal and independent testing, we and others have not found a single brand or bullet weight of ammunition that produces any sort of flash with the Eclipse Premium Flash Hider. 55 grain XM193, 75 grain Privi Partizan, even your crap 55 grain Wolf Military Classic. The only way you know the rifle was fired is from the sound. 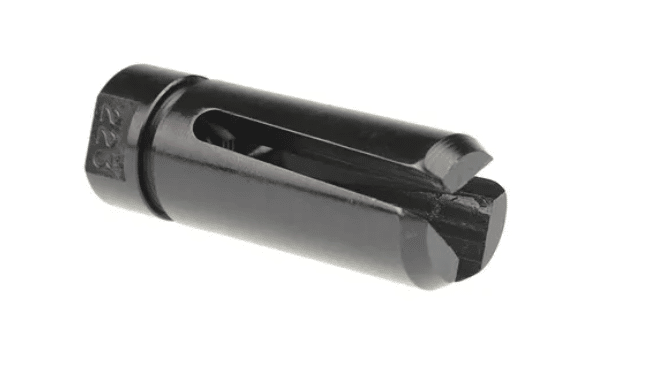 Choosing a muzzle device will depend on your intended use. If you’re going to be shooting at night, you’ll likely want a flash hider to retain your natural night vision and reduce your visual signature. Competition shooters and MIL/LE might prefer a muzzle brake.

Check out our article on the best flash hiders for your AR-15.