After Smith & Wesson acquired Gemtech and moved the company across the US, Maxim Defense hired much of the talent that they left behind in their wake.

Phil Dater is one of those people.

Phil was one of the brains behind Gemtech, and his private consulting practice with Antares Technologies has done a lot behind the scenes for the modern small arms industry with an emphasis on making those small arms quiet.

Michael Windfield, founder and owner of Maxim Defense, said "We do the hard stuff first."

Having checked that box, they began the development of a full line of suppressors.

The Department of Defense has a goal to suppress all the weapons in use by SOCOM by 2026. The DoD is expected to release its official solicitation soon, so Maxim Defense is making sure they are poised and ready.

One of the driving factors behind the Maxim Defense suppressors is the safety of the end-users.

Yes, making the weapons quieter allows them to be harder to detect and contributes to mission success, but what about the physical effects on the shooter’s hearing?

With an estimated $75 billion a year being paid out for hearing claims and concussion-related injuries, Maxim Defense is ensuring its suppressors function at or below "hearing safe" levels. OSHA’s hearing safe threshold is 140dB.

Maxim Defense suppressors drop the sound levels well below the OSHA hearing safe threshold. For example, the average measurements taken per MILSTD-1474D during testing of the DSX-D suppressor were 134dB on a 10.3" AR-15 chambered in 5.56 and 114dB with the DRF-22 rimfire suppressor. These sound levels were measured at the shooter’s ear.

The suppressor consists of a three-piece MonoKore design that adds 7.25" to the muzzle of your rifle. The DSX-D is rated for full auto in all available calibers; 5.56mm, 7.62mm, and 6.5 Creedmoor.

There is, however, an 8.5" barrel restriction. Additionally, the suppressor can be pinned to a 10.3" barrel to essentially give you a 16" overall barrel length. 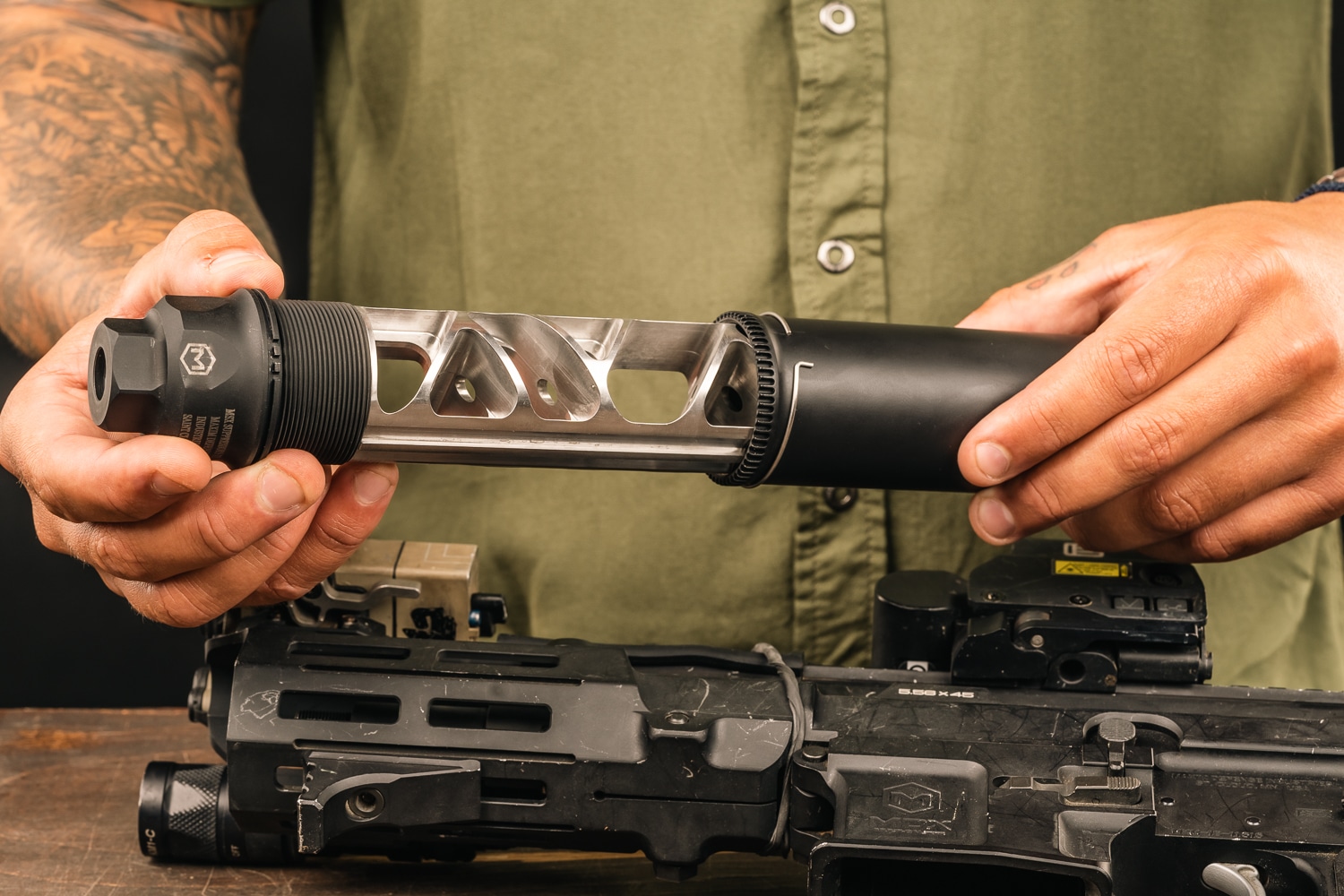 Duty built for the world’s most rigorous demands, this suppressor is designed to be the most robust and strongest suppressor in its category.

It has been repeatedly tested with SOCOM tables across a variety of calibers and barrel lengths, down to 8.5" 5.56 NATO with M855 ball ammunition, and has survived with no damage or significant change in sound reduction.

SOCOM Firing Table test is conducted using 8 fully loaded 30-round magazines, fired sequentially at different rates, from 1 round per second to a full auto mag dump.

The DRF-22 (Direct Thread Rimfire) Suppressor is specifically designed to minimize the increase in cyclic rate and gas blowback of a suppressed rimfire firearm.  Primary design features include the significant reduction of sound signature, decreasing flash signature, reduction of recoil, and an increase in accuracy. There are three design features that stood out as we spoke with the guys who were involved in the development of these suppressors. 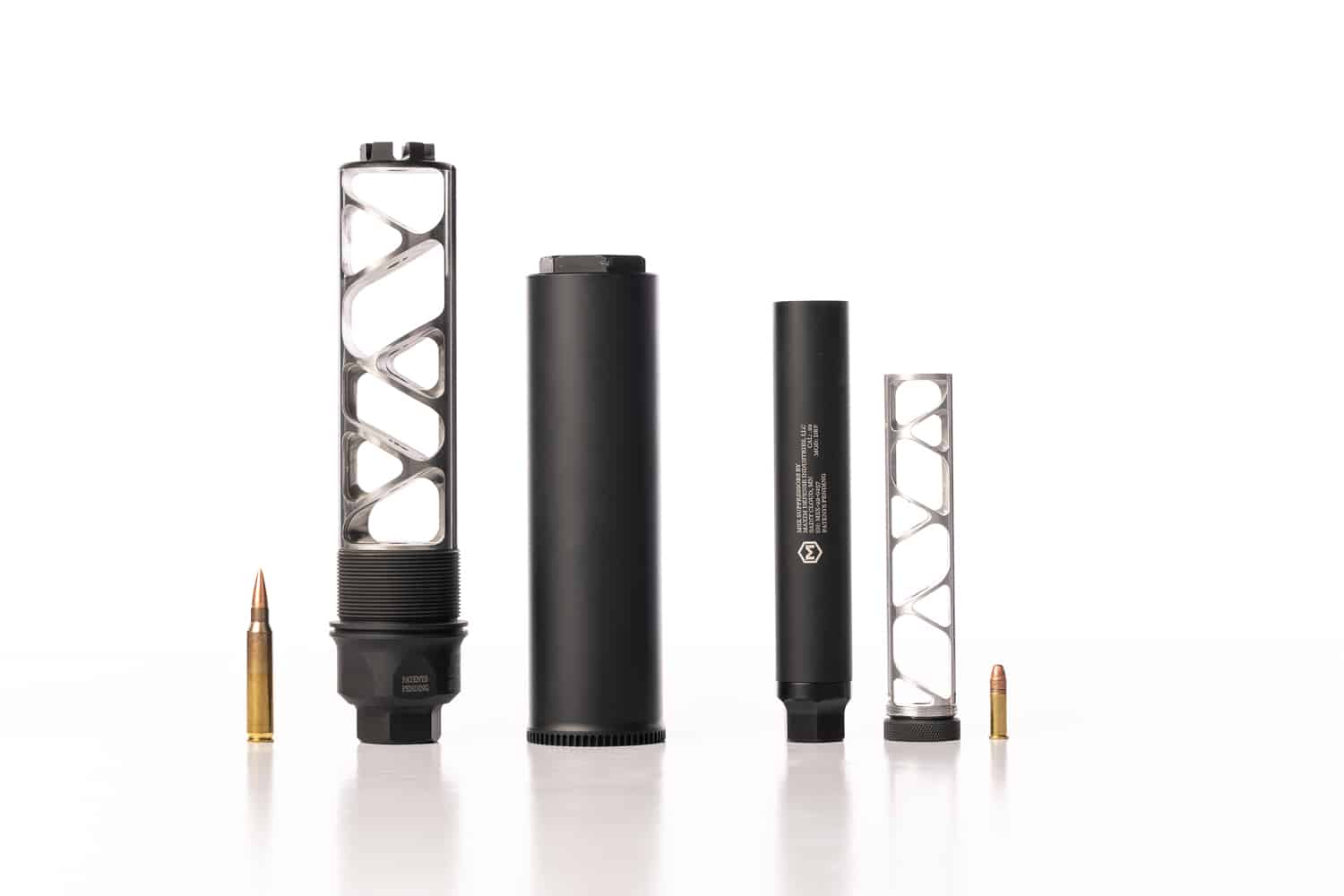 First, they are user-serviceable meaning that you can disassemble and clean the suppressor without having any specialized tools or having to send it into Maxim. If the core itself becomes compromised from a bullet strike, all you have to do is remove the core from the tube and send that part to Maxim. No need to send in the serialized part and have to deal with the red tape of replacing that.

Second, the suppressor tube has an integrated carbon scraper. As you unscrew and pull the tube from the core, it scrapes any excess carbon from the internal core of the suppressor.

Third, with some other suppressors on the market, after running a lot of rounds through them, the threads tend to lock up and you cannot remove the suppressor from the gun. Maxim Defense has put the time into their thread design to ensure the suppressor stays secured to the weapon at all times, but when the time comes to remove it, it will unthread with minimal effort.

In short, Maxim Defense is not just another gun manufacturer. They have become a leading defense development company.

After getting a glimpse of the new line of suppressors to be released throughout 2022, it comes as no surprise that they are on a trajectory to remain a leading development company for SOCOM and other military units.

To learn more about Maxim Defense Industries, visit their website at https://www.maximdefense.com/.