The two most common ways of compromising your firing position are the audible sound and visual flash from firing a round.

The obvious solution to suppressing both is through the use of a suppressor.

If you live in an area that does not permit you to legally own a suppressor or you just don’t want to go through the red tape of submitting paperwork and paying a $200 tax stamp on top of the cost of the suppressor, the next best thing to do is suppress the flash. How Do Flash Hiders Work?

Flash hiders work by “hiding" the muzzle flash (burning gases exiting the muzzle of the gun) or redirecting it through chambers in a muzzle device. Many newer flash hiders double as muzzle brakes since there can be considerable overlap in design features, but we’ll get into that later on in the article.

With these short-barreled firearms, less powder is burnt before the bullet exits the barrel, creating an expanding cloud of powder resembling a fire-breathing dragon. 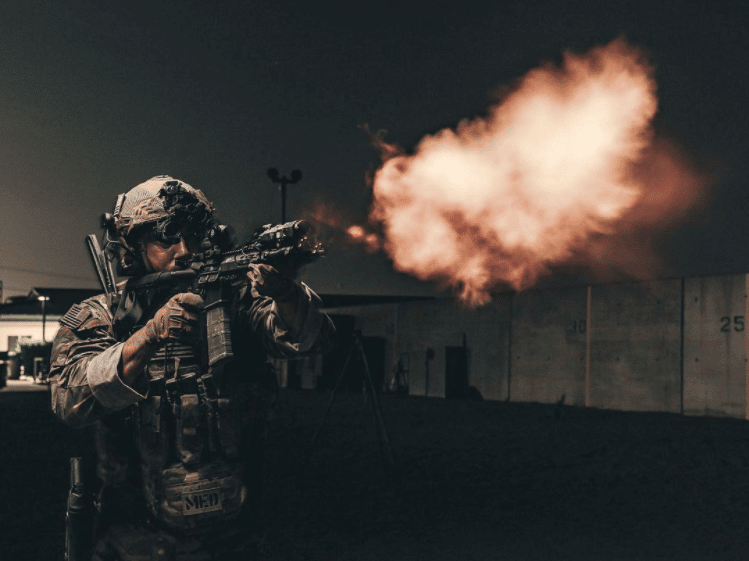 The sole purpose of flash hiders is to reduce the visible muzzle flash in the shooter’s face, protecting their night vision whether that is your natural night vision or shooting under nods, and aiding in faster more accurate follow-up shots in low light conditions.

Which is Better? Muzzle Brake vs Flash Hider

Many people may not know the difference between a muzzle brake and a flash hider, may have wrong information, or just may not see why it matters.

Despite the two muzzle devices looking like the same thing, they serve very different purposes, and they can range anywhere from $10 to $150.

So what’s the difference between a muzzle brake and a flash hider? $79.95
at AT3 Tactical
VIEW DETAILS
Prices accurate at time of writing

What is a Muzzle Brake

Although construction varies, the primary identifying characteristic of a muzzle brake is a series of cutouts or ports that direct the burning gases and muzzle blast away from the shooter and most often to the sides of the rifle or 180 degrees from the muzzle itself.

Since most felt recoil from an AR-15 originates at the muzzle, the design intent of the muzzle brake is to reduce recoil.

And since recoil is significantly reduced, an indirect benefit of the muzzle brake is accuracy and faster follow-up shots.

What is a Flash Hider

A flash hider is used to conceal the shooter’s firing position from visible flash. In order to negate this burst of visible light, flash hiders create turbulence at the muzzle.

By mixing the hot gasses with cooler ambient air in a disruptive pattern, the large flash or glow commonly seen when shooting is all but eliminated. This is especially important in low-light or nighttime shooting to preserve night vision. The obvious secondary benefit of a flash hider is that it also greatly reduces (and in some cases eliminates) the flash signature that others see.

How to Remove an A2 Flash Hider

Removing the old A2 flash hider is an easy process with a few simple steps and tools. Once you’ve separated the lower receiver from the upper receiver, remove the bolt carrier and charging handle.

Although there are plenty of videos out there showing how to remove the A2 flash hider without any specialized tools, I prefer to do it the right way the first time as to not damage my expensive gun. I prefer to use the Wheeler AR-15 Upper Vise Block to secure the upper receiver in a vise.

Once secured in the vise, use your armorers wrench to break the A2 flash hider free.

Once you’ve broken it free, unscrew it the rest of the way, exposing the barrel threads. Be sure to remove the old crush washer. Crush washers are a one-time-use item.

Before threading on your new flash hider, you’ll need to either install a new crush washer or timing shims. This will be dependant on the type of flash hider you bought.

If your flash hider needs to be timed, you need to determine how many shims are required for the proper timing before using your torque wrench.

Related Article – Top 5 Must Have Tools For Your AR-15

How to Time a Muzzle Device

Indexing or timing your muzzle device correctly can determine whether your shooting experience is an enjoyable one or not.

A muzzle brake is designed and constructed with the intention of routing the gasses through the primary ports that run side-to-side (as opposed to up and down) of the shooters’ line of sight.

When you screw a muzzle brake onto a threaded barrel, the brake might not align properly for those ports to be horizontal. In order to make them line up correctly, you must use shims to time the muzzle device.

In other words, you’re indexing the muzzle device, so that the ports direct the gasses in the correct direction.

Also, keep in mind that not every muzzle device needs to be tuned. If the ports or forks of the muzzle device are evenly spaced apart, then no timing is necessary; just a crush washer is needed.

Now that we know how to remove a muzzle device and install a new one, it’s time to go shopping!

Which Flash Hider Should You Buy?

This one is at the top of the list for good reason. The Manticore Arms Eclipse Flash Hider damn near eliminates muzzle flash altogether. From the manufacturer’s claims to the physical proof from many shooters, it seems to outperform almost all the other flash hiders on the market.

ZERO flash. Nada. None. Designed specifically for .223 caliber (and 5.56 too, of course…) weapons with a 1/2×28 tpi muzzle thread the MA-6450 Eclipse Flash Hider does not just reduce flash, but rather eats it up entirely leaving nothing but inky, black night when shooting. Both in internal and independent testing, we and others have not found a single brand or bullet weight of ammunition that produces any sort of flash with the Eclipse Premium Flash Hider. 55 grain XM193, 75 grain Privi Partizan, even your crap 55 grain Wolf Military Classic- the only way you know the rifle was fired is from the noise!

From that above video, product description, and affordable price point,  how could you not want this on the muzzle of your AR-15?!

The Bravo Company USA Comp MOD 1 is half compensator and half flash hider. It combines the three-pronged design of most flash hiders with the timed porting of a compensator.  This design not only does a fantastic job of reducing flash signature but also reduces much of the vertical recoil.

Is the MOD 1 as good as some of the more aggressive comps out there? No. But it’s doing so much more than just being a comp.

Even the best compensators on the market spit out a huge fireball.  Not so with the BCM Comp MOD 1. This thing is a flash hider more than most flash hiders.

The MOD 1 is considered a working man or woman’s comp, and it is a great compromise between the stealth and preservation of night vision and recoil reduction. $94.99
at Brownells
VIEW DETAILS
Prices accurate at time of writing

Early on in the flash hider game, the Smith Enterprise Vortex Flash Hider was the standard most flash hiders were compared against.

The prongs of this flash hider were designed and engineered through some truly exhaustive testing to disperse the gasses and unburned powder, while also providing a larger surface area to absorb the heat from the rapidly expanding gasses as they exit the muzzle.

What you’re left with is one of the better-performing flash hiders out there, even if it doesn’t do anything to reduce recoil. $64.99
at Brownells
VIEW DETAILS
Prices accurate at time of writing

The Daniel Defense Superior Suppression Flash Hider is designed to effectively eliminate the flash signature on your AR-15 and improve your night vision as well as conceal your firing position in dark and low light environments.

It features forward-slanting ports around its circumference to help direct muzzle blast and hot combustion gases forward and away from the shooter. This allows your muzzle to stay flat without an obnoxious side blast or blinding muzzle flash.

$58.00
at AT3 Tactical
VIEW DETAILS
Prices accurate at time of writing

Flash hiders help to preserve your natural night vision in complete darkness and low light, such as at dawn or dusk or after dark. The muzzle blast of an AR-15, especially a short-barreled carbine, can be highly disorienting or temporarily blinding at night.

The flash hider reduces the flash signature by dispersing and cooling the hot, high-pressure expanding powder gases as they exit the muzzle. While a flash hider is distinct from other muzzle devices, such as compensators and muzzle brakes, they sometimes overlap.

The flash hiders listed above are the best on the market at doing their job. Do your own research and determine which one best suits your needs. You won’t be disappointed with any of these options listed above.