I’m sure, by now, that you’ve all heard about the ATF pushing new AR pistol laws by taking on braces.

Even though this is a known thing, it can also be very confusing to cut through all the noise and truly understand what’s going on. We’re here to help shed some light on these murky waters.

So where does the ATF stand on braced AR pistols? Let’s first revisit the difference between pistol braces and rifle stocks. From there we will get into the newly proposed points system, what it means to you, and what your options are.

Unfortunately, there’s a lot of confusion about what makes a pistol brace a pistol brace and not a rifle stock because they look pretty similar when you’re looking at a fully assembled firearm.

So, to make things a little simpler, an AR pistol brace has a hole in it and typically has a Velcro strap that’s intended to wrap around the arm. A pistol brace doesn’t actually have to be velcroed to your arm though, it just has to work as a brace, meaning it can sit against your arm providing an additional point of contact to stabilize the firearm. Is shouldering a pistol brace legal?

Yes, the short answer shouldering a pistol brace without a tax stamp is legal by federal standards. However, let’s get a little deeper into the legalities because who doesn’t like doing that?

Like we said (as of this publication), shouldering a pistol brace does not make it a SBR, which means you don’t have to purchase a tax stamp and register it with the NFA.

What makes a pistol brace illegal?

Re-configuring your pistol brace to be a shoulder stock could get you in a little bit of hot water.

What does re-configuring a pistol brace look like, according to the ATF’s open letter? Glad you asked.

Examples, as given by the ATF:

Again, you must do things like this and ALSO shoot it from the shoulder-fired position. These are also just examples from an open letter and have not become legally binding—as a reminder, this could change after we get this article published.

So, what makes a pistol brace not a rifle stock since they can technically serve the same purpose?

Well, according to the ATF, it has not been re-configured for shoulder-fire, even if that’s how you use it. Why? Because apparently, it’s not intended to be shot that way, and it’s also not comfortable (subjective).

So, if you don’t reconfigure the thing, you are good—according to an open letter published by the ATF that is not legally binding but could change at any given moment. With that, I’d like to take a moment to tell you, stay up to date on federal and state gun laws so you don’t find yourself in a bind with the feds.

Yes, you can technically fire just about any weapon with one hand—safely, comfortably, accurately…that’s a different story, and it’s not how the gun gods determine the difference between tax stamp worthy and non-tax stamp worthy.

As soon as you place a rifle stock on anything that has a barrel length less than 16-in., then you’ve created yourself an SBR, and you better had received your tax stamp before you did it, or you’re committing a federal crime. $69.99
at AT3 Tactical
VIEW DETAILS
Prices accurate at time of writing

The big difference, rifle stocks were not intended to act as a brace that sits on or against your forearm. They’re intended for shoulder-fired use, and when you start shortening your barrel so that it falls outside of the "rifle" definition, you are, in turn creating an SBR.

Now that we’ve covered what makes a pistol brace a pistol brace let’s look at what makes a rifle stock a rifle stock. The short answer, it’s intended to be fired from the shoulder to absorb the recoil. As soon as you place a rifle stock on anything that has a barrel length less than 16-in., then you’ve created yourself an SBR rifle, and you better had received your tax stamp before you did so, or you’re committing a felony.

For more detailed information on the differences and the legalities that separate the two, visit our article on The Difference Between an AR-15 Pistol and a Short Barrel Rifle (SBR). 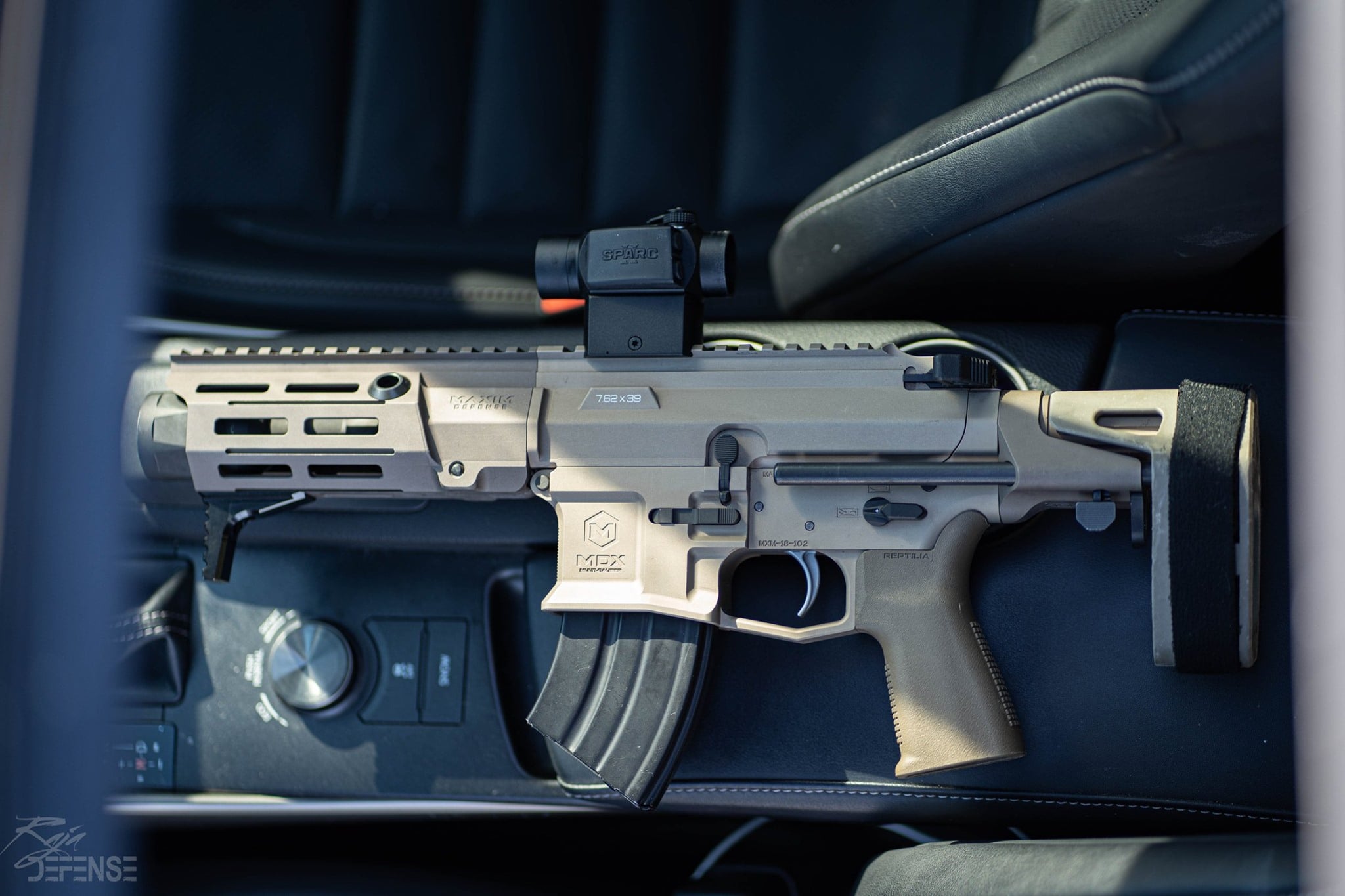 Why Would I Choose an AR Pistol over an SBR Rifle?

The primary reason for going the AR pistol route is that they undergo the exact same process as a regular pistol, rifle, or shotgun purchase.

You roll up to your local FFL to choose your model or purchase online and ship to a registered FFL to handle the transfer. It’s that easy. No lengthy waiting periods and no $200 tax stamp fee.

AR pistol braces can also be legally purchased at your local gun shop or online and added to an existing AR pistol by the owner. Again, no extra steps like you’ll see with an SBR rifle purchase.

Thanks to the ATF and their newly proposed points system, your AR pistol with a legally installed pistol brace may soon be considered an SBR rifle.

Is the ATF Banning Pistol Braces

The following rule (proposed June 7, 2021) outlines the factors ATF would consider when evaluating firearms equipped with a purported "stabilizing brace" to determine whether these weapons would be considered a "rifle" or "short-barreled rifle" under the Gun Control Act of 1968, or a "rifle" or "firearm" subject to regulation under the National Firearms Act.

There has been, however a bill introduced into the Senate to prevent the ATF from going after pistol braces and firearms attached with braces. That is bill S4069 which is known as the Pistol Brace Protection Act. The bill is set to eliminate subjective standards, which is how the ATF crafts most of its papers; subjective and open to interpretation.

What is Proposed in this Rulemaking?

The implementation and enforcement of the new point system for AR pistols, which is the ATFs way to reclassify all our AR pistols into short-barreled rifles, starts in August 2022.

In other words, the ATF is expanding the scope of what falls under its guidelines and is likewise subject to NFA rules and regulations.

To accomplish this, the ATF proposed a points system (Factoring Criteria for Weapons) to help gun owners determine whether their builds fell into SBR territory and would, therefore, be swept under the National Firearms Act. (Remember, an NFA designation means longer wait times, more paperwork, and a $200 tax stamp fee.) How does the ATF Points System work?

The new ATF points system starts by requiring the firearm in question to at least weigh 64ounces (4 pounds) and have an overall length between 12 and 26 inches.

This starting point ensures you’re working with a non-NFA firearm out of the gate. If it’s an NFA firearm under another category, then you need to apply for a $200 tax stamp regardless.

After making sure you’re not beginning with an NFA firearm, the checklist goes into other brace-specific features. $1,302.99
at GUNS.COM
VIEW DETAILS
Prices accurate at time of writing

One question you’ll see is whether the attached brace is intended to be fired from the shoulder.  The idea is that if the brace has the ability to act like a rifle stock, then it should be considered an SBR instead of an AR pistol with a brace.

Even portions of the brace like the "rear surface area" are assigned points to determine if there is sufficient surface area on the rear to be used on the shoulder. The ATF, though, does not specify a quantitative number of the size of the surface area.

This ambiguity provides a lot of freedom to the ATF to arbitrarily decide whether or not you have an AR pistol or SBR rifle.

This checklist also goes through the different types of stabilizing support that pistol braces offer, including the counterbalance, fin-type, and cuff-type braces thus assigning points to them.

If your checklist results in too many points, you lose the game and your AR pistol with the stabilizing brace falls into SBR rifle territory.

What Happens If These New Regulations are Passed into Law

Should the proposed regulations pass and go into law, gun owners would see a few things change in regards to ownership of these platforms.

Under the new ATF points system, you have a few options if your AR pistol fell into SBR territory.

So basically your options are to have a non-braced AR pistol, have a standard rifle, or pay the $200 tax stamp on the SBR rifle. Not the best options to choose from. Maxim Defense, however, has developed a Pistol System that allows you to run an AR Pistol by going to a buffer tube solution; Maxim Defense Pistol System.

The Maxim Defense Pistol System is an alternative to the AR pistol brace. With the new proposed regulations by the ATF, it’s becoming increasingly difficult to build an AR pistol and keep it legal. With all the gray area verbiage it can be frustrating not knowing if your new AR or AK pistol is legal to own or if you’re unknowingly committing a felony.

The ATF, as stated above, said “This proposed rule would not affect "stabilizing braces" that are objectively designed and intended as a "stabilizing brace" for use by individuals with disabilities, and not for shouldering the weapon as a rifle." If that is the case, then the Maxim Defense Pistol System is your answer to staying legal.

The installation of the Pistol System takes less than 15 minutes, and you don’t have to worry about the gray area with pistol braces any longer. As the ATF zeroes in on more draconian AR pistol laws, now is the time to make the move to the Maxim Defense Pistol System.