It’s something out of a bad dream.

You awake in the middle of the night, maybe you heard the front door get kicked in, or maybe you hear unfamiliar voices in the next room as unknown people move through your house.

It’s a break-in or a home invasion, and now you’re in a fight for your life.

In this scenario, you want to have the best handgun for home defense possible.

Our Top Picks For the Best Handguns For Home Defense

There’s almost no list of handguns imaginable that doesn’t include some flavor of 1911.  The Sig Sauer Emperor Scorpion is a fantastic example of the venerable 1911 platform. $1399.99
at Guns.com
VIEW DETAILS
Prices accurate at time of writing

The only things holding it back?  The 8-round magazine capacity, and the fact it’s the most expensive gun on this list.

Available in either .45 ACP or 9mm with 10- or 17-round capacity respectively, the Ruger American starts off with some versatility. $449.99
at Guns.com
VIEW DETAILS
Prices accurate at time of writing

The trigger took me some getting used to but lends itself well to accurate shooting.  Some of the best groups I’ve ever shot from a handgun came from a T&E Ruger American, with budget ammo.

The Glock 43x was a big hit at SHOT Show upon its release.  At the SHOT range day, the line to try this new, slim-gripped pocket rocket was one of the longest all day.

Designed for concealed carry, the 43x combines Glock’s reputation for reliability with a slim profile and 3.39" barrel. 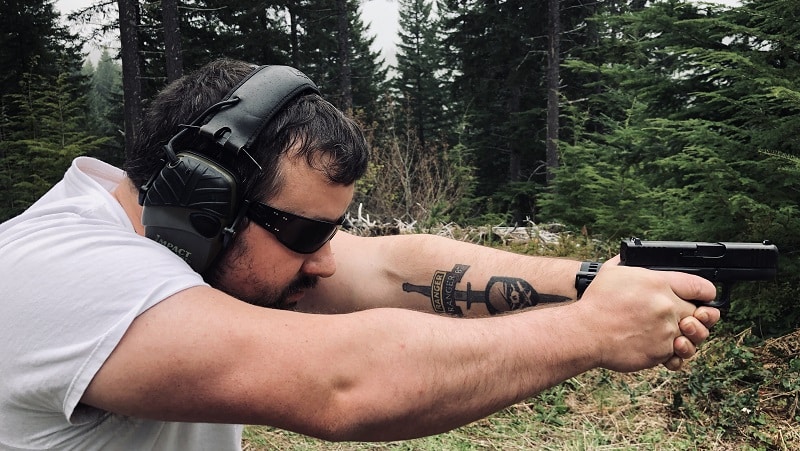 $448
at Brownells.com
VIEW DETAILS
Prices accurate at time of writing

While the OEM version only provides 10-round magazines, Shield Arms sells flush-fit 15-round mags.  The first version of the Glock 43x lacked an accessory rail for lights/laser, but more recent models include one.

Don’t let the 43x’s small size trick you into assuming it has far more recoil than a larger Glock.  The 43x has proven itself a relatively soft shooter, even to the point it’s preferred over the Glock 17 by my diminutive wife.

Really though, the Glock 43x is on this list because many who are looking to buy a gun for personal defense aren’t shopping for two guns, they want one that works as a carry gun and a home defense gun.  The Glock 43x fits that to a T.

The FNX-45 is a beast of a gun, carrying 15 rounds of .45 ACP inside its polymer grip frame.  With night sights, interchangeable backstraps, ambi controls, and an accessory rail, the FNX-45 brings all the features you’d want from a home defense handgun. $1199
at Brownells.com
VIEW DETAILS
Prices accurate at time of writing

The FNX-45 also comes with a threaded barrel and suppressor height sights, in the event you choose to use a suppressor.

The DA/SA trigger will take a little getting used to if you haven’t trained up on one, but this is an accurate gun once you’re used to it.

When fully loaded, the FNX-45 is a hefty package, but it’s one I enjoy shooting and would happily trust as my home defense handgun.

Another offering from Fabrique Nationale, the 509 differs from the FNX-45 in a few areas.  These differences are primarily cost weight, and caliber, with the 509 coming in cheaper, lighter, and in 9mm, respectively.

Like with so many others on this list, the 509 Tactical has ambidextrous controls and interchangeable backstraps to customize your home defense handgun to fit your hand. $899
at Brownells.com
VIEW DETAILS
Prices accurate at time of writing

The trigger is exactly what you’d expect if you’re familiar with striker-fired pistols.  It is effective for combat shooting, but less so if you’re going to spend the day trying to punch bullseyes at the range.

The 509 Tactical comes with 17-round mags, with extended 24-rounders also available.

The 509 Tactical also comes ready to upgrade and accessorize, with a mounting platform for reflex sights, an accessory rail for lights/lasers, and a threaded barrel for a suppressor.

While the 509 Tactical didn’t win the contract for the US Army’s new service handgun, it reportedly had an excellent showing in the trials, proving itself a worthy candidate for your next home defense handgun.

The gun made famous after being adopted by the Navy SEALS, the Sig P226 MK25 is a dream gun for many and an effective choice for a home defense handgun.

Night sights and an accessory rail mean the P226 is ready for night fighting. $1245.99
at Guns.com
VIEW DETAILS
Prices accurate at time of writing

Aggressive texturing enhances the already excellent ergonomic shape of the polymer grip.  This also helps to further reduce the already mild recoil of the 9mm round.

15-round mags come standard in free states, meaning the Sig p226 MK25 mostly keeps pace with all the other 9mm’s in terms of capacity.

There’s a hell of a lot to like about the P226 MK25, the only thing holding it back from far more widespread adoption is the price.  Like with most things, you get what you pay for.  The Sig P226 MK is an excellent choice for a home defense handgun.

Here it is, the King of the Hill.  The Glock 34 represents one of the easiest guns to pick up and shoot quickly and accurately.  The long slide gives both a long sight radius and a low recoil impulse compared to smaller, snappier guns.

With three generations of Glock 34 to choose from, there are options regarding night sights, grip profile and interchangeable backstraps, and even the Modular Optic System for mounting dot sights.  All the variants available today fit in the $500-$999 range.

The Glock 34 is the largest-sized Glock chambered in 9mm, yet still weighs only 26 ounces, a full 8 ounces less than the P226 as one example.  This is certainly a problem for concealed carry, but as a home defense gun it is no liability.

17-round mags are the standard capacity for free state citizens. $999.99
at Guns.com
VIEW DETAILS
Prices accurate at time of writing

Besides Glock’s reputation for reliability and the Glock 34’s accuracy acumen, a primary consideration for naming this the #1 choice for the best home defense handgun is this gun’s consistency.

This gun chews through whatever ammo you like, from cheap FMJs to high-priced JHP rounds.  From +P to heavy subsonic rounds.  The Glock 34 handles them all with less change in recoil impulse compared to other guns.

When you wake up in the middle of the night to a life or death scenario, the Glock 34 is as accurate as a scalpel and as reliable as a rock.  You know exactly what you’re going to get out of this gun, and it won’t let you down.

Is a Pistol Enough For Home Defense?

Yes!  While a rifle or shotgun provides increased accuracy and lethality, a handgun is certainly enough to defend yourself with.  The best gun is the one you’re likely to have handy when you need it most.

Few people are willing to have a rifle or shotgun on standby near their bed at night, making a handgun more likely to be available.

What Pistol Caliber is best for Home Defense?

While caliber debates have raged for years, the most common defensive handgun round is 9mm.  This caliber offers a great balance of lethality, mild recoil, high capacity, and affordability.

In fact, the FBI cited 9mm outperforming .45 ACP in testing as one of the reasons the agency switched back to 9mm as its primary duty caliber. The truth is that either caliber with a quality JHP projectile is going to perform well.

For most shooters, I’d advise you to stay away from less common calibers, where scarcity and cost of ammunition may limit your practice reps.

Not necessarily.  The slight difference in lethality between common handgun calibers is overshadowed by the fact that they all pale in comparison to a rifle round or shotgun load.

A more important metric is accuracy.  Which do you shoot better?  Does arthritis necessitate a smaller caliber?  A hit from a moderate-caliber bullet beats a miss from a hand cannon every time.

Hollow points are designed to expand in the target, increasing both temporary and permanent wound cavities, and providing maximum threat neutralization.

When your life is on the line, don’t gamble with budget FMJ ammunition that may or may not stop an assailant. How To Choose a Home Defense Handgun

This is all or nothing.  If your chosen home defense handgun is finicky at times, or malfunctions occasionally, it is absolutely not the best choice.  No matter how expensive, cool looking, or popular it is, that gun is nothing more than a gamble.

If you have the chance to test fire a few guns side-by-side, one should stand out.  Certain recoil impulses feel better than others, and differing ergonomics will lead you to shoot more instinctively (and accurately) with certain handguns, no matter how they compare on paper.

Head to a rental range or call up a friend with a diverse handgun collection, and work on finding out which gun you shoot well.  Namely, one that fits your hand and feels like an extension of your arm.

If you’re like many gun collectors in this country, this consideration is already taken care of through years of comparison.  It’s always nice to get out and see what’s new though.

Picking one of the big two (9mm, .45 ACP) means you’ll rarely struggle to find ammo (and thus practice more), and have your choice between two calibers with a great deal of real-world data showing the effectiveness thereof.

Less common calibers can definitely be effective but are usually quick to disappear during ammo droughts as manufacturers lean in to produce mass quantities of the most common calibers. While many of us are great shots on the range under ideal conditions, real-world data shows hit percentages drop like a rock when we induce massive stress (like someone shooting back). The old Russian adage "Quantity has a quality of its own" rings true.

In 2005 and 2006, NYC police reported 17% and 28% hit rates for officer-involved shootings, respectively.  Is your recent training as involved as the NYPD’s?  Have you ever tried running a stress shooting course immediately after being woken up?

The bottom line, having more rounds available is an asset, even if you don’t end up needing them. If your home defense handgun has a light already mounted, that’s one more advantage on your side, especially if the light has an easy-to-engage strobe function for disorienting an attacker.

Bottom line, these lists are always subjective.  My experience with these guns will most certainly be different than what some of you will have experienced.

It’s hard to find two of these kinds of lists that agree with each other, which is why they make a good starting place for beginners and a good point of conversation for the more experienced.

Get out there, try a few guns, get some quality training, and rest easier knowing you’ve given yourself and your family a fighting chance.