What Set’s Maxim Defense Apart From Other Firearm Manufacturers?

Maxim Defense was created by Michael Windfeldt to accommodate the various mission needs and requirements of law enforcement, elite military units, such as the Army Special Forces (Green Berets) and Navy SEALs, and Executive Protection Details.

What was then developed for elite military units is now available to freedom-loving Americans in the form of the Maxim Defense PDX line and MD-1505 product line. 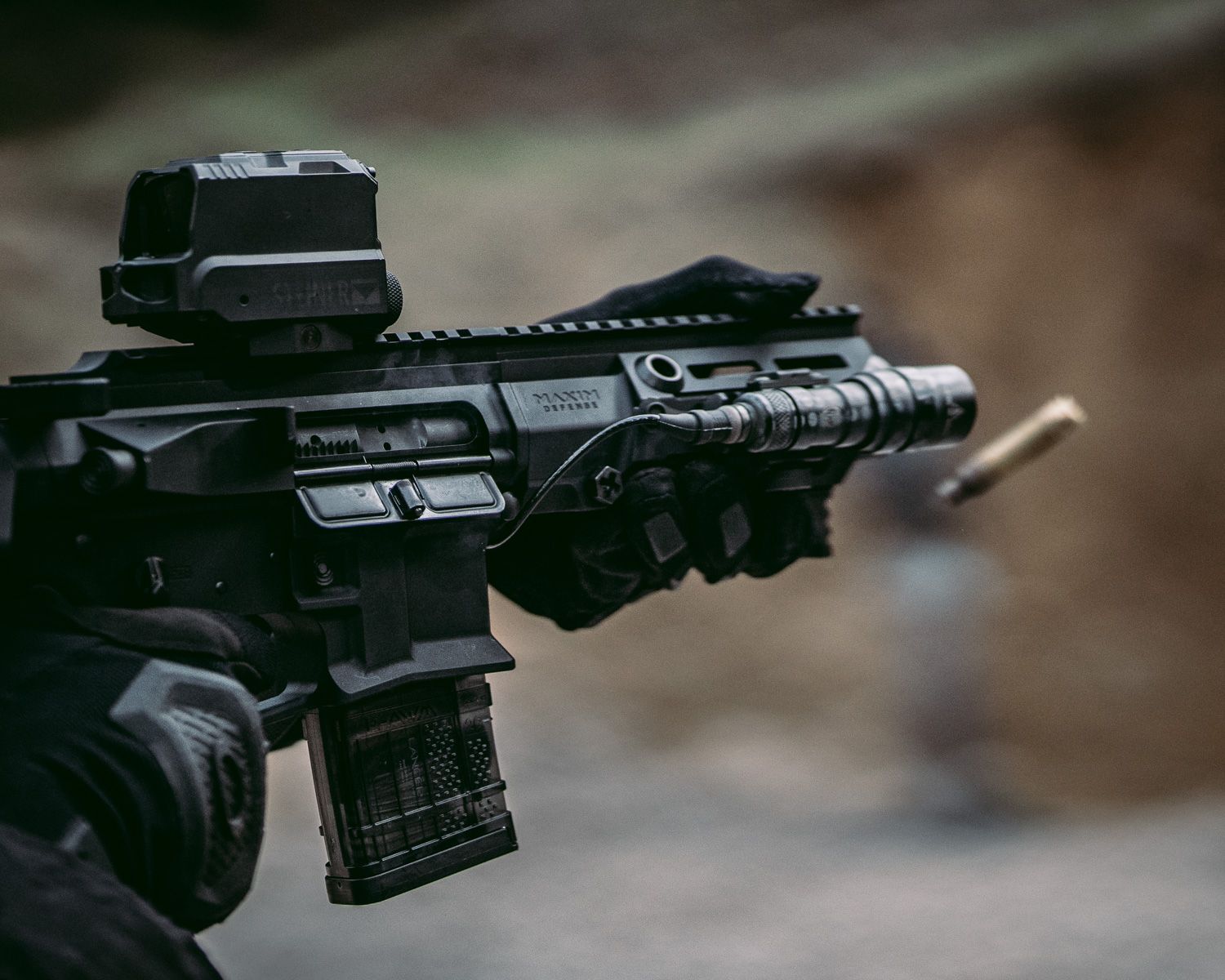 Let’s first briefly discuss who Maxim Defense is and then we’ll get into what makes their designs stand out from the competition.

Who is Maxim Defense Industries?

With the understanding that certainty in warfare is uncertain, Maxim Defense provides unparalleled versatility to meet the many needs of our nation’s elite military units.

From short-barreled rifles (SBRs) to AR-style pistols, Maxim Defense offers a tool for each mission requirement to enhance the effectiveness with shorter barrels, lighter rifles, and specific ammo that is designed to be more effective than standard off the shelf ammo.

The best feature of Maxim Defense weapons is that they’re able to provide soldiers with better mobility and more versatility, without sacrificing capability.

Some will argue that its product line is priced too high and that you can find comparable options at a lower cost. To that I say, you’re missing out on what truly sets them apart from those other brands. And that is the quality components ‘under the hood’ that drive their firearms with unparalleled reliability and accuracy.

So what are these quality components we’re eluding to that set Maxim Defense apart from others in the industry?

With more companies creating SBR rifles and AR-style pistols, one of the biggest problems, besides the ammo, is the issue of malfunctions and reliable cycling and extraction.

The HATEBRAKE redirects the sound of the gunfire away from the shooter, decreases the muzzle flash, and reduces the felt-recoil, which increases the accuracy of the weapon. The HATEBRAKE easily installs with a 3/8" drive socket in the front and locks into place with a patent-pending technology called, K-Taper.

This technology replaces the need for tapered barrels and ensures the muzzle booster is securely locked into place.

The most important factor in this handguard is that it’s free-floating, which just means that it’s not attached to the barrel. Free-floating upper receivers and barrels are common in the industry now, but not all are made of high-quality steel, like the Maxim Defense PDWs.

The free-floating handguard really helps with keeping the barrel cool during intense firing and assists in reducing felt recoil. To add to the features, the Slimline handguard comes with M-slots wrapping around the entire handguard for unlimited weapon attachment configurations.

A final touch that I really love is the QD sling slot for optimal comfort, mobility, and practicality when your weapon is harnessed. The only size that doesn’t have the QD sling is the 5.5" Slimline, but the 8.5", 10.3", and 11.5" handguard has the QD slot.

The trigger components have a special coat of hard lube that keeps the components moving freely, without attracting abrasive chemicals, carbon, or debris for the firing operation.

Many stock triggers are polished and brushed clean from the manufacturing process, but very few companies put the time into polishing the sears until they’re smooth and shiny, like Geissele and ALG.

The whole point of the ACT is to provide a trigger that can handle the elements of the planet with corrosion-resistant springs and is durable enough to handle drops and the daily life of a soldier in austere environments.

The ALG trigger is built from 8620 alloy steel military specification castings, and tempered to increase the surface hardness of the trigger. 8620 steel provides a great combination of surface hardness and wear resistance. Many people have at least heard of Maxim Defense, but not many people even know they sell ammo. $33.99
at GUNS.COM
VIEW DETAILS
Prices accurate at time of writing

Maxim Defense ammunition is manufactured with copper, instead of brass because as we all know, copper can handle heat better than almost any metal on Earth. By using copper, Maxim Defense was able to ensure the added velocity is safely contained inside the copper case. The Tumble Upon Impact (TUI) technology used in the Maxim Defense ammo makes me think of the iconic M16 used in Vietnam.

One reason the M16 was so effective was the tumbling effect of the bullet that causes extreme damage upon impact. It created a  wider wound cavity and the bullet tore through soft tissue like a boulder rolling downhill from a mountainside. This tumbling effect has given our soldiers an advantage to have an arm shot turn into a heart shot with all credit to the advanced ballistics. Simply put, there is no better ammo on the market for short-barreled firearms, especially purpose-built firearms such as the Maxim Defense PDX.

If you’re looking for a complete package ready to go out of the box with all these quality components, then the Maxim Defense PDX is your answer.

Very rarely will you ever find a rifle with a 5.5" barrel and an overall length of 18.75" that can fire everything from 5.56 to 300 BLK and the heavy 7.62mm round accurately and consistently without malfunction. The PDX is incredibly expensive at over $2,065 but gives every operator an advantage that really hasn’t been around until recently.

The Advanced Combat Trigger (ACT) from ALG Defense is an absolute game-changer for the PDX. It’s designed to be incredibly smooth by using precipitation hardened  17-4 stainless steel and polishing the sear surfaces until silky smooth. The trigger breaks at 6.0 lbs of force consistency without creep and an incredibly quick reset.

The Maxim Defense PDX allows every operator the advantage of using an SBR with the power of a traditionally much larger rifle. You can’t go wrong with Maxim Defense and I will bet my paycheck that this SBR gives you everything you need and desire for a unique mission requirement.

$2,524.99
at GUNS.COM
VIEW DETAILS
Prices accurate at time of writing

Chances are if you’re going to be using the Maxim Defense PDX for what it was intended for, you’re more than likely putting your life on the line. Do you really want to trust your life to something “cheaper" or do you want the best of the best?