Part 1: Fitness Tests From Militaries Around the World

The Canadian military has one of the more interesting fitness tests we found.  The military conducts the Common Military Task Fitness Evaluation (CMTFE). This test is comprised of six evaluations to include: 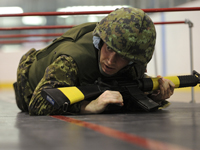 General: The escape to cover task was designed to simulate a situation involving small arms fire. During this event, a member must move quickly between points of cover to reach the safety of a bunker.

Task description: With a C7 rubber rifle, the participant runs 10m, stops and takes a knee for 7 seconds then continues to run 50m. The participant moves into a prone position to complete a low crawl (leopard crawl) under 7 hurdles spread out over a 10m mat. Once the participant has physically cleared the last 10m low crawl marker, the participant will get up and run 30m.

Minimum standard: The task must be completed in 68 seconds or less. 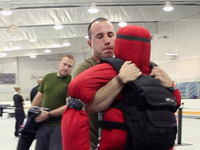 General. This task was designed to simulate the extrication and evacuation of a CAF casualty from the passenger seat of a Ford Ranger Style pickup truck during an international humanitarian operation.

Minimum standard: There is no time limit for completion of this task; performance is indicated by pass /fail. 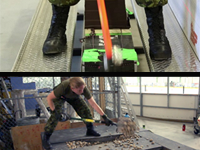 General: This task was designed to simulate the construction of a hasty ablution facility during the early stages of an international humanitarian mission; it is performed in two parts as picking and digging.

Fitness Tests from Militaries Around the World Part 2 | Israel

A 2-minute rest/water break is provided between completion of the picking task and beginning the digging task.

Fitness Tests from Militaries Around the World Part 3 | New Zealand 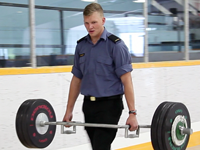 Using both hands, the participant lifts the EZ curl bar (21.5kg), up onto the 91.5 cm high platform.

Minimum standard: There is no time limit for completion of this task however the task must be completed without stopping or setting down the deadlift or EZ curl bars outside of the prescribed rest period. 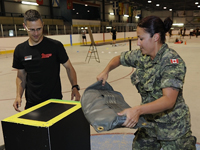 General: This task was designed to simulate the unloading and passing of sandbags from a pallet during a humanitarian (flood) or defense (fortification) scenario.

Task description: Participants lift a total of sixty 20 kg sandbags from a pallet and places each sandbag on the top of a 91.5 cm high platform. 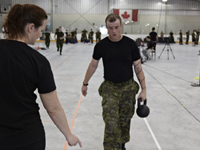 General. This task was designed to simulate the responsibility of one member of a multi-member team during the construction of a picket and wire fence.

Task description: The participant will make 23 trips carrying objects from a start point out to various points along a 35 m line. Weights of objects and methods of carrying range from 5.4 kg in each hand to 15.5 kg carried unilaterally.

The sequence of the task alternates between loaded and unloaded carries; to simulate picking up and dropping off equipment, returning to pick up another load of equipment until all of the equipment has been moved to the worksite.
The longest trips cover 70.8 m, with a total task distance of approximately 1.3 km.