Today, we’re talking about the alternatives to registering an SBR rifle and using an AR pistol brace.

The ATF has done an outstanding job at explaining the use of a pistol stabilizing brace; similar to watching those TED Talks on YouTube. At the end of the video, you’ve heard a bunch of great information, but are left with more questions than you started with.

Let’s take a closer look at how the ATF views pistol stabilizing braces and what our alternatives are if we want to cut through all the confusion.

Some of the documentation available has eluded to the ATF expecting your brace-equipped pistol to have a length of pull under 13.5 inches. Additional sources have said that the ATF frowns on AR-15 pistols with magnified optics unless it’s a forward-mounted long eye-relief optic such as the Crimson Trace Battlesight.

There are also rumors that the ATF doesn’t like braces on pistols weighing less than 40 ounces. See what we mean by all the ambiguity? It’s really difficult to know what to believe.

None of these rumors have been made public and there’s no way to know when the ATF has come up with new rules and regulations. It’s all kept very hush-hush unless you know where to look.

We’re not bringing this up to make any kind of political statement. But if you want to own a compact personal defense weapon, you need to know and understand the rules, and those rules are not always clear.

Until the pistol brace debacle is demystified, let’s take a look at what our options are. If you’re interested in owning a compact PDW firearm, there are four different ways you can go about it.

1. Ignore The Rules (NOT RECOMMENDED)

You could just ignore all of the laws completely. It’s easy to do. You just purchase an AR pistol and put a rifle stock on it. You don’t pay the $200 tax stamp. You don’t register it. The Federal Government doesn’t know otherwise. But seriously, don’t do that!

The ATF takes this stuff very seriously. If you’re convicted of violating the Federal ATF rules and regulations, you could face up to 10 years behind bars and fines up to $250,000 for each offense they find and convict you of.

And going forward you would be a documented felon, prohibited from owning and handling any firearms for the rest of your life. Needless to say, this is NOT a viable option.

2. Register as an SBR Rifle

You can go with a legal, registered SBR rifle. You can either buy one or build one. Either way, it will cost you $200 for the tax stamp.

If you buy an already built SBR rifle, that’s going to be an ATF Form 4. Form 4 usually takes at least a few months if not close to a year in some instances to get processed. After it’s approved, you can pick up the gun from your local FFL dealer.

If you build one from parts, that’s an ATF Form 1. Form 1’s generally get approved much quicker, sometimes in just three or four weeks. Building an SBR rifle can just boil down to you buying an AR pistol and then once your Form 1 comes back approved, you put a stock on the gun.

There are some drawbacks to taking the SBR route. The primary one is that you’re registering the gun with the federal government and you’re in the ATF database. That in itself doesn’t sit too well with a lot of freedom-loving Americans.

3. AR-15 Pistol with a Stabilizing Brace

With an AR pistol, you don’t have to deal with any of the red tape that comes with an SBR rifle. No registration or notification requirement for interstate travel. No $200 tax stamp. No wait times.

You have to be really careful about how that gun is configured though so that it remains legal. There are certain things you can do to an SBR rifle that you can’t do to an AR pistol.

The biggest disadvantage to an AR pistol with a stabilizing brace is that they’re kind of in a legal gray area that could change at any minute. Thank you, ATF.

What could and probably will change are the criteria the ATF is using to determine what is and isn’t considered a pistol brace and how a brace can be used. Or they could go with the nuclear option and just outlaw AR pistol braces completely.

The ATF doesn’t need new legislation from the government to do that either. They can just write some letters and boom; get rid of your AR pistol brace or you’re committing a felony.

The benefits of going with a pistol buffer tube configuration are that you don’t have to deal with any of the legal ambiguity.

The ATF, as of the date of this writing, has not hinted that they might want to reclassify AR pistols as SBRs when there is no brace involved.

To ensure you’re 100% legal with your AR pistol, you can install a pistol buffer tube on your AR if it doesn’t already have one. With the Maxim Defense CQB Pistol System, you can either use sling tension shooting or utilize the buffer tube for a cheek weld giving you an additional point of contact.

The SAS Sling Method boils down to the use of sling tension when you don’t have a stock, or can’t use a stock. This technique was originally based around 9mm subguns, like the HK MP5K and other stockless submachine guns.

In recent years it moved to AR and AK pistol platforms, albeit not designed for these heavier, harder recoiling guns. The SAS Sling Method shines with smaller Personal Defense Weapons (PDWs), pistol caliber carbines, and subguns.

What can I use as an alternative to a pistol brace?

The Maxim Defense Pistol System is an alternative to the pistol brace. With the new proposed regulations by the ATF, it’s becoming increasingly difficult to even build an AR pistol and keep it legal. It can be frustrating not knowing if your new AR or AK pistol is even legal with all the gray area verbiage.

The combination of the shooter’s arm at full extension and the resistance from the bungee-style sling creates a steady platform for added accuracy and control when shooting PDWs such as the Maxim Defense PDX SPS.

This is still your favorite compact PDX platform with the same reliability enhancing technology, but the PDX 505-SPS features our new SCW Pistol System in place of a rifle stock or pistol brace.

The SCW Pistol System is the newest and most streamlined option for the back end of an AR Pistol. No protruding angles and nothing to get caught on. At just 5.3 ounces, the SCW Pistol System shaves off over 10 ounces when compared to the Maxim Defense SCW Stock. the pistol system includes a rear single-point QD swivel mount, an ideal placement when using either a single-point sling or two-point sling. 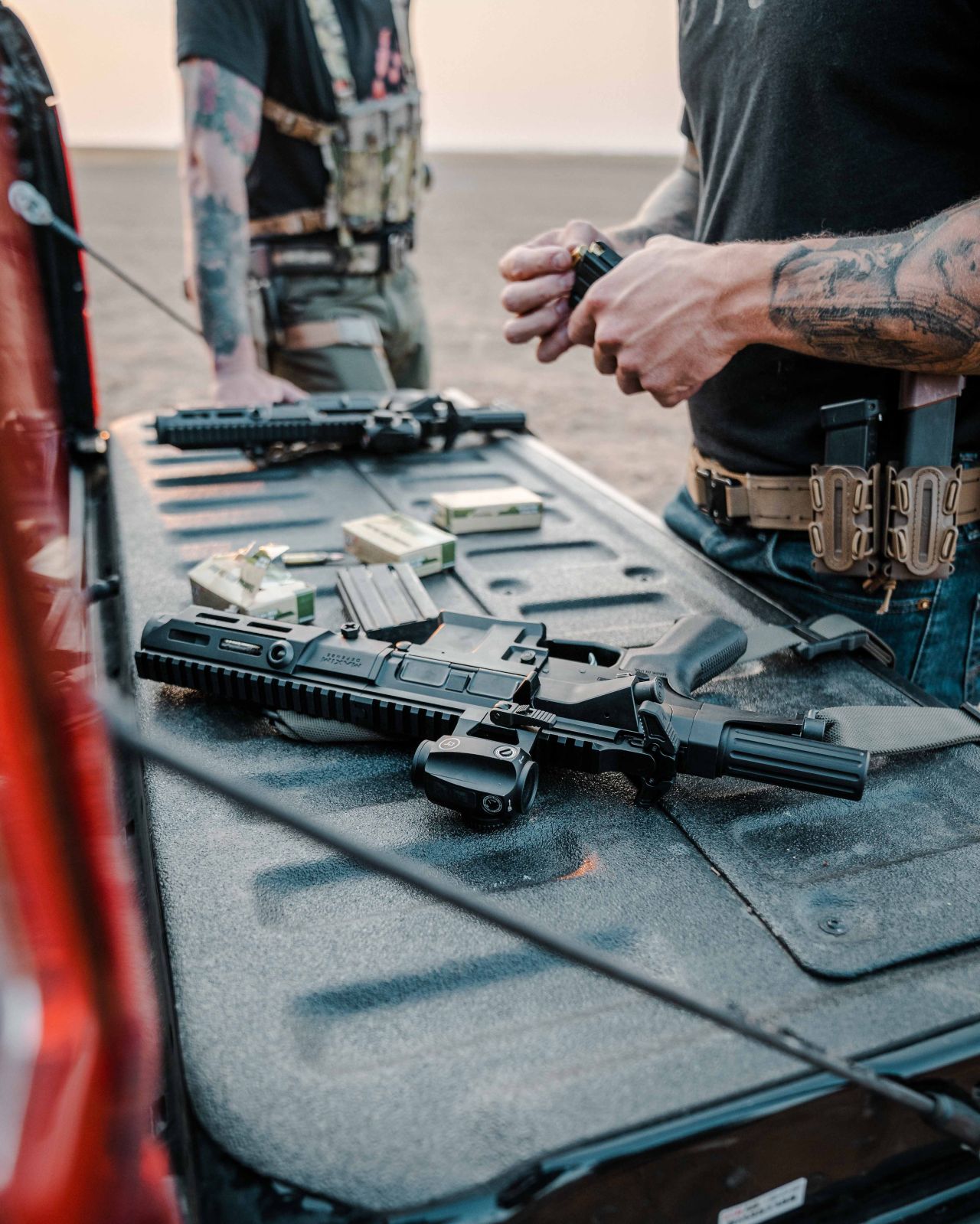 The Maxim Defense PDX SPS and Pistol System come with a housing that allows you to attach a sling via a QD sling mount for sling tension shooting.

The installation of the Pistol System and sling takes less than 15 minutes, and you don’t have to worry about the gray area with pistol braces any longer.

As the ATF closes in on pistol braces, now is the time to make the move to the Maxim Defence PDX SPS or upgrade your existing AR pistol with the Maxim Defense Pistol System.