Using a sling to increase stability and compensate for recoil on a stockless Personal Defense Weapon is not a new idea.

When I was on active duty in the Marine Corps and deployed to the Med for 6 months, I had some downtime for reading. Back then my two favorite books to read were Rainbow Six by Tom Clancy and Rogue Warrior by Richard Marcinko. In Rainbow Six, CIA operative John Clark forms a secret multi-national counter-terrorist unit known as Rainbow Six.

What really intrigued me while reading these books, was the unconventional techniques used for employing firearms and other tools of the trade. one of those techniques that Tom Clancy used in the novel was a way of employing subguns without a stock. This secret counter-terrorist unit used single-point slings attached to their subguns allowing them to better conceal them and effectively shoot them in close quarters. Richard Marcinko used the same sling method for SEAL Team 6 during ship boarding and assaulting oil rigs.

A Case For the SAS Sling Method

The National Firearms Act really is a drag for responsible firearms owners. Thanks to its legal restrictions on SBR rifles and AR pistols, these platforms are substantially restricted from common ownership in the United States.

The pistol caliber carbine and the PDW are the two most affected platforms of the NFA. Both are compact, easy to shoot and perform the best with barrels under 16″, which happens to be the length where the NFA cuts them off.

If we don’t want to go the NFA route and pay an extra $200 for a tax stamp, accept other legal restrictions, or worry about if our AR pistol setup is within the allowable point system of the ATF, what is our option? Your best bet is to employ the SAS sling method with one of the Maxim Defense Pistol System solutions.

The British SAS perfected this technique known as the SAS Sling Method for CQB and hostage rescue as seen in the below photo. Instead of physically pulling the stock back into your shoulder, you push forward on the weapon to increase sling tension.

What is the SAS Sling Method

Sling tension shooting, also referred to as the SAS Sling Method was first publicly seen in images of the British SAS storming the Iranian Embassy in London, though other counter-terrorism units have used it. Sling tension shooting is, as described by Larry Vickers, a push/pull method.

Looking at the photo of the SAS making entry during the Hostage Crisis, you’ll notice they are running MP5s with large top-mounted lights, three-point slings, and collapsed stocks. In extreme close quarters such as this hostage crisis, the British SAS preferred to keep the guns close and ready and preferred, in this situation, shooting with a sling over a rifle stock to control the MP5 subguns. Add to the complexity that they were wearing gas masks, a cheek weld on a stock would have been near impossible.

The SAS Sling Method boils down to the use of sling tension when you don’t have a stock, or can’t use a stock. This technique was originally based around 9mm subguns, like the HK MP5K and other stockless submachine guns. In recent years it moved to AR and AK pistol platforms, albeit not designed for these heavier, harder recoiling guns. The SAS Sling Method shines with smaller Personal Defense Weapons (PDWs), pistol caliber carbines, and subguns.

Here’s an explanation and demonstration by Larry Vickers on sling tension shooting.

The Maxim Defense Pistol System is an alternative to the pistol brace. With the new proposed regulations by the ATF, it’s becoming increasingly difficult to even build an AR pistol and keep it legal. With all the gray area verbiage it can be frustrating not knowing if your new AR or AK pistol is even legal.

The combination of the shooter’s arm at full extension and the resistance from the bungee-style sling creates a steady platform for added accuracy and control when shooting PDWs such as the Maxim Defense PDX SPS.

With the Maxim Defense CQB Pistol System, you can either use sling tension shooting as described above or utilize the buffer tube for a cheek weld giving you an additional point of contact. 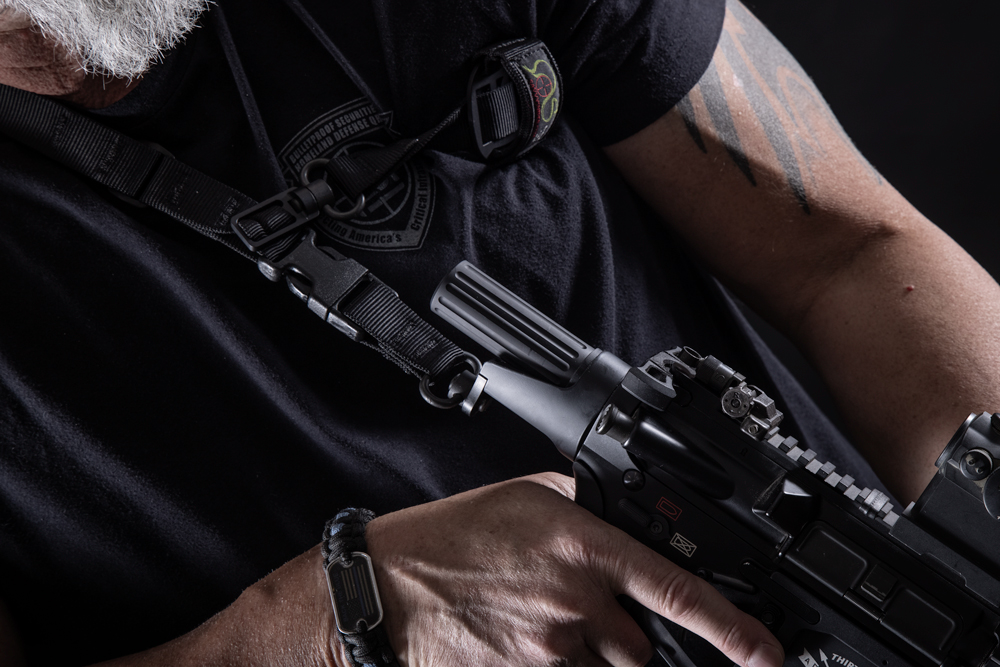 The Pistol System comes with a housing that allows you to attach a sling via a QD sling mount for sling tension shooting. The installation of the CQB Pistol System and sling takes less than 15 minutes, and you don’t have to worry about the gray area with pistol braces any longer. As the ATF closes in on pistol braces, now is the time to make the move to the Maxim Defence Pistol System.