If you ask some random guy off the street what the difference between a red and green laser is, they’ll probably look at you and say, “Ummm… one’s green and the other’s red??” And yes, it’s probably going to come out like a question rather than an answer. But truth be told, there are differences, other than the color that is. This blog will go into that.

Red lasers are pretty popular. Maybe it’s because of the movies; perhaps it’s because that’s where the laser industry got its start. Or maybe it has something to do with cost. But, one thing is for sure, just because something is idolized or cheaper doesn’t mean it’s a better product.

Disclaimer: I’m not saying green lasers are better than red. You can decide which is best for you, on your own.

There’s nothing wrong with mounting a red laser on your firearm. They’re great if you want a laser on your pistol, shotgun, or rifle. They can be cheaper, their battery-life lasts longer, and they work great in low-light settings. But, they’re not green. Here’s a list of the top 3 reasons green lasers differ from red laser sights. 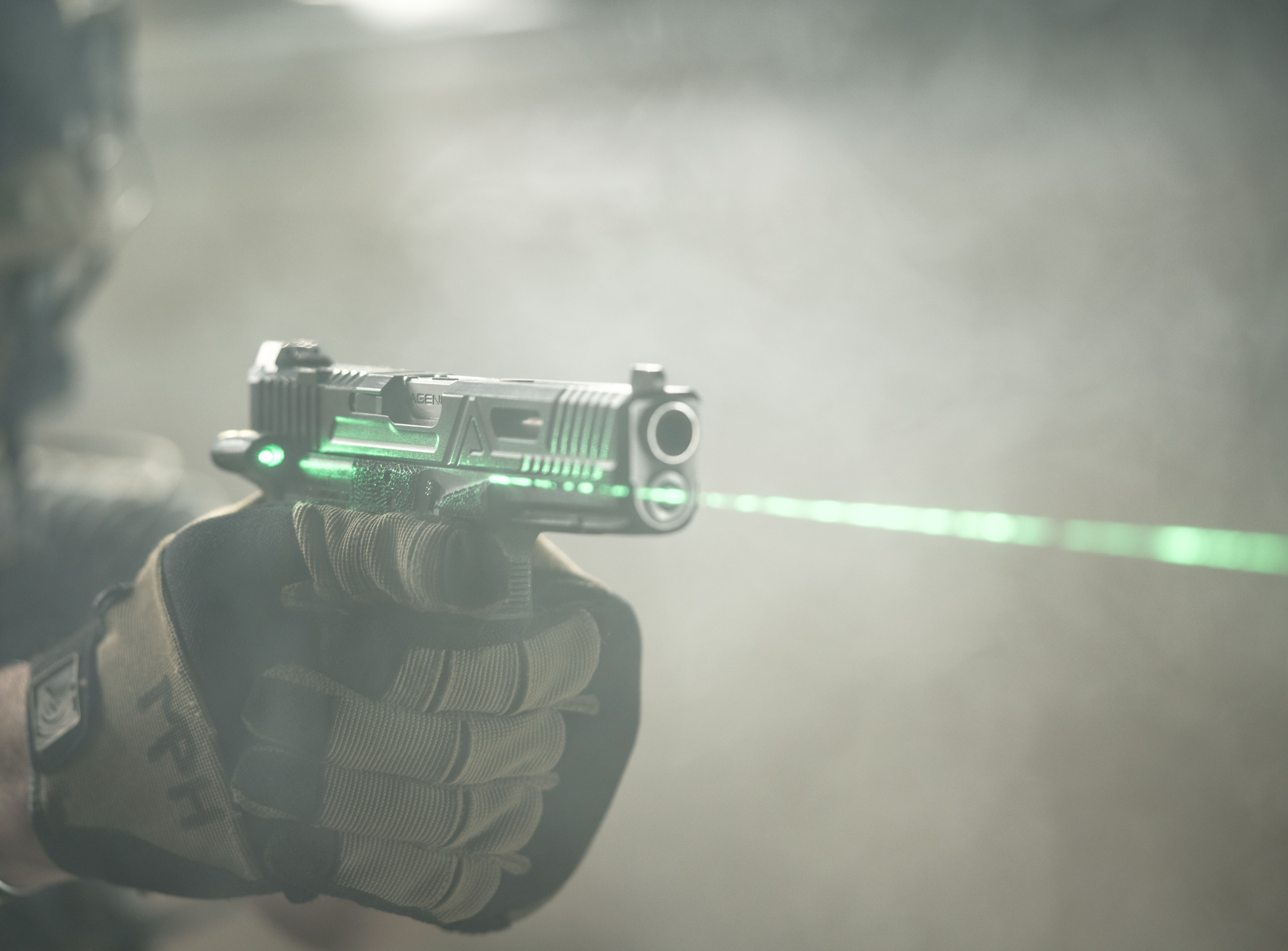 1. A Higher electric current is required by green lasers

Electric currents are not something I’m well versed in. Now, my papaw could probably sit down and explain this, but I’d still be lost, and as a middle man, I won’t do you any good. In fact, he did, and yet it’s still a bit over my head. So, I won’t bore you with details about something I personally have no place explaining.

What I can say, however, is that green lasers require more power. Now, that power doesn’t actually translate into brightness. Which I would have personally thought without the small amount of knowledge I’ve gained over the years.

And all that power requires energy, more specifically, electric current, and that current depletes battery life. Because a green laser requires more, it will drain your battery quicker than a red laser (because red uses less).

Green Sensitivity on the Wavelength Spectrum

2. Green is at the center of relative sensitivity/wavelength spectrum

The truth is, we only perceive green to be a brighter color than red. But what’s really happening is, our eyes are just better at seeing the color green. And because of this, seeing a green laser in sunlight is easier than seeing a red laser in that same environment. And in turn, our brain tells us green is brighter than red.

Really, humans are just interesting creatures, and how our bodies behave still needs a lot more studying. One interesting thing is how our eyes work, how we see and understand color, objects, depth, etc.

And one of those “interesting” features, particularly as it involves the eyes, is that we don’t see all colors equally. And if you sit around and think about it for a while, that makes a lot of sense (at least to me, it does).

Some people are color blind or color deficient. Some dogs can’t see color. Some people can’t see. It all has to do with the brain, but that’s a different article REFT won’t be covering.

What we are covering, though, is that the eyes see green differently than they see red. 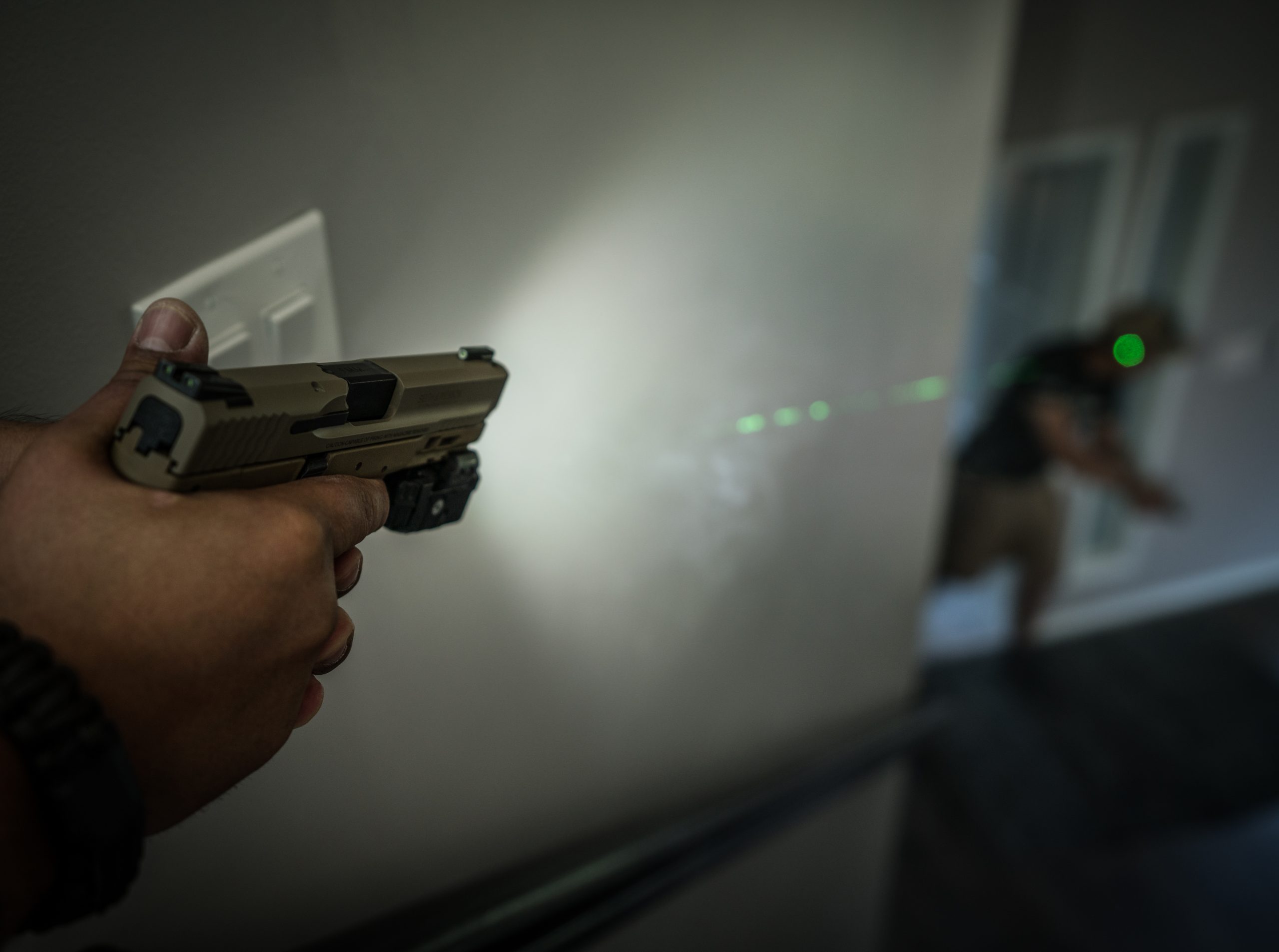 Your Laser is NOT a Flashlight

Since we’re talking about the perception of brightness, let me also cover this. You shouldn’t be using a laser to help you identify your target.

And if you’re practicing the gun-safety skills you should be, you should know what your target is, not shoot at anything you don’t intend to shoot, know what’s behind your target, and the likes. If you decide to be like the movies, using a laser to identify your target goes against all of that.

First, you can’t really see your target. Is that Bob? I don’t know; let me shine this laser at him to find out! No! Don’t do that. You’ve just endangered poor Bob, who was locking up for the night.

Second, if it wasn’t Bob, that laser isn’t bright enough to quickly identify the suspect. And that suspect probably isn’t worried about shooting the “right” person. Now you’ve given him (or her) a target. They don’t care if you’re Sally from register 3 or Jim, who ran in for a last-minute diaper-run. You’ve gotten in their way, and now you’re getting shot. Because bad guys (or gals) aren’t thinking morals, they’re thinking about getting their own task done. And if you’re in the way, you won’t be for long. Basically, you’ve put yourself at an unnecessary disadvantage.

Your laser is to help you get on target, not see your target.

Take Away: Don’t use your laser to sweep, search for, or identify your target. It only works in the movies. Use Laser Discipline!

Okay, so green lasers aren’t invisible. If they were, then I suppose the color wouldn’t matter so much. But it’s this “start” that makes them more advanced because it takes more work to get to the green laser you can see.

Those diodes used to produce a green laser is a bit more complex, and the complexity means more time-consuming and more manufacturing needs  (maybe explains the price of some green laser manufacturers). 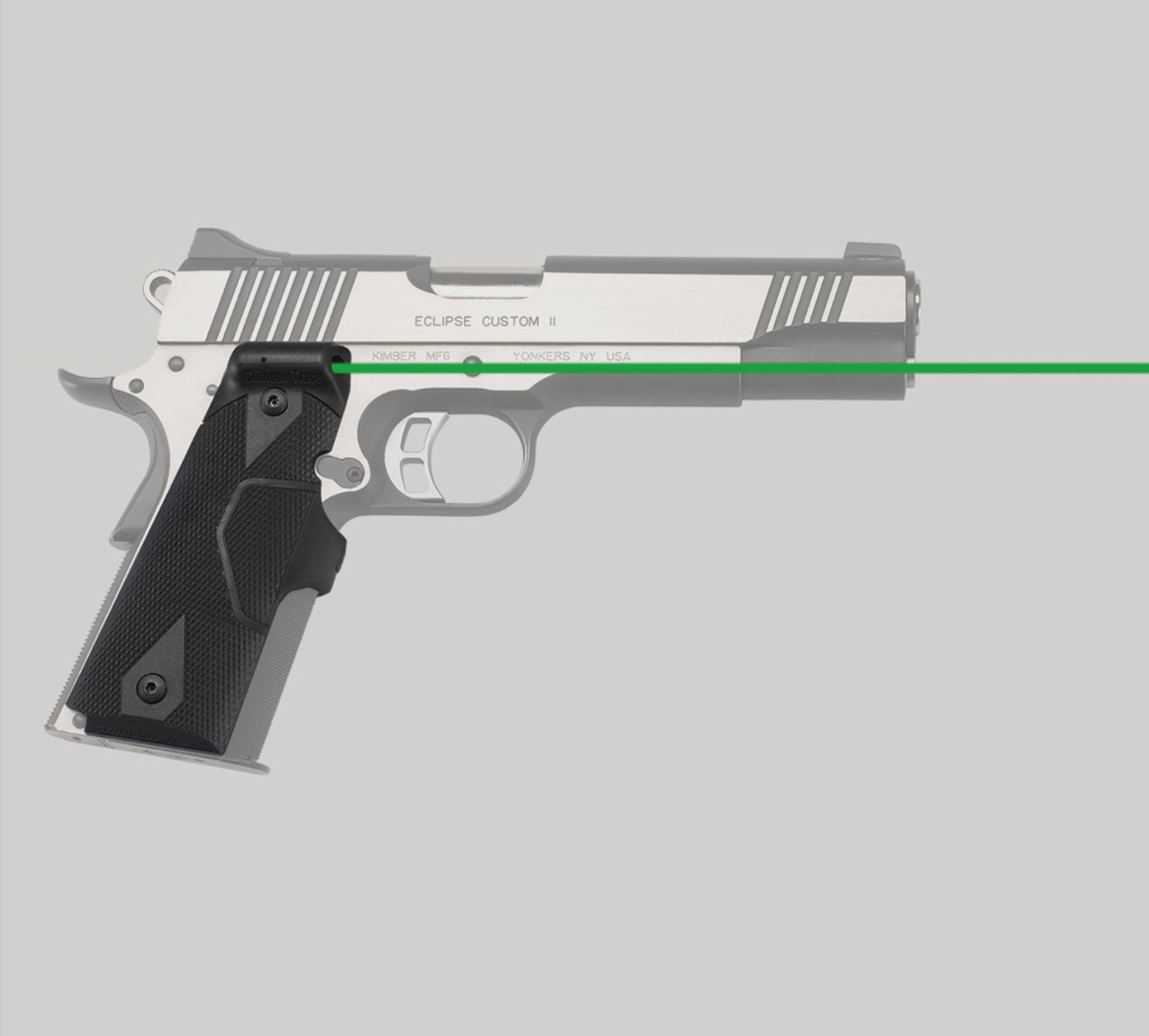 Steps to Creating a Green Laser

In the end, you have a wavelength that lets you actually see the laser. It takes three steps, not just one. And those steps translate into more space and more energy before you can get the final product. Of course, those three steps involve a lot more than what I listed above, but that’s a bit more complex than you probably care to read, and I won’t be getting into that here, mostly because I’m not qualified to. However, I can point you to those claiming to be experts in the field.

If you’re looking at getting a laser for your firearm, Crimson Trace offers both green and red lasers, and if you’re really interested, they can better clarify the inner working of a laser than I can. But if you have no interest in how a laser works, you just want one, here are a few options listed below. Did we miss anything? Do you have further recommendations or advice? Please, comment below. We love hearing from our readers!

Are you looking for more content? Check out some of our other stuff!

7 Laser Sights you can Buy on Amazon