Since the announcement of SIG SAUER’s victory in the Next Generation Squad Weapon program, the U.S. Army said America’s future adversaries were a major contributing factor in choosing the 6.8×51 SIG cartridge. Before we get into the weeds of the cartridge itself, you need to understand the why behind it. The Army was not requesting a new cartridge design, just to do something new.

There is actually some sound reasoning behind their decision and that reasoning has to do with our near-peer adversaries.

During an Army Press Briefing on the Next Generation Squad Weapon, Brigadier General Larry Q. Burris, the Army’s Soldier Lethality Cross-Functional Team Director, said their goal was to achieve a "clear, decisive, and sustainable overmatch against our near-peer adversaries."

The reasoning for the new 6.8×51 cartridge is a result of an analysis of what our near-peer adversaries are using, so let’s quickly unpack that to give you a better understanding of the why.

What Are The Russian and Chinese Military Using?

Russia hasn’t made any significant changes to its military small arms since 1974. Consequently, its 5.45x39mm round doesn’t have any advantages over the 5.56. The 5.45×39 cartridge was Russia’s attempt to follow what other militaries were doing, and produce a similar outcome with only minor changes. It really did nothing to improve their small arms capability. 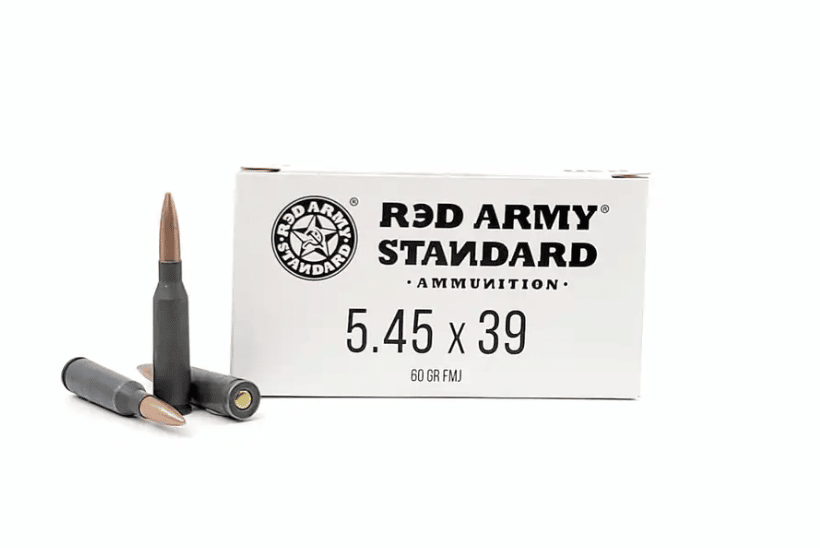 Moving to the new 6.8×51 round will put the U.S. military significantly ahead of Russian small arms in terms of effective range, energy on target, and overall lethality. Russia doesn’t have the money, especially now with the newly imposed sanctions, for a major upgrade to its military small arms program.

Additionally,  they don’t have robust private sector arms companies to lean on the way the U.S. Army does, so we’re not expecting any significant changes to their small arms any time soon.

China moved from the common 7.62x39mm round to its own proprietary 5.8x42mm round, which has a slight edge over the 5.56 round the U.S. Military is using. They have also been migrating from a bullpup design rifle to the QBZ-191 Assault Rifle. The ballistics of this new proprietary round combined with the newer rifle give China an advantage when compared to the 5.56 round.

The Chinese QBZ-191 Assault Rifle shoots a heavier bullet at greater energy than the 55-grain M193 ammunition. However, the hotter 62-grain M855 rounds close the gap and are probably of similar performance. Moving away from 5.56 to 6.8×51 is a complete game-changer. With bullet weights almost double and velocities a little better than the Chinese rounds, there’s no question about who will have battlefield superiority.

Although the 6.8×51 SIG cartridge is for the military, the civilian equivalent is the 277 SIG Fury.

A bold move like this isn’t typically met with simple acceptance. SIG SAUER unveiled the new 277 SIG Fury cartridge in late 2019, but it didn’t receive SAAMI approval until November 2020.

The new NGSW weapon systems are chambered to shoot the new 6.8×51 SIG hybrid ammunition. Being loaded at higher pressures results in increased velocity and terminal performance.

The 277 SIG Fury and the military 6.8×51 SIG features a conventional brass upper case body with a steel alloy bottom, and case-head section. Hence the name, hybrid ammunition, the hybrid design allows the ammo to run at significantly higher pressures than conventional ammunition.

"Using patent-pending technology the SIG Sauer Ammunition Division has engineered a completely new cartridge resulting in a more compact round, with increased velocity and accuracy, while delivering a substantial reduction in the weight of the ammunition….

The SIG Sauer Lightweight Belt-Fed Machine Gun (NGSW-AR) doubles the effective range and is 40% lighter than the current M249 while maintaining the preferred belt-fed operation, with reduced felt recoil to increase accuracy. The SIG SAUER Rifle (NGSW-R) is built on the foundation of the battle tested MCX platform with the added firepower of the 6.8×51 round." – SIG SAUER

80,000 PSI is the key to getting high velocities from a short barrel. This new cartridge is not using standard powders either. These loads are new proprietary powder blends SIG has developed while developing this round for the military.

SIG Sauer claims that the 277 SIG Fury cartridge has performance superior to the 6.5mm Creedmoor, exhibiting 6 to 9 feet less bullet drop at 1,000 yards, all while delivering 20–25% greater energy on target.

One benefit of the SIG hybrid case technology is that the case is 20 percent lighter for a loaded cartridge than a standard brass-cased cartridge.

According to SIG Sauer, the 277 SIG Fury maintains "decreased failure rates in the most vulnerable element of the case" through its "commercialization of ‘Military Technology,’".

Although many are comparing this new round to the 6.5 Creedmoor, they are very similar. I want to look at how it compares to the tried and true 5.56 that has been in use for a long time with our military.

The 55-grain M193 bullet, which is operating in the 55,000 psi range, the 55-grain bullet is going to do a little over 3,200 feet per second out of a 20" barrel with muzzle energy of roughly 1,251 foot-pounds. Obviously, the shorter the barrel length, the less velocity you’ll have, which results in less lethality at range.

Now if you look at the velocity and energy of the 5.56, the new 6.8×51 round is moving at almost the same velocity, but its payload is more than double (55-grain vs 140-grain). Add to that a significantly greater muzzle energy (1,251 ft pounds vs 2,798 ft pounds) and very slippery ballistic coefficient and you have an extremely lethal cartridge at greater distances.

The argument now becomes availability and price. I can already tell you that it’s going to be a more expensive round because of the unique 3-piece case design, not including the bullet. Yes, 5.56 is widely available and for the most part affordable compared to this new round. But I will say that this new round by SIG was created out of the U.S. Army requirements for the NGSW program; not for civilians.

There is no reason to be butt hurt over this new round. It’s for our military to have another edge over our near-peer adversaries. If you want to play with the new round then you’re going to pay for the 277 SIG Fury. But for most of us civilian patriots, the 5.56 is going to do just fine.

Who Is Fulfilling These Orders For The New 6.8×51 SIG Ammo

Colin Winchester LLC, the largest manufacturer of small arms ammunition for the U.S. military, announced that the U.S. Army has awarded the company a $15 million cost-plus contract for the design of the Next Generation Squad Weapon (NGSW) ammunition manufacturing facility.

"Winchester is honored to have been awarded this NGSW ammunition manufacturing facility design project at the Lake City Army Ammunition Plant," said Brett Flaugher, President of Winchester. "The ultimate design will incorporate best practices, key learnings, and stakeholder input to create a state-of-the-art production facility that delivers the U.S. Army an optimal manufacturing solution for NGSW ammunition. The NGSW ammunition produced at Lake City’s new facility will equip the American Warfighter for success on the battlefield for generations to come, helping to ensure the nation’s security and defense."

Now I know it sounds like we’re harping on the 5.56 round because there is a new girl in town, but keep in mind that since the 1960s the US and NATO have been using 5.56 with outstanding success.

The 5.56 round performs great out to roughly 300 yards regarding terminal ballistics. They do not suit the cartridge for barrier penetration or shooting past 300 yards. When the 5.56 cartridge was developed and the type of warfare the United States was involved in, namely the Vietnam War, the cartridge made sense. It well suited them for fighting in the confines of a dense jungle environment.

Fast forward to the GWOT and the round still performed relatively well in the urban environment, but where it showed its weakness was outside of those urban areas where you are taking shots out past 300 yards.

As warfare evolves so should the weapons and ammunition. With the battlefield developing and our near-peer adversaries becoming more of a threat, the Army decided it was time to make the move to not only a new weapons system but a superior round that outperforms anything else out there.