What Are All The Different 22 Calibers? Why Choose The .22 WMR?

A lot is going on with the .22 caliber round, and today we’re going to cover it. If you’ve ever asked yourself any of the following questions, you’ve come to the right place.

Before I get too deep into this article, let me first note that any of the ‘finer details’ listed below are estimated averages for .22 ballistics. The weights are not specific to any one manufacturer. This is simply an educational piece, and I hope you leave here with a good comparison.

How much do you actually know about our good friend, rimfire .22? Did you know it’s been a part of American history for over 150 years? What about the fact that it’s America’s oldest commercial self-contained metallic cartridge? Do you know the first .22 long was produced for revolvers? Or, that in 1887, when J. Stevens Arms & Tool Company developed this caliber, the Peters Cartridge Company would be the first to manufacture the long rifle for Stevens. Keep reading for some more history on the .22 caliber.

First developed for the Smith & Wesson Revolver in 1857, the .22 short for hunting small game is pretty popular, especially if you’re hunting rabbits and squirrels.

Originally produced as a self-defense caliber

Not near as common as .22 Short or .22 Long Rifle, there’s the .22 Long. The LR has definitely surpassed this caliber as it’s a slower, lighter, and shorter bullet. And it’s less accurate than the .22 LR, and the .22 short.

The .22 Long is the second oldest rimfire cartridge

As already stated, the .22 LR caliber was developed in 1887. It has since become one of the most popular rimfire cartridges. And because of its low noise and minimal recoil, the round became really popular for shooting small-game and for sport.

The .22 LR is by far the most popular .22 caliber bullet across the country with many applications. I use my Ruger 10/22 for rodent control, squirrel hunting, plinking, and teaching my daughter how to shoot a rifle. With so many uses for a lighter caliber, the .22 LR isn’t going anywhere anytime soon.

In 1959, the .22 Winchester introduced Mag to us — one should conclude this is how the W in WMR got its name. What you shouldn’t conclude is that Winchester was actually using this cartridge. Why? Because they weren’t. It wasn’t until the following year when Winchester would introduce the Model 61 pump-action rifle that they would use their own creation, the .22 WMR.

So, if Winchester wasn’t the first to chamber their own round, who was Marlin Levermatic? The very first .22 I shot was a .22 LR with the word subsonic printed on the front of the ammo box. With that, I figured it would be a good idea to talk about what this means. While this article applies specifically to the .22 caliber, you will hear this term about other calibers, too.

Subsonic rounds serve the purpose of eliminating noise after the bullet is flying (supersonic, not so much.) This is not the noise associated with suppressors. Suppressors reduce noise by about 30 dB, but not all noise. As a former turret gunner in OIF, I could always tell how close bullets were to me, based on how they sounded. If a bullet made a “ping" sound and I couldn’t locate any sign of fire, I knew it was not a threat to me.

However, I knew when a bullet would make the sharp “snapping" sound of what we call a sonic boom, I was in imminent danger. A sonic boom or crack is a noise your bullet makes as it’s traveling through the air toward your target. The same works in reverse because you’ll only hear the sonic boom on the receiving end of 7.62x39mm bullets.

What is a Sonic Boom?

What exactly is happening when your bullet travels through the air? Or a better question: why does it make a sound? It doesn’t really make sense — or does it?

When your bullet travels, once it leaves the muzzle, the air creates 2 pressure waves. The first pressure wave is at the tip, and the second is at the bullet’s base. 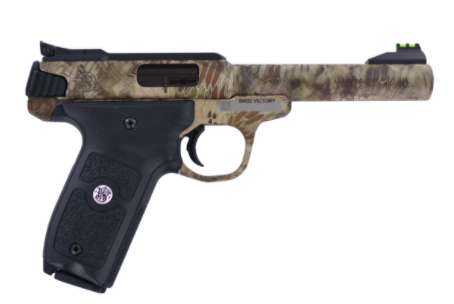 What is the Speed of Sound?

It’s important to know how atmospheric conditions affect the speed of sound because you want to have ammunition with a lower velocity, 1,000-1,100 fps; this way, the ammo you have will actually stay subsonic.

When those pressure waves combine, something known as a shock wave happens, which produces the sound. A big trend we’ve seen in last past 3 years is the desire for subsonic ammunition in lower calibers like the .22 LR and .22 WMR. $402.99
at Guns.com
VIEW DETAILS
Prices accurate at time of writing

Slower than the Speed of Sound vs. Breaking the Sound Barrier

To simplify things, if you see a box of ammo with the title "subsonic" on it, then it has a bullet that travels through the air, slower than the speed of sound; therefore, it’s quiet.

If your box of ammo has a label on it saying, "supersonic," then the bullet traveling through the air breaks the sound barrier. When you hear a "boom," that is the sound of the barrier being broken.

While subsonic ammunition is great because it’s loaded so as not to break the sound barrier, meaning no sonic boom, that doesn’t mean it doesn’t come with a few limitations related to velocity and energy. Depending on many factors, such as weight, bullet tip, case material, etc., bullet velocities can vary. I used the average bullet speeds based on the current load data by the Hornady Reloading Data Center and the SAAMI Specs.

Subsonic loads have a lower maximum effective range because of their low velocity. That means your round is susceptible to the elements, such as wind drift, that can hinder trajectory.

Someone much smarter than I calculated the average .22 LR energy to be 100 ft. per lbs, which is double the energy of a .22 short, having an average of 50 ft. per lbs.

Low velocity can cause a round not to gain enough speed to create the energy needed to expand (some manufacturers have won this battle). If you have a low velocity round, like those common with subsonic .22 ammunition, the stopping power becomes diminished — probably why people aren’t shooting large game with a .22.

Many subsonic ammo manufacturers will load the bullet heavy for the caliber to compensate for low velocity and allow for further penetration of the target.

Supersonic ammunition breaks the sound barrier. This means you hear the sonic boom because the bullet passes through the barrier, creating a crack or booming sound as it travels through the air.

Because supersonic ammo has higher velocity and energy levels, it’s a better option for long-range over subsonic ammo. Unfortunately, though, it doesn’t give you the noise reduction available for subsonic rounds. 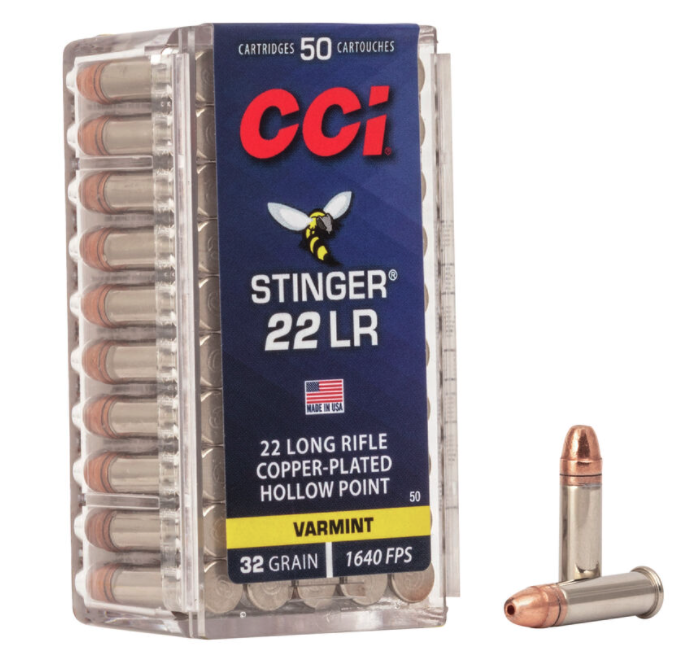 Suppressors vs. Subsonic and Supersonic

When you fire your weapon, there are two sounds. The sound diminished by using a subsonic round is the one I’ve been referring to as the sonic boom or what happens when the bullet breaks the sound barrier. However, subsonic rounds don’t eliminate all noise. For that, you’ll need a suppressor. A suppressor works to suppress the sound created from pressurized gases within the chamber, exiting the barrel through the muzzle to a sudden change in temperature and pressure.

If you want to decrease gun blast and sonic boom, shoot subsonic ammo through a suppressed firearm.

While bullet diameter was the same, the case of a .22 LR is shorter than the .22 Mag case.  The .22 WMR not only has a longer case, but the overall length is 0.350" longer than the more popular .22 LR. The biggest differences in performance between the 2 bullets are in bullet velocity and stopping power.

There is no argument the .22 WMR is more powerful and more punishing than the .22LR. Reliability and accuracy issues have been concerns with .22 WMR pistols because most of us already know how reliable our .22 rifles are. Everyone I know owns a .22 LR chambered pistol or handgun because it’s practical, doesn’t require hearing protection, and is perfect for training, varmint hunting, and plinking.

A .22 Magnum is louder than .22 LR, but it doesn’t have a substantially larger felt recoil. In fact, the Kel-Tec PMR 30 feels like I’m shooting a louder version of a Glock 44.

Would I carry a .22 caliber for self-defense?

I’d never use a .22 LR as a self-defense gun because it lacks serious stopping power and velocity. However, a .22 WMR can approach within 50 Ft-lbf of the 9mm in energy. This gives us the opportunity to use a .22 WMR, like the Kel Tec PMR 30, as a self-defense gun for your family. With a standard 30-round capacity, I’d trust that any intruder on the other end will not continue their aggression.

No! I get the bullet diameters are almost identical and that we can switch the chambers in revolvers out, but the .22 LR case is too small for the .22 WMR chamber.  The .22 WMR bullet sits down inside the case to have more control over the projectile at much faster rates than the .22LR. You can/will either destroy the gun barrel and/or injured your hand, face, or other bystanders. 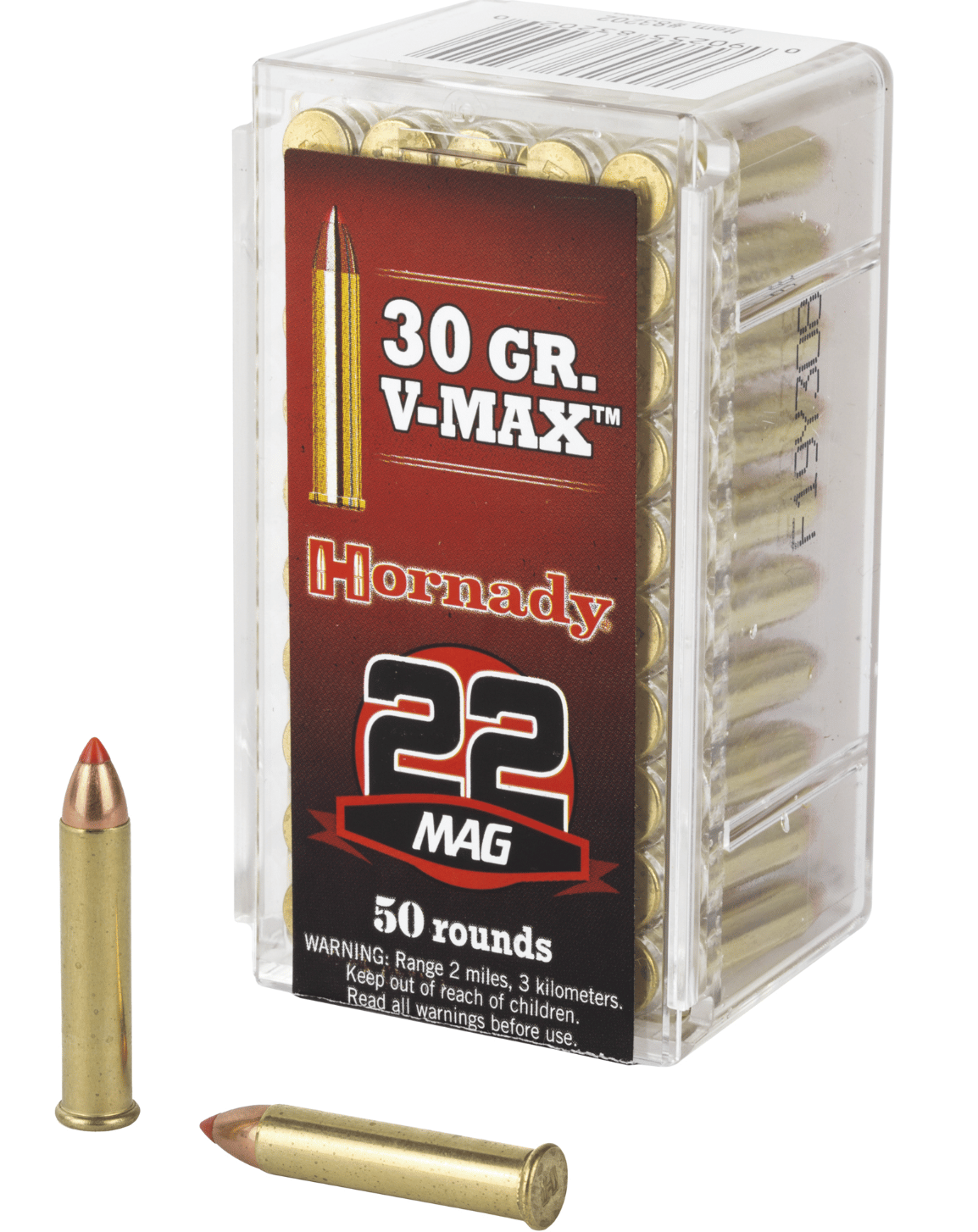 What is the Best .22WMR Pistol?

There are a few pistols chambered in the .22 WMR because it’s not as sought after as the .22 LR and the 9mm Luger. However, there are 2 pistols that I would consider buying if I were looking for a .22 WMR pistol. First, the Kel-Tec PMR 30, second, the Rock Island Armory XT 22 Mag Target Pistol.

Before I make my decision on a gun vs the other, I always look at the mag capacity, weight, height, price, and performance. As I hold the Kel-Tec and RIA .22 WMR, the PMR30 is much lighter and almost feels like an airsoft gun. before I shot the Kel-Tec, I was worried about the recoil of a gun that barely touches 1 lb with a full magazine. The near-zero felt recoil of Kel-Tec PMR 30 is impressive and only adds to the fun of shooting 30 rounds with no recoil.

The RIA XT 22 Mag Target Pistol feels more like a 9mm than the Kel-Tec model with a 2.5 lbs weight (unloaded), and a 5" barrel to match most modern full-frame 9mm pistols. The G10 grips on the RIA XT are a gracious nod to the American icon, 1911.

The adjustable trigger feels fantastic, but still not as smooth as the Kel-Tec 5 lbs trigger pull. Another solid feature is the extended beavertail design to help keep your hand safe from slide-bite. I like the fact that it gives me an opportunity for a higher grip angle for more control. The Kel-Tec PMR-30 is less than half the weight of the RIA XT with a lighter trigger pull and more features. For example, the Kel-Tec .22 WMR is optic-ready with an under-barrel Picatinny rail for an easy attachment of a laser or light combo. The ability to add optics, lights, lasers, and after-market night sights, makes the Kel-Tec a more versatile and unique offering in the .22 WMR caliber.

When I’m buying a .22 caliber gun, I’m looking for high-capacity magazines that I can plink on the range with and have a good time. Kel-Tec wins the magazine debate without question, with the magazine capacity that most rifles look for.

Depending on where you look, I’ve seen the Kel-Tec PMR 30 for as little as $460.00, whereas the RIA XT Target Pistol is harder to find and $529.99. The PMR 30 has a clear advantage in price point as well. Both pistols are a lot of fun, but I don’t think the slight accuracy advantage with the RIA XT is worth the difference in price. 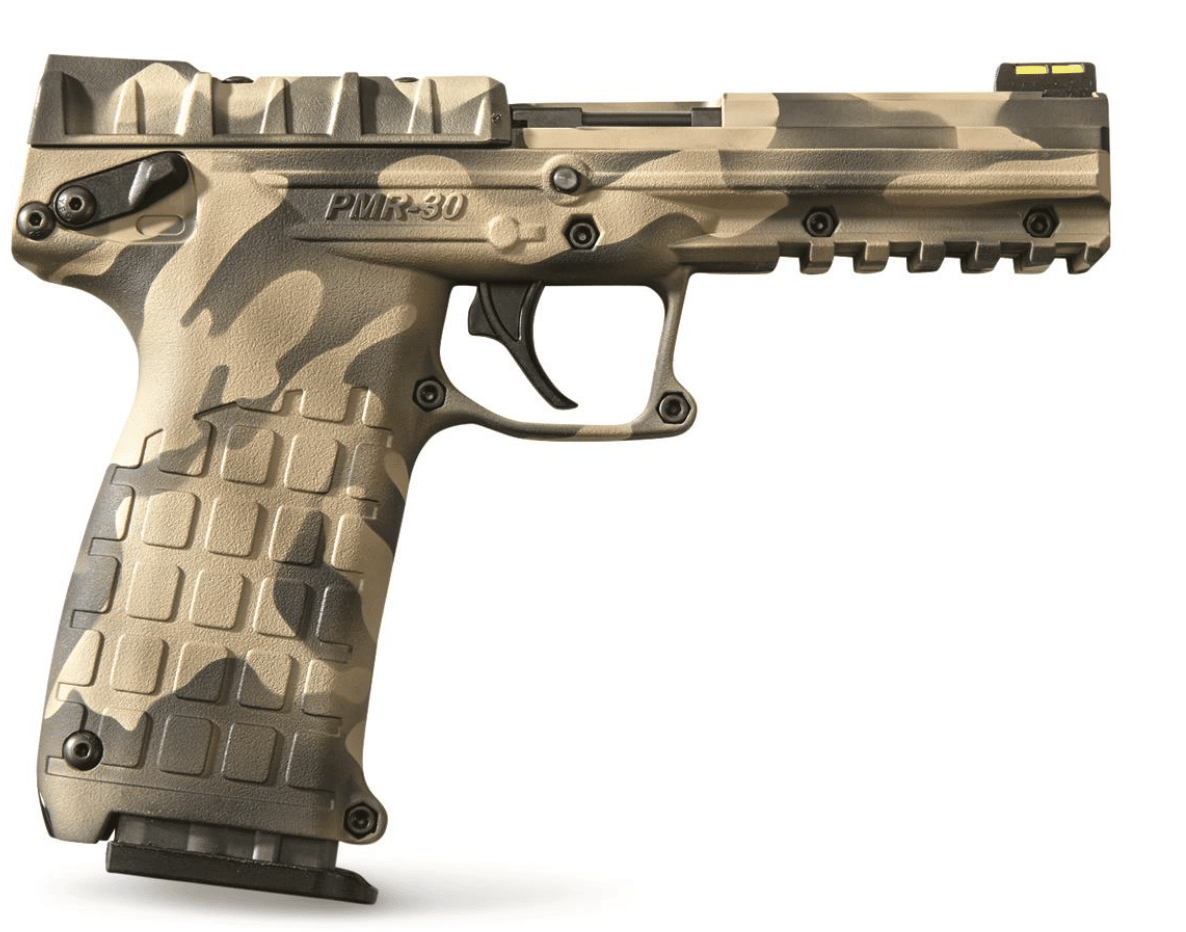 Where Can I Buy The Rock Island XT 22 Magnum? 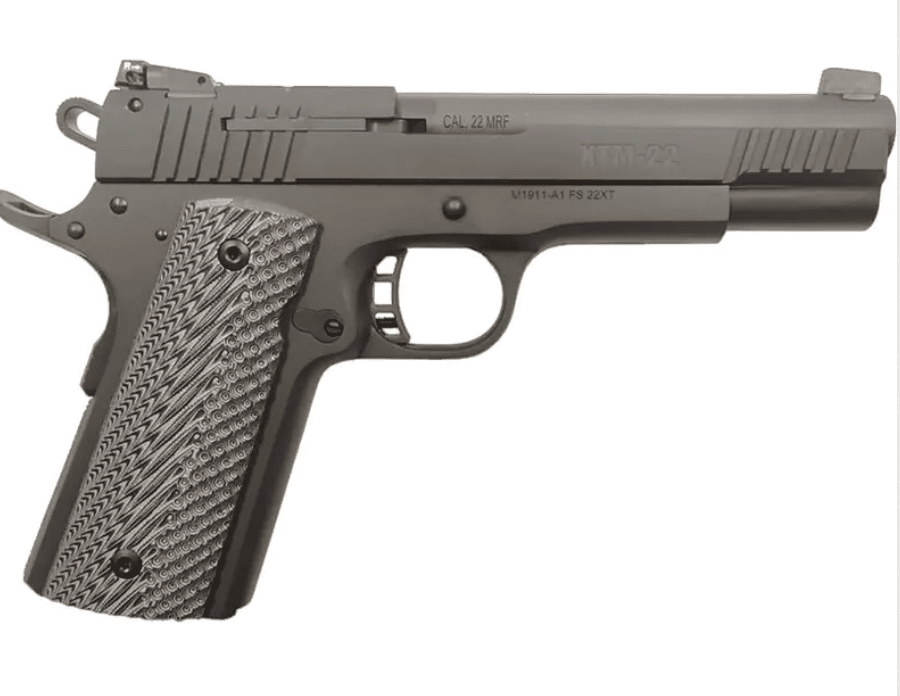 $588.99
at Guns.com
VIEW DETAILS
Prices accurate at time of writing