What is The Best Pistol Light & Laser Combo?

Since I’ve started writing a couple of years ago, I’ve learned a lot about guns, gear, and weapon attachments, even more than I learned in the military.

One reason is we were given equipment and told to use it, but never really given a choice on what we like best.

In turn, I never really cared about learning more about new companies because I knew I’d never get the top gear or tools. As a civilian, it’s become a slight obsession to find the best tools for my weapons to ensure that I give myself the best opportunity to win in a fight if need be.

One of those tools is a laser and light attachment underneath my pistol. $350.79
at Amazon
VIEW DETAILS
Prices accurate at time of writing

I’ve owned my Glock 19 for about 5 years now and I wish I knew about Crimson Trace 2 years ago. My hope with this article is for our readers will get to read this blog before they buy a gun because it will make everyone a better, more efficient shooter.

What is a Class 3 Laser?

When companies talk about the class of laser or light they have, they rarely explain what those classes mean. It becomes near impossible for consumers to know which class of light is best for them if they don’t know what the different class designations mean. For the most part, the high-end lasers on the market use a Class 3R under the Center for Devices and Radiological Health (CDRH).

As weird as it sounds, the CDRH falls under the umbrella of the Food & Drug Administration (FDA). They have broken the intensity of a commercial laser down into different classes that you can read in the CDRH attachment. $182.47
at Amazon
VIEW DETAILS
Prices accurate at time of writing

A Class 3R laser is described as a laser that has a continuous wave of light and comes with a low-risk designation if someone were to spot you in the face or eyes. Obviously, if you point this at a person’s eyes, you can cause permanent damage to their vision. However, it’s still considered a low-risk wave of laser that works perfectly for gun applications.

A Class 3R is about 5x the emission of Class 1 and 2 laser and produces no more than 5mW of intensity. The reason Class 3R is used in most gun laser attachments is it provides enough light to reach a target at 25 yards.

Why Would I Use a Laser attachment?

With the way marketing is today, many gun owners look for laser sights, but don’t really know why they’re trying to buy one. There are a couple of reasons why you should buy a laser sight for your pistol.

First, a laser attachment is going to give you the ability to hip-fire your pistol without worrying about aiming down the sights. As every soldier or police officer will tell you, timing is everything. That split-second that it takes to aim down the sights is eliminated by simply putting the laser on your target and pulling the trigger.

When it comes to installing a light or laser, why not just do both with one tool? When I think of Crimson Trace, I immediately think of their lasers and light attachments because that’s how they earned their reputation. I believe if there is a laser and light combination to buy, it’s the CMR-205 Rail Master Pro Universal Red Laser and Tactical Light. For starters, it will fit and work perfectly with any pistol, rifle, or shotgun that has a weaver or Picatinny rail system attached.

The red laser is incredibly bright and solid and rated as a class 3R, which has a beam intensity of 5MW. I’ve seen many laser attachments and my biggest gripe for most of them is the laser isn’t as bright or solid as I’d like. For example, if I pull up my pistol and hit my laser, I want that beam to be clear and not fade as the distance grows. If the laser is fading, then your accuracy will fade as well.

I use this tool with the laser with the light dazzler because if you’re looking at me head-on, it’s very disorienting with the strobe-type light in your eyes. I also like to use both the light and laser on because it’s blinding to see from close range and your assailant will not be able to get a good sight picture of you at all. By the time their eyes adjust, your laser is already on target and the fight is over before it started. $299.99
at Amazon
VIEW DETAILS
Prices accurate at time of writing

How Long Does the Laser & Light Last?

The laser and light combo will last up to 2 hours of constant use on a 1 CR2 Lithium battery. If you’re anything like me, you forget to turn things off sometimes, whether it’s a light in your home or a button on your pistol. Crimson Trace ensures you won’t kill your battery every time you go to the range by incorporating an auto-off button after 5 minutes. To turn off the Rail Master Pro, all you have to do is tap the side of the attachment in the same way you turned it on. It’s a really cool feature that will save you time, money, and maybe even your life one day.

Obviously the less you use both the laser and light at the same time, the longer the battery will last for you. I know that I could probably get about 10,000 rounds if I just used one or the other at my normal range sessions. Practice is vital to your success because you must zero in your attachment before you take it out on your CCW in the real world. The laser beam is about 0.50" at 50 feet to give you a clear sight picture of exactly where the laser is in relation to your target.

How Universal is the Crimson Trace Rail Master Pro?

I’ve attached a table of all the pistols that for sure support the Rail Master Pro from Crimson Trace. This is one of the biggest reasons there are no other products on the market today that can come close to offering the quality of what Crimson Trace offers in this product. 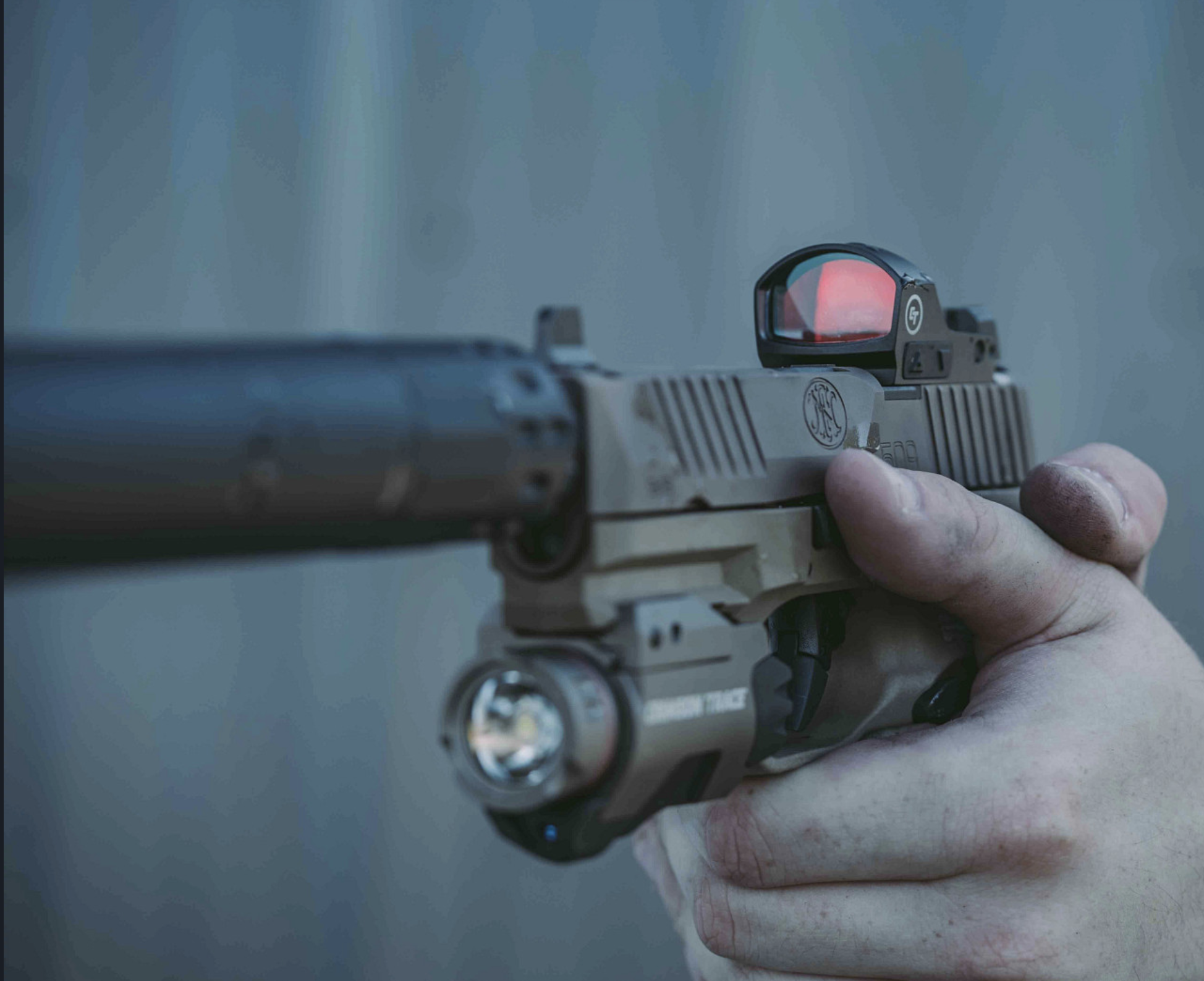 $249.95
at Amazon
VIEW DETAILS
Prices accurate at time of writing

The biggest thing to consider when making these adjustments is that it takes very little movement to impact your accuracy. For example, Even shooting in Colorado or Wyoming, you don’t need to turn the dials more than half a turn to get your beam on target.

Why Should I Buy the Crimson Trace Rail Master Pro?

When considering a light and laser combo, the first thing you need to consider is how much-added weight is going to be on your pistol. If you carry a CCW and it’s a lightweight gun, the last thing you want to do is weigh it down with a weapon attachment.

Crimson Trace is somehow able to add all that technology into a package that weighs only 4 ounces! It’s just light enough to not force your barrel down as you grip your pistol for a shot.

The Class 3R laser is bright enough to clearly reach a target up to 50 feet (16.67 yards) without any distortion. You most likely will never want to engage a threat at much more than that anyway, especially with hip fire. The 4 options to choose from offer great versatility and customization to figure out what works best for you and what doesn’t. With 2 hours of continuous light and laser beam, it offers you more than enough time to engage a threat. $70.20
at Amazon
VIEW DETAILS
Prices accurate at time of writing

The ability to turn on/off your Rail Master Pro with a simple touch on the side of the tool allows you to immediately acquire your target and engage any threat faster than anyone will be able to aim through iron sights.

The best part is that you never have to release your grip from the pistol to turn it on and off because you use your off-hand thumb as you bring it up for reinforcement.