We’ve done many review blogs on shotguns (Mossberg 590, Mossberg 930, Mossberg Shockwave, and the Mossberg 835) and which ones we like the best, but we haven’t gone into specific purposes yet. This blog is dedicated to the shotguns that we view as the best for Close-Quarters-Combat (CQB) operations. If you’re not too familiar with CQB, think of being in tight places, such as a house, hallway, narrow alleyway, or a public office building with cubicles. Our Special Operations soldiers and elite law enforcement officers find themselves in these situations all the time. The 5 shotguns below provide these soldiers and LEOs with the capability to maneuver within tight spaces and maintain fire superiority in situations where space is severely limited.

The Mossberg Shockwave has taken the shotgun world by storm with its Raptor’s Bird Head pistol grip. The 590M Shockwave is made in collaboration with Shockwave Industries to provide Mossberg with a low-profile, shortened version of their 590 shotgun. The 590 Shockwave is built around a 15″ barrel versus the 18.5″ barrel for the standard Mossberg 590 Tactical. To make it more mobile, the Raptor’s Birds Eye stock is at least 8″ shorter than any of the 590 stocks and weighs 6.55 lbs instead of 6.75lbs. The Magfed shockwave almost doubles the loadout from 6 shells to 11 shells. The 590M Shockwave comes with the forend strap to ensure you maintain control with each shot and an optional wrist strap to hold the shotgun to your firing wrist for extra support.

Why Should I Buy The Mossberg 590M Shockwave?

The 590M Shockwave is built for CQB operations in tight quarters with 11 shells to fire before reloading and the shortest shotgun model on the market. Please be aware that the Mossberg Shockwave is controversial and may not be legal in your state. Mossberg was able to get the shotgun rated as a firearm instead of a Class 3/NFA Firearm, but each state has different laws and regulations. If your state allows this shotgun, it will be great for home-defense with its unmatched firepower and maneuverability. The Shockwave also looks incredible and will get the attention of anyone on the range due to its one-of-a-kind aesthetics.

Where Can I Buy the Mossberg 590M Shockwave?

Benelli has been known for over a decade as one of the premier shotgun manufacturers in the world because of the level of care and technology they incorporate into their guns. Starting with their patented Comfortech recoil-reduction system,  which is combined with the Combtech technology for a smooth and light recoil that you’ll barely feel. Benelli split the stock diagonally and placed the shock-absorbing chevrons throughout the stock to absorb almost all of the felt-recoil. The Combtech cheek pad is designed to eliminate the vibration and felt-recoil on your face. If this isn’t enough the M4 Tactical is built with the famous A.R.G.O. system, which is a short-stroke, dual-piston shotgun specifically designed for the United States Marine Corp.

Why Should I Buy The Benelli M4 Tactical Shotgun?

The A.R.G.O. system designed the gas port to be in front of the chamber because the gas is other and cleaner at the front of the chamber. This prevents the dirty carbon from sticking inside your chamber and barrel for a much more reliable shotgun. The Pistons are placed right against the bolt to prevent added vibration and faster operation for a faster and more accurate fire. The Benelli is the smoothest shotgun you’ll ever fire but comes at a price that is untenable for most Americans.

The Vinci SpeedBolt is a great piece of technology Benelli placed in its M4 Shotgun, which improves the balance, reduces the felt-recoil, muzzle climb, and weight. The bolt is made of tungsten steel, which is lighter than stainless steel and provides faster cycling of shells. Since the tungsten is lighter, it can handle lighter loads and assists with the overall reduction of felt-recoil. The SpeedBolt is designed for competition shooting with almost zero felt-recoil and muzzle climb, allowing you to shoot multiple targets in rapid succession. To Top off the shotgun is the QuadraFit buttstock. This buttstock is custom-fitted to every shotgun to allow for easy customization of the cast, comb height, length of pull, and drop.

Where Can I Buy The Benelli M4 Tactical Shotgun?

The Kel-Tec KSG is 3rd on the list because of the unique Bullpup design and simplistic features that make this shotgun easily customizable and dependable. The KSG is chambered for 3″ shells and loads them into 2 magazine tubes (yes, you read correctly). The 2 magazine tubes are revolutionary with a selector switch to load one tube from the other with unmatched speed versus competitors. The shells are all downward-ejecting and ambidextrous for a universal feel for every shooter in your team or family. The Bullpup design of the shotgun reduces the weight to 5 lbs and only 26″ long for easy use in CQB operations or home defense situations.

Why Should I Buy The Kel-Tec KSG?

Kel-Tec is one of the most unique shotguns in the world and provides a great opportunity to own something no one else has. The KSG has great versatility with the 2 mag tubes that can be switched with an ambidextrous lever. The KSG can hold up to 9 rounds and produce one of the fastest combat reloads of a pump-action shotgun. With a price of around $830, this is a great shotgun for home-defense or CQB operations by specialized operators (police or military).

Where Can I Buy The Kel-Tec KSG? 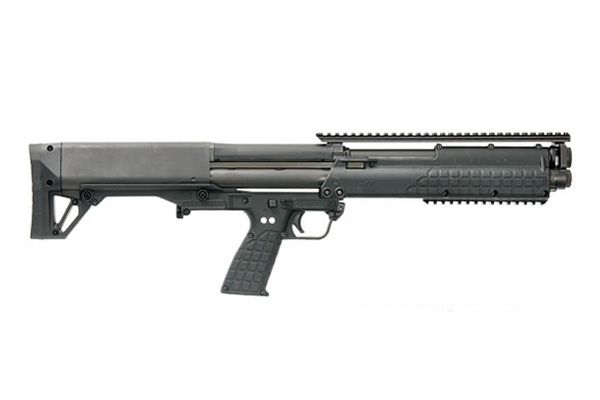 The Mossberg 590M Shotgun is probably my favorite shotgun on the list for putting rounds downrange in a hurry and maintaining my accuracy. I think the Benelli is incredible too, but the mag-fed 590 is incredibly accurate for and it’s about 60% cheaper than the Benelli M4. One amazing feature is the balance of the shotgun is based around the magazine well, so even if you’re carrying 20 rounds, the shotgun is balanced and comfortable. I love the ambidextrous safety, dual extractors, and the twin action bars, which prevent misdeeds and stoppages. Similar to most other Mossberg shotguns, the 590M is always reliable and dependable when you need it most. The addition of the magazine with a capacity of 5,10,15, or 20 shells is unheard of in a shotgun. I believe the $721 price tag is a steal and if you could get this shotgun at a place like Gun Broker (used), you’ll end up with a $700 shotgun for less than $500.

Why Should I Buy The Mossberg 590M?

The 590M is smooth and easy to shoot with an abnormally wide magazine (fits in most .308 pouches) because it’s the world’s 1st double-stack shotgun magazine. The 1st thing you’ll notice is this shotgun has almost no felt-recoil. My favorite feature in the 590M is the ability to change load-outs from birdshot, buckshot, or slugs to fit your purpose. Just ensure you mark your mags so you know what shell you’re shooting. The dual extractors from the Mossberg are designed to ensure you don’t get misdeeds due to a dirty environment, such as Iraq, Afghanistan, or Northern Africa.

Where Can I Buy the Mossberg 590M? 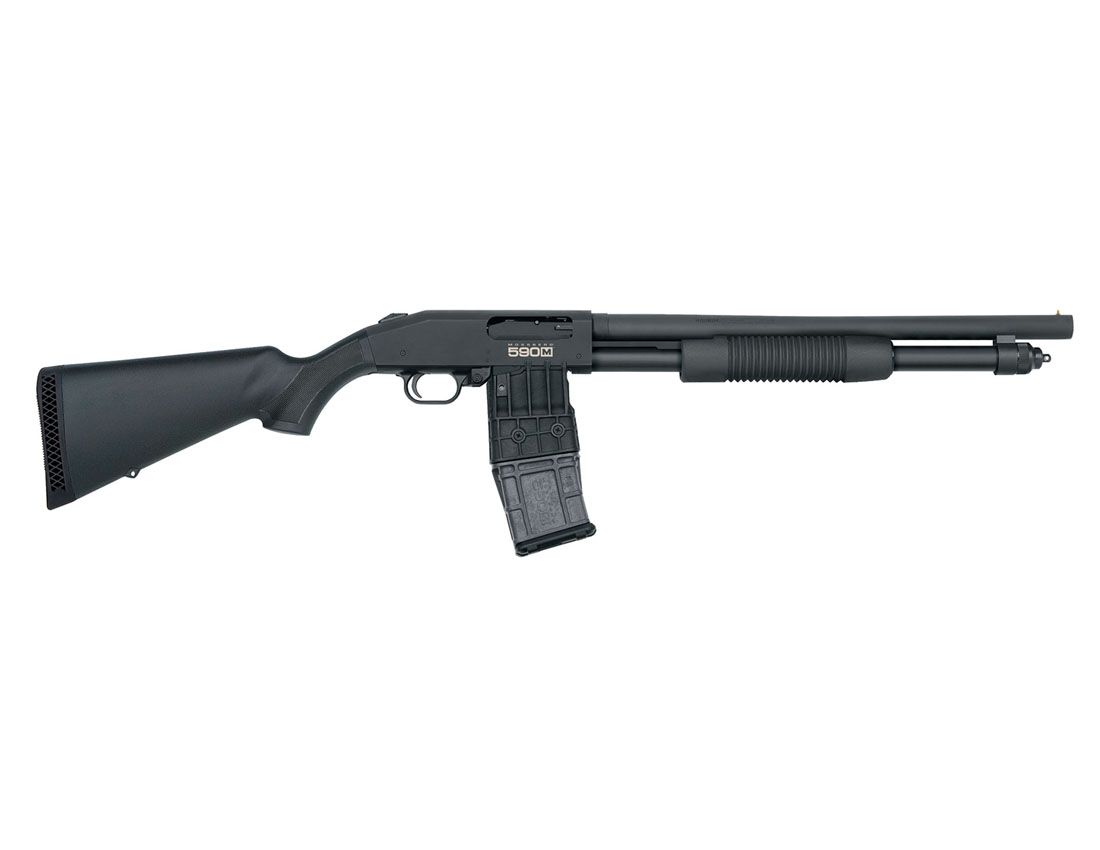 The Mossberg 930 Tactical SPX shotgun should probably be rated higher on list, but I’ve learned in my time in the military that not everyone can handle an autoloading shotgun. If you’re a soldier or SWAT team member, this shotgun is everything you’ll ever need in a CQB operation. However, the average civilian with minimal experience should work on their fundamentals with pump-action first. The ghost ring with white paint on the front sight sets up your target as clear as day (even during night operations). The only reason this shotgun isn’t number 1 on the list is the recoil is felt more in this shotgun than it is the 590M and the Shockwave 590M.

Why Should I Buy the Mossberg 930 Tactical 8-Shot SPX?

If you want an auto-loader shotgun, this is the model you need to get. I believe this is the best auto-loading shotgun manufactured on the market today. It’s built with the same features that ensure reliability, such as the dual extractors. I recommend this shotgun for skeet shooting, self-defense, and military operations for shooters with enough experience with a shotgun to handle the recoil.

Where Can I Buy the Mossberg 930 Tactical 8-Shot SPX?