The .22 LR bullet is measured at 5.56x15mm and is a rimfire cartridge to accommodate the lower muzzle velocity and power. Most people use the .22 Long Rifle (LR) bullet for target practice, training, and varmint hunting.

Most guns chambered for the .22 LR are going to be relatively cheaper than any other caliber and are the cheapest to own of any caliber gun. 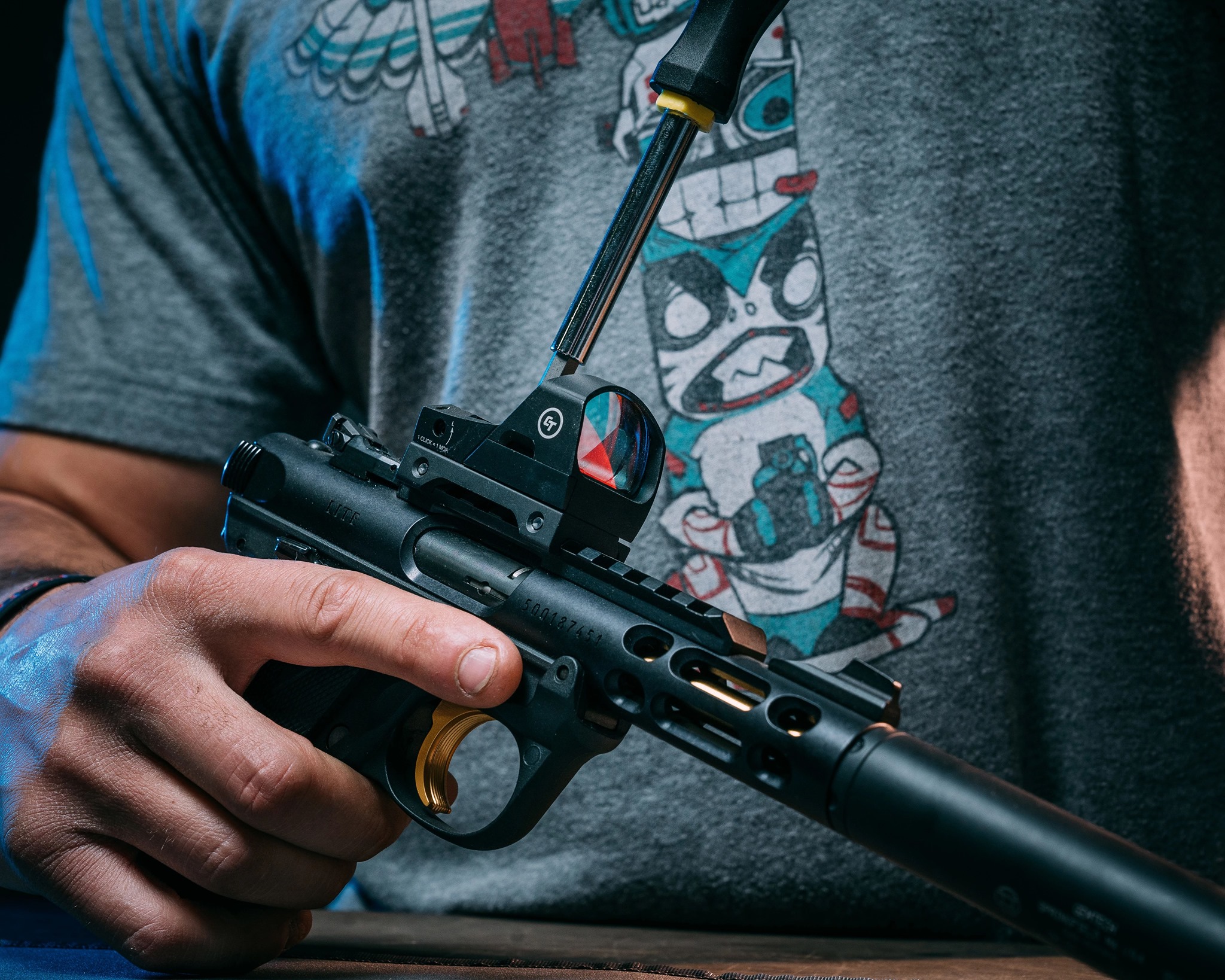 There are 5 pistols that I think everyone should at least shoot to see if a 22LR pistol is for them.

The Ruger Wrangler, Ruger Mark IV, Walther P22, S&W Victory, and the Heritage Rough Rider are my top 5 favorite pistols in this caliber.

Each of the pistols is great for beginner shooters who want to learn the fundamentals of shooting a pistol without the fear of recoil and noise.

The Ruger Wrangler is designed as a plinking and training pistol, but can easily be used as a varmint hunting revolver if you train properly with it. It’s built around a cold hammer-forged barrel for better accuracy and longevity. The front sight is a blade with the integral notch rear sights for quick target acquisition. My favorite feature on this revolver is the transfer bar mechanism and the loading gate interlock.

These 2 features ensure you have the utmost level of security from accidental discharges from drops or other mishandling incidents. The Wrangler is finished with Cerakote to increase the durability and reliability in any environment, from rain, snow, sleet, hail, to high humidity.

This gun only weighs 1.88 lbs and is fired in a single action for a quick and easy shooting experience. At $199.00 and a significantly reduced recoil, there are not many better deals to get into the market for your first revolver.

Where Can I Buy The Ruger Wrangler .22LR Revolver? The SW22 Victory is a single-action, blowback semi-automatic .22LR pistol with an enclosed hammer in the slide. It features a match-grade barrel that is easily interchangeable after you run a few thousand rounds through it. Many people like the takedown of this pistol, but I don’t like having to use an Allen wrench because the new Ruger Mark IV allows for a tool-less takedown within seconds.

The S&W Victory requires you to remove a hex nut that can be easily lost if you’re not careful or loosen during firing if you’re not careful in reassembling it. The front fiber optic sight is very bright and offers a clear line of sight and if you don’t like it, it comes with a Picatinny rail for an optic or scope attachment. In the end, this pistol offers no recoil and is perfect for target shooting.

Where Can I Buy The Smith & Wesson Victory .22 LR? $454.99
at GUNS.COM
VIEW DETAILS
Prices accurate at time of writing

The Ruger Mark IV is one of the most simplistic pistols I’ve ever seen with the new and much improved one-button takedown. As Hickok45 explains below, this pistol is incredibly easy to shoot and takedown versus the original model. The barrel is cold hammer-forged for improved accuracy and increases longevity by not warping the metal as fast.

The Mark IV is built with an ergonomic bolt stop that is constructed to ensure the sight-to-barrel alignment is always perfect. This feature gives the Mark IV better accuracy than most other traditional slide pistols.

You can easily mount an optic or aftermarket night sight on the top because the Mark IV is drilled and tapped for both the Weaver and Picatinny Rail systems. It’s built with an ambidextrous manual safety lever for both right and left-handed shooters.

Where Can I Buy The Ruger Mark IV Target? $520.99
at GUNS.COM
VIEW DETAILS
Prices accurate at time of writing

The Walther P22 is the most compact .22 LR pistol on the market and offers an affordability that is rare for the number of features it has. Starting with the ambidextrous mag release and slide safety to accommodate left-handed shooters.

The P22 comes with interchangeable back-straps to fit almost any hand size and has better ergonomics in the grip than most other pistols. Although it’s built with a really heavy 11 lb trigger pull in double-action, it drops to around 5lbs in single-action for a smooth and easy pull.

As with any rimfire weapon, the range is limited because of the lightweight of the bullet and the way the striker hits the cartridge. This pistol can be used to hunt varmints, such as squirrels, groundhogs, rabbits, snakes, and coyotes.

Where Can I Buy The Walther P22? $363.99
at GUNS.COM
VIEW DETAILS
Prices accurate at time of writing

Heritage is one of the coolest gun companies because they’re one of the only companies left that are still truly inspired by our nation’s history. The Heritage Rough Rider was inspired by the original Rough Rider, Teddy Roosevelt, and the Long Colt that he carried.

This Rough Rider is chambered in a .22 LR and is made for plinking, varmint hunting, or target practice. I love the American flag grip and the old-school feel to the gun, but you can tell it’s not as nice as the all stainless steel big bore .45 or .357 Magnum revolvers. However, for $180 brand new, this is an exceptional revolver for the price and will get you comfortable shooting a revolver if you ever decide to upgrade to the big-bore models.

Where Can I Buy The Heritage Rough Rider? $148.99
at GUNS.COM
VIEW DETAILS
Prices accurate at time of writing

The Remington Thunderbolt .22LR ammo box on sale at Natchez Shooting Supply includes 500 rounds of 40-grain bullets! I just bought my box and I recommend you buy yours before this deal runs out. Everyone I know around my neighborhood has a .22 Long Rifle and everyone is always looking for a deal on bulk ammo. I wish you the best of luck and hope you enjoy the deal. The CCI 22 LR Suppressor ammo is best used with .22LR suppressors but is just as great for target practice at the range.  The type of powder used provides a cleaner burn and less carbon and debris inside the barrel.

CCI created this bullet to offer a reduced felt-recoil to compensate for the suppressor on the barrel. Each of these pistols is made by great companies that take great pride in their firearms. Shooting a pistol chambered in .22 LR is a lot of fun and meant for a specific purpose, other than carrying a self-defense weapon. I would only use these pistols to kill varmints, such as coyotes, foxes, gophers, snakes, raccoons, groundhogs, and squirrels.

I would never recommend these pistols for anything bigger than a coyote because they just don’t have the power and size to humanely bring down a deer or hog without a perfect shot.

These pistols are all accurate up to 50 yards before the bullet drop becomes a problem to adjust for. These pistols are also a great way to get someone into shooting for the first time without scaring them with heavy recoil and loud pistols.

Related Article – KelTec P17 Review | One of The Most Reliable .22 Semi-Auto Pistols