The Ruger Mark IV pistol is an incredibly popular option for those who want to shoot rimfire for fun or for introducing a new shooter to the sport. It’s even more fun when you’re doing it suppressed!

Most suppressors available today are stand-alone units that attach to the muzzle by way of directly threading onto the barrel or via quick connect/disconnect with a specially-designed muzzle device. However, several manufacturers are offering integrally-suppressed firearms nowadays.

Maxim Defense is introducing an integrally suppressed Ruger Mk4, the MKIV-SD, using their new rimfire suppressor. Anybody in the industry can make a 22 suppressor, but to make it REALLY good requires some serious design and manufacturing skills. 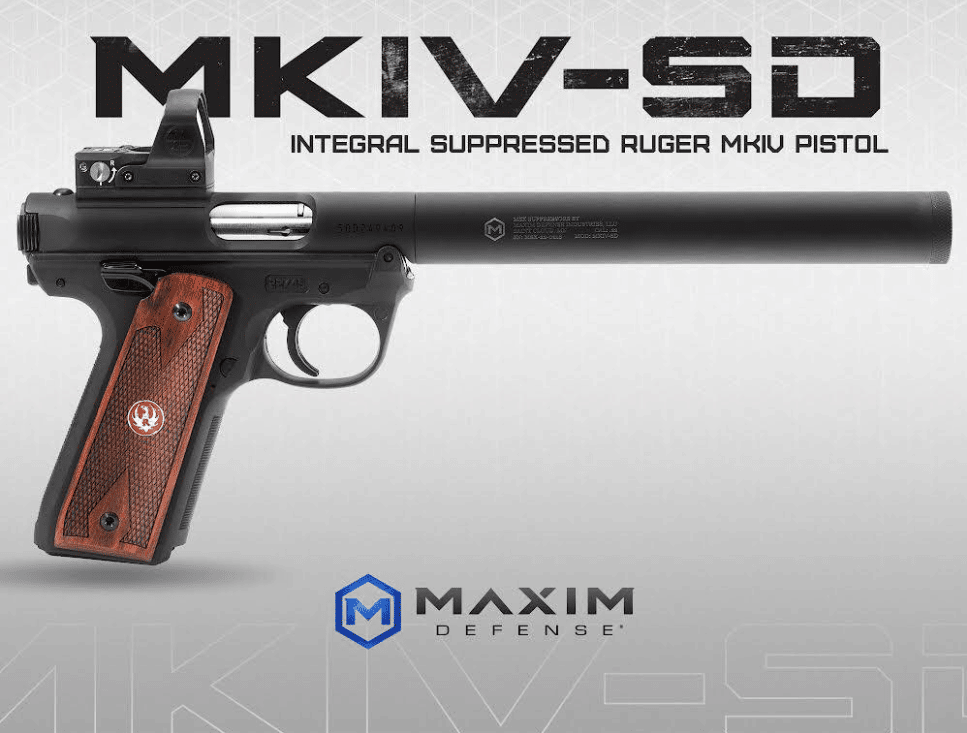 Their integral suppressor increases the overall length of the Ruger Mk4 pistol to only 12.6", making the MKIV-SD a great target pistol, competition pistol, rodent control pistol, or even for clandestine operations within the military and other agencies.

The development of the Maxim Defense integrally suppressed Ruger MkIV started with the WWII OSS integrally suppressed .22 pistol called the High Standard HDM.  The Office of Strategic Services (OSS) wanted a small pistol that was extremely quiet for clandestine field operations during the Second World War.

The design had a ported barrel and a diffuser which helped reduce the velocity of supersonic ammunition to subsonic velocities. It had a combination of copper mesh and simply designed baffles in the suppressor portion of the gun.

The benefit to this is that the operator can use any standard ammunition and not have to source and carry separate specialty ammunition that is explicitly subsonic.

Dr. Philip H. Dater loved the Hi-Standard OSS pistols very much. He began making his version of the pistol on Ruger Mk-II/III pistols with in-house designed K baffles in the 1960s while working at Automatic Weapons Company (AWC).  Dr. Dater made a few dozen over the years up until the 1980s and 1990s when he got more serious about production and started the company Gemtech (Gemini Technologies, Inc.).

When he was drawing and modeling the parts, Dr. Dater took advantage of the decades of development since WWII and applied more modern and efficient, but roughly equivalent components into the Ruger Mk-II/III integrally suppressed pistols which he called the Quantum.  He sold this product and enjoyed success at Gemtech for many years, until Gemtech as a company ceased as we all knew it.  At this point, Maxim Defense hired most of the Engineering and R&D staff out of Gemtech (early 2019).

Dr. Dater even joined the team at Maxim Defense, and one of the early R&D projects was to truly modernize the OSS/Quantum and bring it to the next level.  As a team, they identified the strengths and weaknesses of the designs that were well known and designed a system that fixed all of the shortcomings of the previous iterations.

The biggest problem was the K baffles.  K baffles are generally the best .22 baffles, but they get very dirty and are known for getting stuck in silencer tubes, preventing or inhibiting cleaning and maintenance.  To encourage maintenance, Maxim Defense designed a monocore that was easily removable and had robust tool features.

What Separates the MkIV-SD From other Integrally Suppressed 22 Pistols?

With the hardest part done, Maxim Defense finalized the rest of the components and tuned the diffuser perfectly for standard velocity ammunition, so the user doesn’t have to purchase specialized subsonic suppressor ammunition. There was one piece left; the sights. The sights were always difficult, and internally the R&D team agreed that the future of all pistols includes the ability for a factory pistol to mount a pistol optic and a light/laser.

Maxim Defense went to the drawing board and designed a series of optic mounts that replace the rear sight in the receiver and does not require modifying the receiver in any way while keeping the optic as low as possible.  Some of the designs include 1/3 co-witness backup iron sights while others are slick and only have a mount for a red dot. The two-piece design Maxim came up with allows the user to mount a light or laser under the suppressor tube on a piece of M1913 Picatinny rail if the user chooses.

One last accessory for the system that Maxim will be offering is a place holder for the suppressor.  One issue with purchasing integrally suppressed systems is that you (the purchaser) cannot take them home that day of purchase. The customer has to pay for the item, then do the ATF Form 4, pay the $200 tax stamp to Uncle Sam, and play the waiting game -all before they can take it home. That being said, with the new E Form 4, the waiting period is much shorter than it has ever been before.

The only thing that the user has to do is unthread one and put the other on.  And the light/laser mount piece has a nicely designed window for clearly exposing the engraving on the suppressor when it is mounted.

With all these design enhancements, the Maxim Defense Ruger MkIV-SD using Federal standard velocity ammunition and measuring via the standards outlined in the military manual MILSTD 1474-D/E typically saw 114dB and sometimes a little less on a good day.  It has very little if any gas blowback to the shooter and feels great in hand.

The Maxim Defense Ruger MkIV-SD is the crescendo, the final form of the integrally suppressed .22lr pistol and quite possibly the best design on the market. 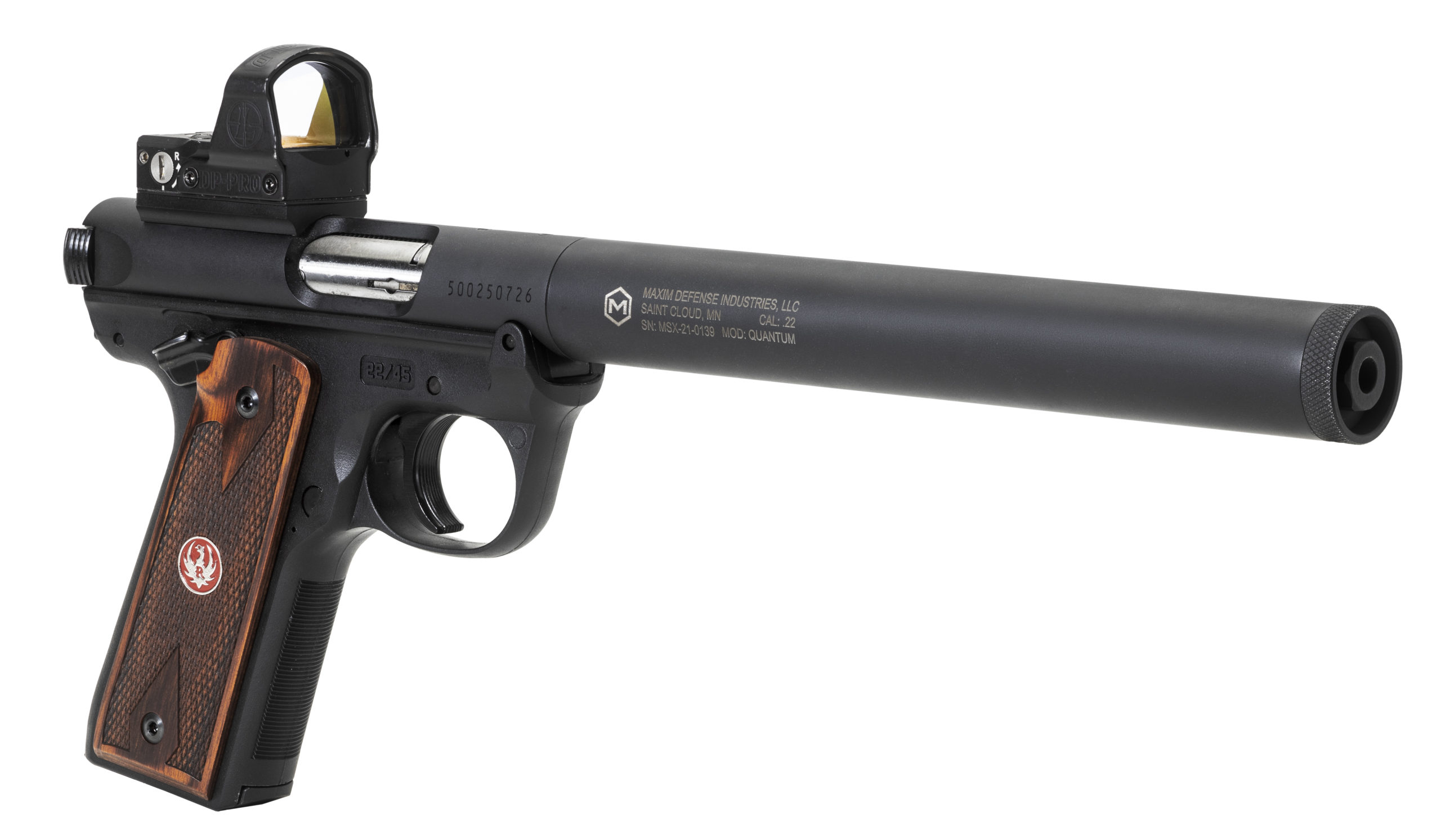 Advantages of an Integral Suppressor

Maxim Defense has taken sound suppression to the next level by integrating its 22 suppressor design into the barrel of the Ruger Mark IV.

Integrally suppressing a barrel offers many advantages over a direct thread or quick-attach suppressor.

By design, an integral suppressor offers improved accuracy as there’s no impact shift to deal with.

If you’ve ever swapped an external suppressor between different firearms you know how that can affect the point of impact and requires you to re-zero your red dot or scope.

In addition to variances in the bullet impact, is the overall size and weight of detachable suppressors. When you add an external suppressor to most firearms, you have to get suppressor height sights or taller scope rings.

When choosing the integrally suppressed Ruger Mark IV from Maxim Defense, the overall diameter of the barrel does not add any height, so in most cases, you can keep your current optics.

Since the suppressor is built into the barrel on integrally suppressed firearms; this makes the chosen firearm shorter, lighter, and more balanced than the same firearm with a detachable suppressor.

Ergonomics are greatly improved with the integral suppressor design from balance, handling, and feel to ease of use.

Every suppressor you decide to purchase requires a $200 tax stamp issued through the ATF. The biggest advantage of removable suppressors is the ability to use a single suppressor on multiple firearms.

Integrally Suppressed barrels have a unique serial number identifying the issued tax stamp for that suppressor. If the barrel becomes damaged or worn out, you cannot just drop in a new suppressed barrel.

If you have to replace the serialized portion of your integrally suppressed firearm, the replacement requires another $200 tax stamp in addition to the cost of the new barrel and returning the firearm back to the manufacturer for repair or replacement.

Maxim Defense is offering two options. First, you can buy the complete firearm, or second, you can send in your Ruger Mk IV and they will convert it to be integrally suppressed.

The two-piece design that allows the attachment of a light or laser under the suppressor tube is slated to roll out very soon, along with the place holder according to Maxim Defense. 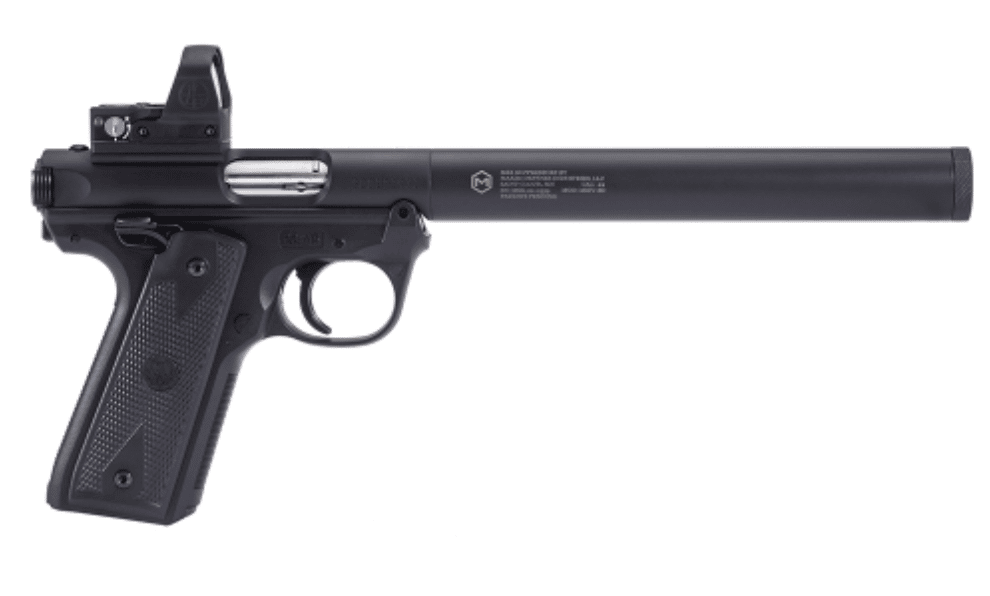