Blue Force Gear is an American company dedicated to making the best gear on the planet. From slings to plate carriers and mag pouches.

They make a bit of everything for the military, law enforcement, and the prepared citizen.

The Blue Force Gear Vickers Combat Application Sling is likely what they are most well known for. They make a wide variety of different Vickers Sling configurations for just about every use. 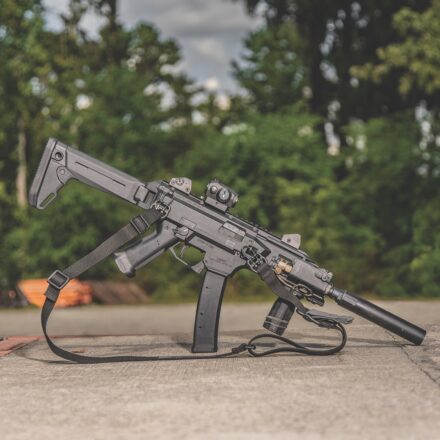 They recently launched a new sling for a submachine gun with the help of Larry Vickers, but first, let’s cover the original sling since many of its features carry over to the new SMG sling.

Larry Vickers has never been a fan of single-point or those complicated three-point slings. He identified the issues with the standard two-point slings and set out to design one based on his operational experience.

So, what sets the Vicker’s Combat Application sling apart from other two-point slings? The ability to rapidly adjust the length. The combat application sling is designed for a carbine, specifically the AR-15, but it can be moved to different carbine setups with the proper sling mounts.

For those that shoot an AR pistol or pistol caliber carbine, the need for a single-point sling would sometimes arise. For that, Blue Force Gear created the Vickers 221 Sling.

The evolution of personal defense weapons has evolved so much so that point slings are in higher demand. Platforms such as the Maxim Defense PDX with their patented pistol system require a single-point sling to effectively employ. Again, Blue Force Gear has answered the call with their newest sling. They have taken the 221 sling and made improvements for it to excel on submachine gun platforms. Out of those improvements the Vickers SMG sling was born.

Blue Force Gear has expanded their Vickers line of slings with a new model specifically for SMGs and personal defense weapons.

This scaled-down version of the Vickers Sling features the quick adjuster you are used to on the other models. What sets it apart is the ULoop attachment.

With the ULoop, there’s no exposed metal which helps eliminate noise and won’t mar your guns surface.

Alternatively, you can attach the sling back in its self if you prefer single-point applications for sling tension shooting an SMG.

The new Vickers SMG Sling is Offered in black, coyote brown, MultiCam, and wolf grey. These are Pre-Orders, so your sling will ship one week after placing an order.