I may not be poor, but I don’t have enough money with buying my first home to buy 5 boxes of 30-06 ammo right now, especially at $35-$50 per box. It would be hard to justify spending hundreds of dollars on ammo when we have all these new expenses to consider. However, there is no way that I’m not going to hunt as much as I can, so what can I do to save money?

The easiest and best way to save money, improve your accuracy, and knowledge of ammunition is to load your own ammo. You can’t even think about reloading your own ammo until you have a good powder dispenser. I’ve shown why the Frankford Arsenal Intellidropper is so great for reloading 9mm ammo, but today I want to show you why it’s the best for hunting caliber bullets, such as the 30-06, .308 Win, and the 7mm Rem Mag. $182.99
at Amazon
VIEW DETAILS
Prices accurate at time of writing

Why Should I Reload My Own Rifle Ammo?

Depending on which state you’re in, you still may have a week or two for rifle hunting season for whitetail deer. This means you should already have your scopes zeroed in, rifles cleaned, and gear ready to go. However, ammo is still not as easy to find for the most popular calibers we use for hunting, including 30-06, .308 Win, and 7mm Rem Mag. If you don’t have a laser bore sighter, anti-cant tools, a proper torque wrench, and a great shooting platform, it could take you a box of ammo to sight in your rifle scope.

Reloading your own rifle ammo will bring down your overall cost from $35-$50 per box to as low as $10 per box in today’s market. However, pre-covid times you could find ammo components for as low as $5-$7 per box of 20, 30-06 bullets. Even in the darkest of times, you’re going to save at least 3X the money with reloading your own ammo versus buying commercial ammo. 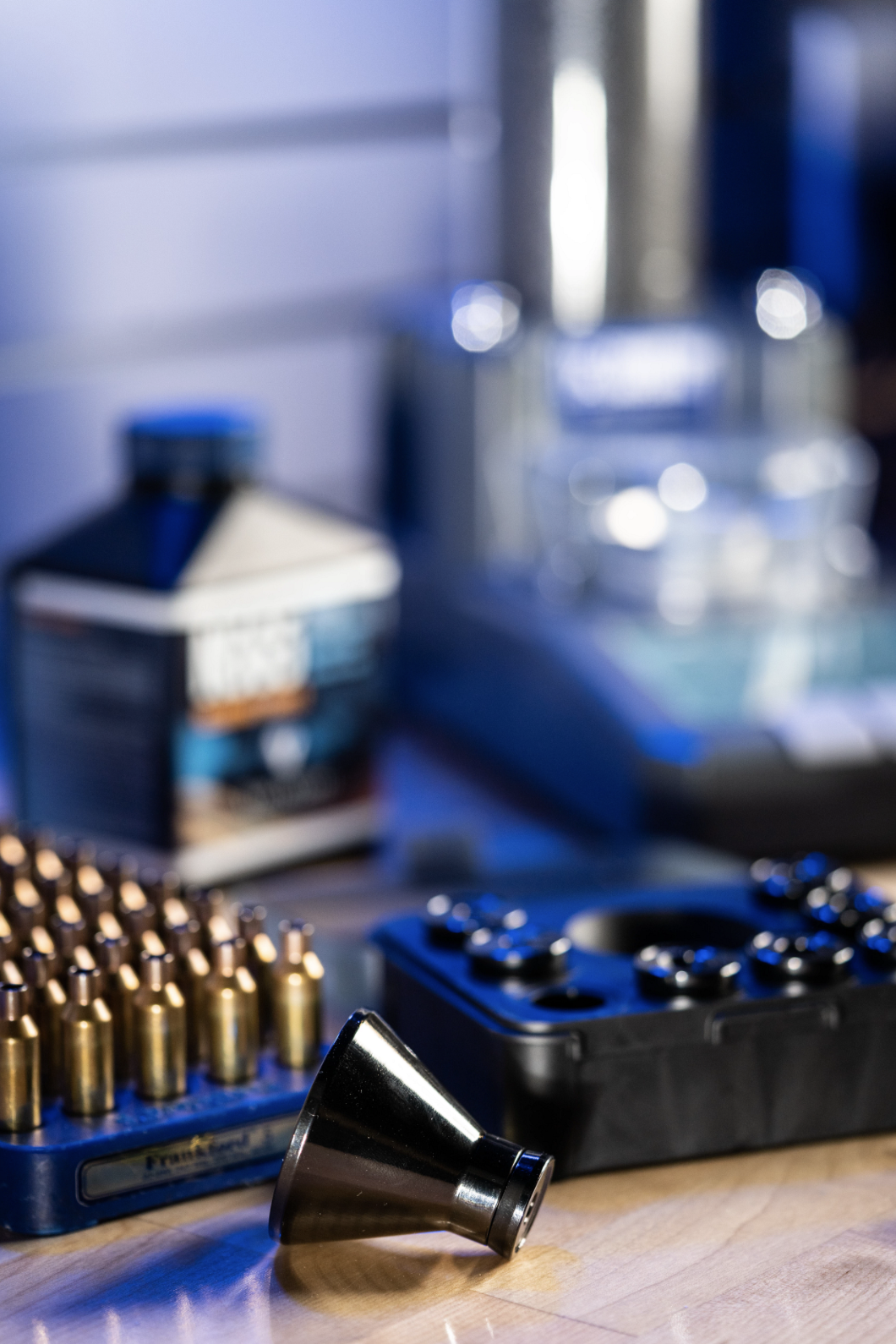 Is There a Difference Between Commercial and Hand-Loaded Ammo?

It’s easy for someone to say there is a difference between commercial and hand-loaded ammo and not really have to back up their claims. However, I want to show our readers the actual evidence of the inconsistency of commercial ammo.

I chose to use my 2 commercial hunting ammo brands; the Winchester Deer Season Extreme Point (XP), and the Remington Core-Lokt 30-06. I want to emphasize that I’ve killed at least a dozen deer with these bullets, so they’re not bad, just not as good as a hand load.

The point of this table is to show you that with commercial ammo, you can have the same bullet weight, cartridge, and case size, and still have different weights between the 2 brands. This is of no fault to Winchester and Remington because I wouldn’t use them to hunt with if I didn’t trust the quality of ammo they make.

However, commercial ammo is made to fit universally across the spectrum for each caliber. This makes a lot of sense because if Remington, Winchester, Hornady, or Federal, created specific ammo for each rifle, they’d go bankrupt trying to sell in mass quantities.

Commercial ammo has to be as generic as possible in order for companies to sell enough to turn a profit. My other complaint with commercial ammo is that even within the same box of ammo, the case and cartridge weight could be different. Even though these differences are minimal, when you consider shooting a bullet at distances of more than 300 yards, you need optimal consistency.

I know your initial thought, this doesn’t seem like a big difference if you’ve never reloaded your own ammo, but it’s a huge factor if you’re shooting at longer ranges. The Marines have a saying, “aim small, miss small", but if your ammo isn’t consistent your shot placement will never be as good as it could be. This is why it’s so important to be able to dial in the specifications of the ammo you’re using to hunt.

Why is Ammo Hard to Find?

Ammo is so hard to find for multiple reasons, but the biggest being the Covid Pandemic. Once Covid hit the world, all manufacturing had to stop until we understood the virus more. Covid also led to the current crisis of the supply chain issues with trucks, ships, and aircraft. As many of you have heard by now, the transportation issues we’re facing in the country have caused delays and canceled orders. Until manufacturing catches up fully and the supply chain issues get worked out, we’re going to see ammo shortages and higher prices on components. 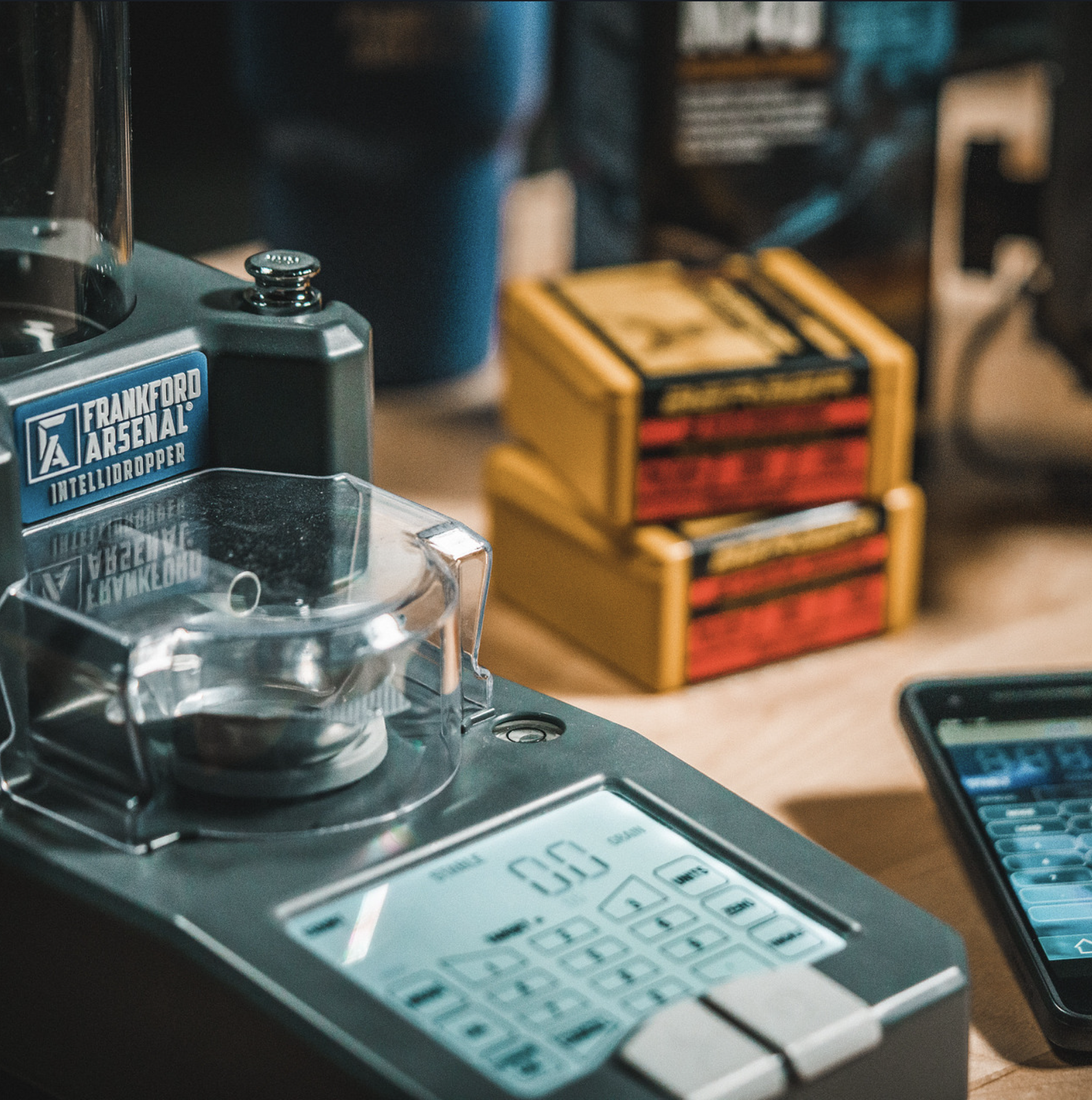 How Do I Handload Rifle-Caliber Bullets?

Using the Frankford Arsenal Intellidropper has changed the way I hand load my own ammo because of the precision it provides and the confidence it instills in me. I shoot a 30-06 Winchester Model 70 for 90% of my hunts. For this reason, This blog will be a step-by-step guide on how to reload your own 30-06 ammo with the correct amount of gunpowder every time without worrying about overloading or underloading. However, the same principles of the 30-06 can be applied to the .308 and any other rifle caliber bullet.

Read our Beginner’s Guide to Reloading if you’re not sure where to start. 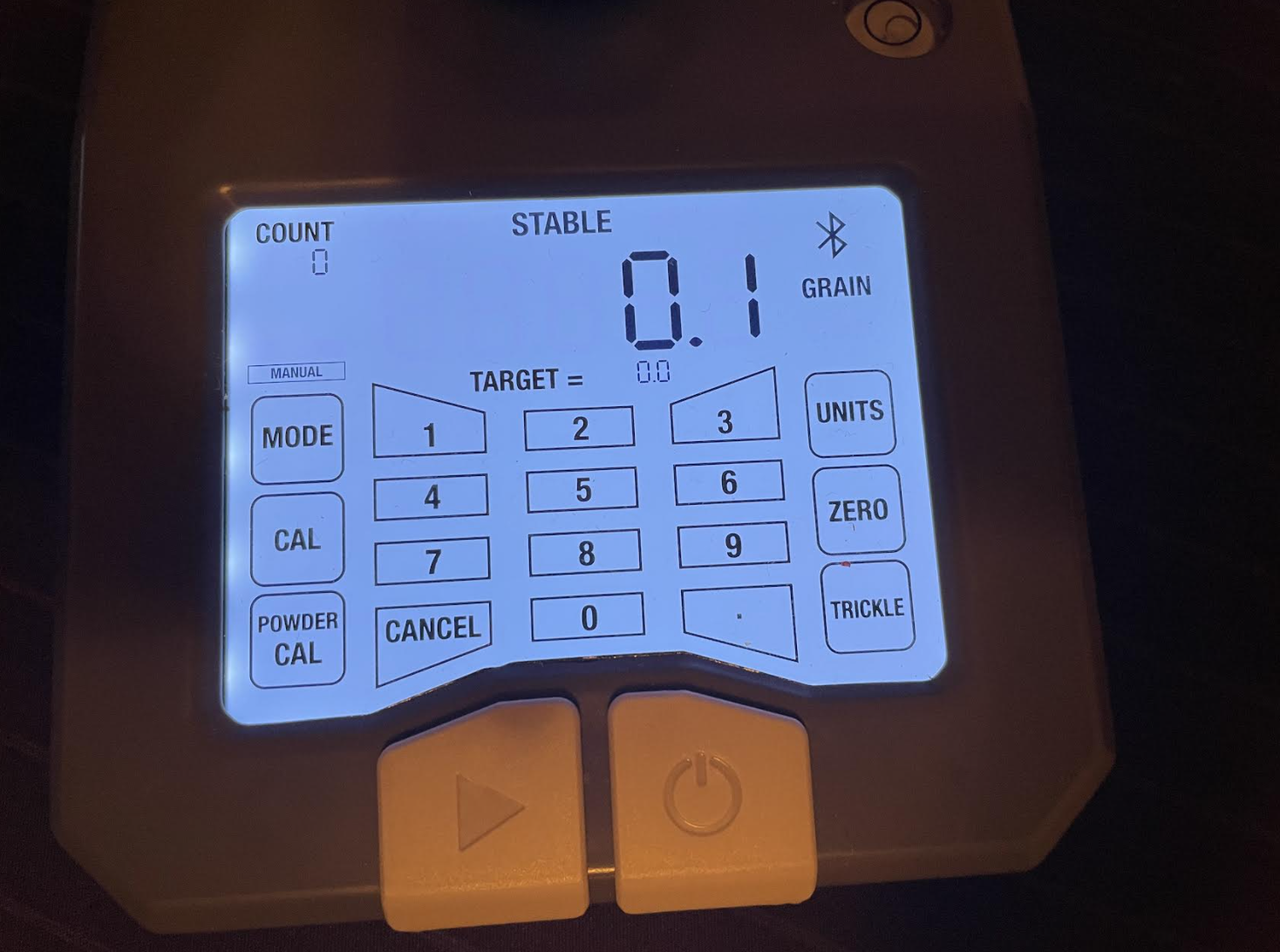 I provided a 7-step user guide with pictures to show you exactly how to calibrate your Intellidropper in our The Best Powder Measure for Reloading blog. I’ll post the steps, but the full guide is on the other blog.

I use Hodgdon or IMR gunpowder in all of my hand loads because I’ve always been told it’s the best gunpowder to use. For my 30-06, I use the IMR 4064 Smokeless gunpowder and follow the guidelines for the Hodgdon Reloading Data Center. For this demonstration, I used the starting load recommendations of 47 grains per load. My Winchester Model 70 shoots more accurately with a 49-grain charge. The only way to find this out is to start with 47 grain and shoot a few rounds with the only change being the charge weight.

For example, keep the same case, bullet, and primer, but change the charge you put into the casing to dial in your bullet. Obviously, once you find the right charge weight, you can start trying different bullets and cases. 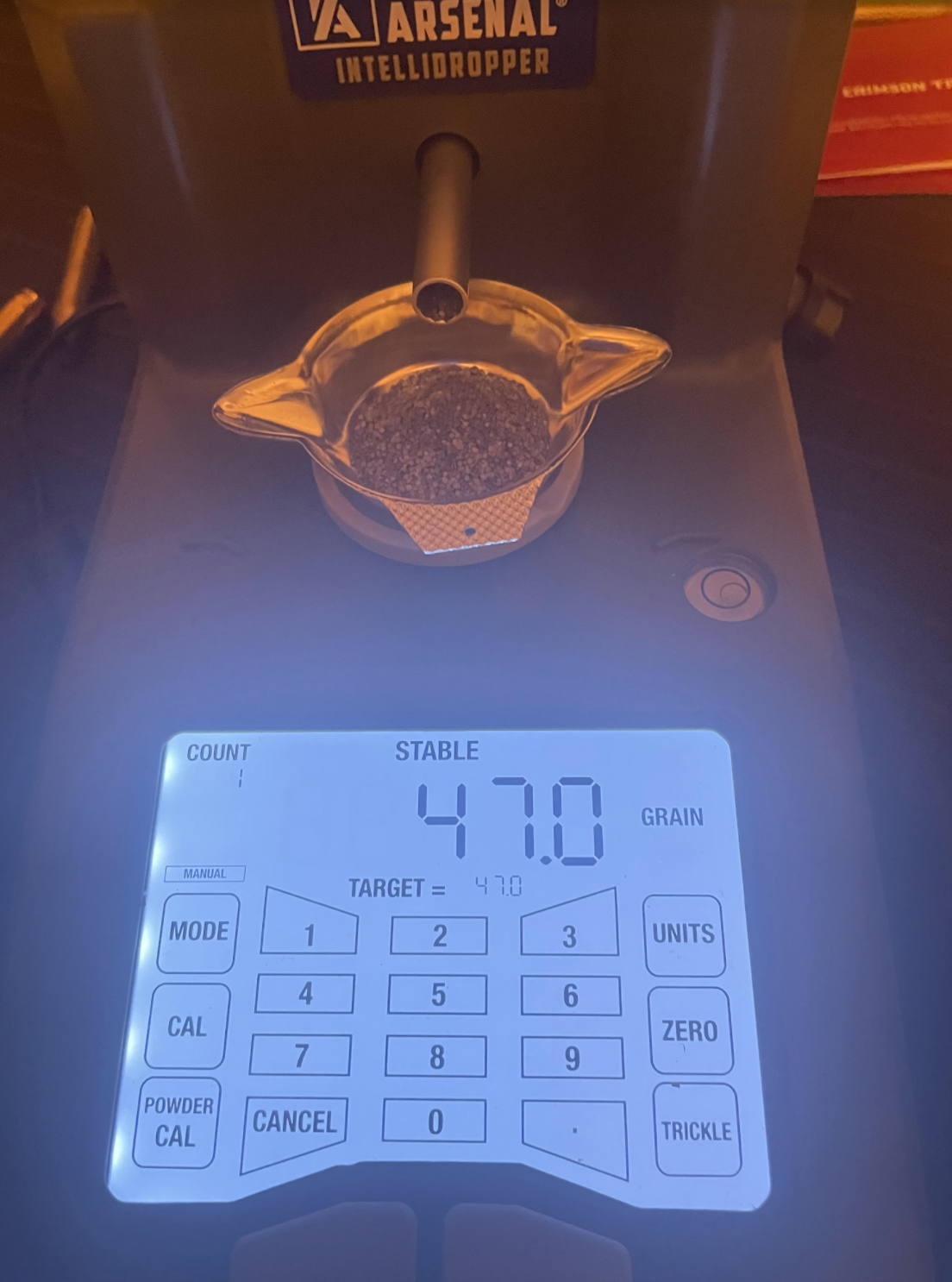 After you dispense your gun powder, it’s time to charge your cases and keep them secure and organized. The problem with this task is you need to be as precise as possible and that means you can’t spill any gunpowder trying to place it in the cases. The first thing you need to do is get a Universal Reloading Tray that can accommodate any size bullet you’d ever shoot. Once you have each bullet stored in the reloading tray, you need to use a funnel to ensure that you don’t spill any gunpowder. $7.99
at Amazon
VIEW DETAILS
Prices accurate at time of writing

Step 5 | Use a Specialised Powder Funnel

The only way I know of to ensure that you don’t spill any gunpowder is to use a specialized powder funnel kit that attaches to your case, magnetically. The Frankford Arsenal Aluminum Powder Funnel Kit is vital to creating the most accurate possible load. Even 1 grain of powder can make a difference in the accuracy of your weapon. There are other companies with comparable funnel kits, but none as practical and easy to use as the Frankford Arsenal Funnel Kit. $32.99
at Amazon
VIEW DETAILS
Prices accurate at time of writing 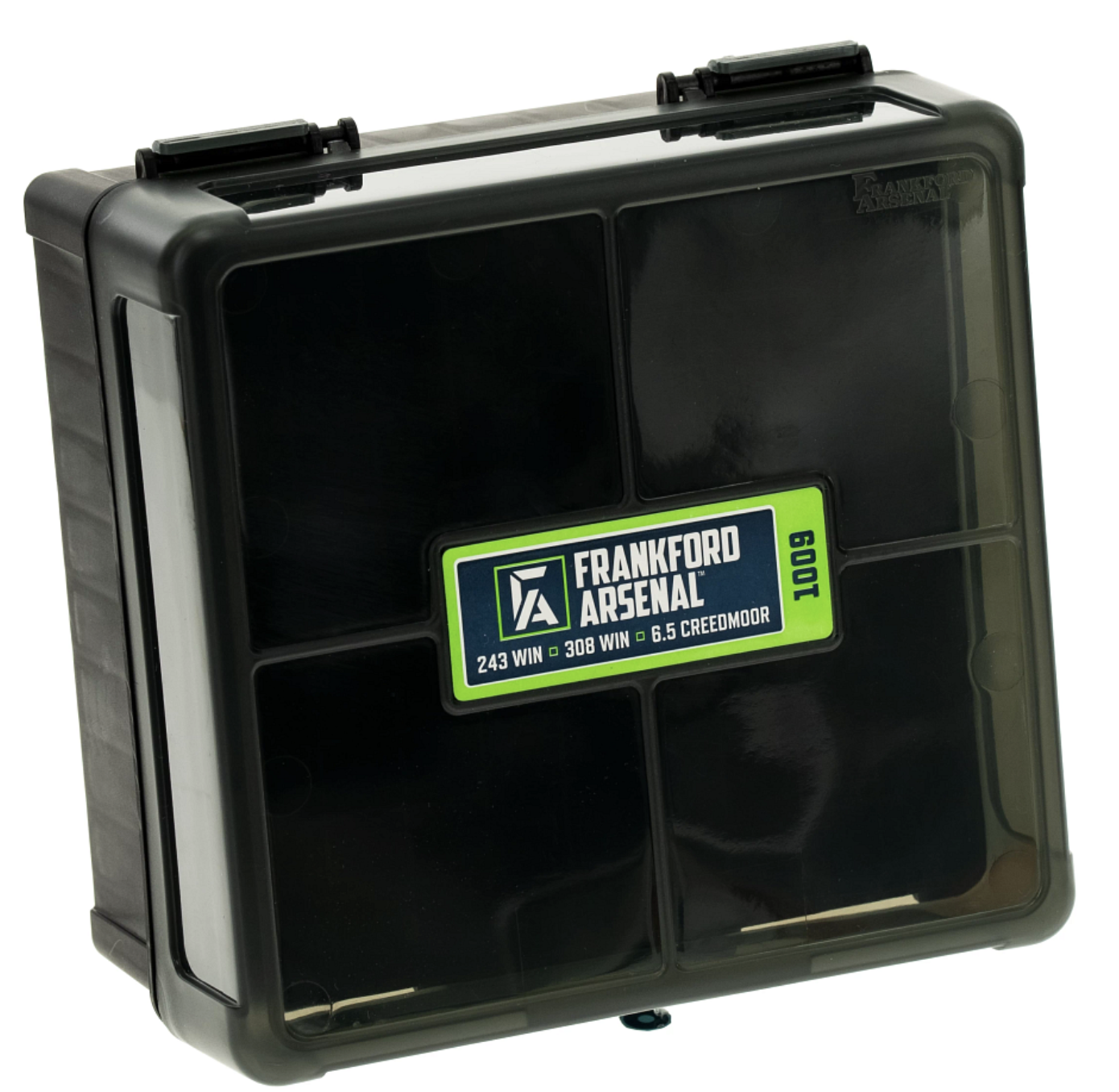 Why Would I Choose the Frankford Intellidropper?

As you can see with commercial ammo, the brass is inconsistent and by definition, can never be specifically made for your rifle. However, the Frankford Intellidropper brings that level of inconsistency down to +/- 0.1 grain.

The opportunity to be within a single grain of your intended weight will provide you with the best ammo you’ve ever shot with. For hunters, especially those hunting in the Rockies, a 300-500 yard shot is common. Being able to dial in your charge weight can vastly improve your accuracy over long ranges even if the only thing you changed was the charge weight.

The Intellidropper can be used to dispense gunpowder for any caliber bullet you own and save your data after each charging session. It’s a smart machine that can be used from the palm of your hand with the Intellidropper App and it’s offered at an extremely low price right now on Amazon.

Where Can I Buy the Frankford Arsenal Intellidropper?