The Best Home Defense Weapon | According To You

If you’ve ever had the talk about the best home defense weapon, chances are you’ve heard someone mention getting a shotgun. According to many self-proclaimed experts, shotguns are easy to shoot, inflict a wide shot pattern that helps poor shots hit their target and might even scare away an intruder with the simple sound of a shell being loaded into the breach. But we wanted to take a look at this age-old idea that shotguns are the best home defense weapon and see if there are any other viable options on the market. For this review, we look at a handgun, shotgun, AR-15, bat, knife, and dog as potential home defense weapons and assess the pros and cons of each. So without further ado, here’s our in-depth review!

How our Readers Chose their Results

We posted a poll in our RE Factor Tactical Team Room Facebook group asking our readers what they believed was the best self-defense weapon. We gave the option of Shotgun, Pistol, AR-15, Bat, Knife and Dog as their preferred weapon of choice. Below you will see the “RE Factor Tactical Reader’s Score”. This pertains to the number of votes that item received as the preferred self-defense weapon. There’s no doubt, a shotgun can cause some serious damage. You don’t even necessarily have to be a good shot since you get a wide shot pattern. If someone breaks into your home, we’d imagine you’re in a small, enclosed space. Really all you have to do is shoot the thing and you’ll hit the target (unless you’re aiming in the opposite direction or something insane like that). However, when holding it up against other firearms, the shotgun isn’t the number one option for home defense. It’s definitely a cheaper option, and the sound of a pump-action shotgun to an intruder can definitely be a deterrent. However, they’re big,  don’t hold as many rounds as an AR or pistol, and they’re heavier than a pistol. Pistols only ranked slightly lower than shotguns. You have to have more technique with a pistol than with a shotgun and they can be more expensive in some cases. However, if you do miss, chances are you have more opportunities to make your shot placement than you did with a shotgun. Another plus to a pistol is it’s easy to carry outside of the home (depending on legalities, of course). Besides that, rounds are generally cheaper than what you might find for an AR-15. There’s also the age restriction. If you happen to live on your own before you turn 21, you’ll probably find yourself restricted to a hunting rifle or shotgun as a source of home defense. 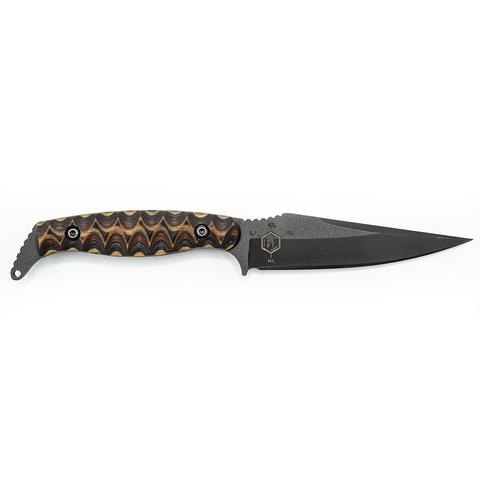 In 2017, knives were the second leading cause of murder, right after firearms. What does this mean? Well, it means they can kill someone if you want them to. While they can inflict some serious damage and even death, we personally wouldn’t recommend them as a go-to home protection weapon. Knives are inherently a personal weapon in the sense that you must be very close to your target to inflict wounds. This proximity makes you vulnerable to counterattacks.

Further, knives can be difficult to use if you don’t know what you’re doing. They can easily stick into bones, get caught on clothing, or slip out of your hand making follow up attacks difficult. It also means there’s a chance you could find the knife being used on you. That being said, expert knife fighters are extremely dangerous and if you know what you’re doing you could potentially be a lethal force to reckon with. However, to get to that proficiency takes a long time of mastering a new craft. Another hit against knives comes with post-litigation or prosecution. Following any attack your actions, no matter how justified, will be questioned by authorities to see if you used the proper level of self-defense.

Attacking someone with a knife is very deliberate and often takes multiple strikes in order to either stop or kill an attacker.  If you kill an attacker with repeated stab wounds, the quest may arise of whether or not you used an appropriate level of force. Could you have stopped after one stab? Did you need to stab them multiple times? Did you stab them in the right place? Believe it or not, these are all questions you might be asked following an attack.  One of the good things about knives is just about any home has one. So if you find yourself in a self-defense situation with no other option, it still might be better than nothing.

We tend to put bats in the same categories as knives. Bats accounted for a third of the number of murders as knives in the USA in 2017 and probably for a good reason. In order to inflict some serious damage on someone, you need to be pretty precise and pretty strong. Bats are easy to defend against and there’s a strong chance you’ll find yourself on the receiving end of that weapon if you get tangled up with someone who’s bigger and stronger than you. Bats are also like knives when it comes to the post legal process. Try explaining to the police officer why you needed to hit the attacked 150 times to get him to stop coming at you. Conversely, like knives, bats are inexpensive and readily available. Also if you live in a state where the gun laws aren’t exactly the most favorable this could be a potential option. But if you’re looking for the best self-defense item, we’d suggest keep on looking.

Our Top Bats For Home Self Defense

Believe it or not, some bats are better for self-defense than others. The biggest thing is selecting a bat that’s aluminum rather than wood with a good solid grip. Wood bats can break, meaning they’re not ideal for use. It’s kind of hard to classify a dog as a home defense weapon because the reality is most pups are more of a deterrent than an actual weapon. That being said, there are several programs that will offer you a true home defense dog that will inflict some serious damage if anyone were to ever try and break-in. Hands down your biggest advantage of owning a dog is that most intruders simply do not want to find out if your ferocious cocker-doodle is actually a threat. For this reason alone, owning a dog is probably one of the best ways to go if you’re looking for a quick enhancement to your home defense plan. We also advocate adding a beware of dog sign as an inexpensive way to make your house appear more secure. As mentioned, not all dogs are created equal when it comes to home defense. The reality is your terrier won’t have the same bite as a Dutch Shepherd, so it’s important to choose wisely if you’re looking for something that’s going to offer some serious protection. And not every scarry dog will actually defend the home, although it should act as a great deterrent if anything. Here’s a list of some of the best guard dogs according to the AKC. The AR-15 ranked significantly higher than all of the other home defense options we gave our readers to select from. They’re easy to use, hold more rounds, are versatile, and more accurate than a pistol. While they might be harder to use in tight spaces, they sure do have some firepower. Of course, with that firepower, as with all weapons, comes responsibility. Your main goal in home defense is to defend your home. So, if you shoot through the intruder and hit your child in the next room over, you haven’t protected what should be the most valuable part of your home, the family.

Arguments Against using an AR-15 for Home Defense

Since this is the winner of our reader’s choice for home defense, we’d like to address some of the concerns or arguments people have against using an AR-15 as home defense.

The AR-15 was Intended for Military Purposes

Guess what, so was duct tape. So, if that’s your argument, better stop using that and your microwave…man, life is about to get real inconvenient for you.

There might be some truth behind this, in the sense that it’s much easier to go through 30 rounds in an AR-15 than in a shotgun. Not because you can’t do it, but because it takes a lot less time to do it. But, let’s be honest here; conserving ammo when an intruder is trying to harm your family will be one of the last things on your mind. If it takes 30 rounds—and let us all hope it doesn’t—to bring down an intruder all hyped up on bath salts, would you rather it take 30 AR-15 rounds or 30 shots from your shotgun? Yes, this may be a bit of an extreme example, but for the sake of the argument, this is what we’re going with.

Alright, no one said that your gun had to be boring. Why can’t it get the job done sufficiently and look cool? We’re pretty sure those making this argument are just jealous. Okay, maybe that’s not entirely accurate.  If we’re being honest here, it is a pretty intimidating gun, and I’d be more afraid of what it could do to me as the bad guy than someone with a pistol.

Umm, the chances of using life insurance before you’re 65 is pretty low too, but that doesn’t mean people don’t get it. Why would you not prepare yourself for the worst in hopes of the worst not happening?

This argument is probably the most legitimate. The biggest concern with using an AR-15 for home defense is not knowing what’s behind your target. AR rounds travel further and faster than your 9mm ammo, and because of this, it is very likely it will travel where you might not have intended. And while it’s easy to sit there and say that you know what’s behind your target and you practice safety to your utmost ability, you should also ask yourself if that will be the case when things are going crazy.

Do you live in an apartment? Do you live in a city where there are lots of people and other homes? Before you choose an AR-15 as your home defense weapon, make sure you take into account your surroundings and what other damage you may cause in the process by firing it for home defense. The last thing you want to do is take down the bad guy and hit the good guy you were attempting to save in the other room. With that being said, no matter what type of gun you own or use as defense, you should always practice safety. And part of that safety requires you to be both smart and responsible with where you’re using your firearm.

So, there you have it folks, your readers’ choice of home defense, the AR-15.

Have other ideas on how you protect you and yours? Add a comment below and share it with the rest of us!