22LR has been around since the late 1800s. Today it’s one of the most popular rimfire rounds. Firearm enthusiasts use it for plinking, small game hunting or control, and training new shooters…especially when suppressed!

There’s a reason a lot of people consider 22 suppressors to be the gateway drug into the world of suppressors or silencers. They’re near "Hollywood quiet," have an affordable price point (except for the $200 tax stamp), and are a blast to shoot.

With so many different makes, models, and options to select from when choosing a 22 suppressor, it all may seem a little overwhelming at first. But, it really doesn’t need to be. There are a few key things to understand which will narrow down your list, then it ultimately comes down to the price.

We’ve put together this blog to answer some of the common questions as well as what our top four 22 suppressors are and why.

What is the Most Effective Suppressor Design?

The two main suppressor designs you’ll come across when shopping for a 22 suppressor are monocore and baffles. Both work well if designed and implemented correctly.

The inner core design of rimfire suppressors can be divided into three categories; monocore, CTA baffles, and k-baffles.

Monocore is the strongest design out of all the options.  The monocore is a key piece to the strength of this design.  The front-loading monocore makes maintenance super easy.  Every time the user shoots, when they are done shooting, they just spin the core out and put it back in.  As long as they do that it will never carbon freeze and lock up like all .22 suppressors are prone to do.  Once the monocore is out of the tube, its design is conducive to ease of cleaning if the user wants to scrub it with a nylon brush and some solvent.

CTA baffle stacks are individual baffles that stack on top of each other inside the suppressor tube. They might be a little more difficult to clean, but they prevent lead fouling from getting between the baffles and tube and seizing them up. Baffle stacks are easy to disassemble, there are just more pieces to keep track of versus a single monocore.

Last but not least are the K-baffles. Where does the name come from? If you look at a cross-section of a single baffle, it resembles the letter K. out of these three core designs, the K-baffles offer some of the quietest 22 suppressor designs but can be a little more difficult to maintain and service.

An unsuppressed 22LR creates a sound level of roughly 140dB to 160dB depending on the type of ammo. Standard velocity 22LR ammo averages 140dB. High-velocity ammo will be slightly louder while subsonic ammo will be considerably quieter at around 120dB.

Anything 140dB and higher can cause permanent hearing damage, so it’s imperative that you wear hearing protection while shooting unsuppressed firearms.

How Quiet is a Silenced 22LR?

With the average sound reduction of 41dB, it’s easy to see why people would want to suppress a 22 pistol or rifle.

All the suppressors on this list bring the sound levels down to between 113dB and 119dB.

What Calibers Can You Shoot Through a 22 Suppressor?

This is dependent on the manufacturer. Some specify that their suppressor is only rated for the .22LR cartridge while others will be rated to shoot not only .22LR, but also other rimfire cartridges.

Suppressing the .22 Mag or .17 HMR, will require either a stainless steel or titanium suppressors since they can handle the higher pressures of those rounds.  In some cases, those suppressors can also suppress the FN 5.7. For example, the Maxim Defense DRF-22 is rated for .22LR, .22MAG, and .17HMR.

What is the Quietest 22 Suppressor?

To determine how quiet a suppressor is, many look at the advertised dB rating. The quietest suppressors generally run in the 113 to 115dB range, but there is an additional feature that you need to consider; the first round pop.

Although many 22 suppressors are pretty damn quiet, not all reduce or eliminate the first round pop.

The DRF-22 suppressor is specifically designed to minimize the increase in cyclic rate and gas blowback of a suppressed rimfire firearm.

Primary design features include the significant reduction of sound signature, decreasing flash signature, reduction of recoil, and increasing the accuracy of the suppressed firearm.

The DRF-22 is all 7075-T6 aluminum and is hard anodized, with the exception of the core.  Dr. Phil Dater and the engineers at Maxim Defense know that aluminum in the white is measurably quieter than any other coating.  Additionally, Maxim Defense Cerakotes the end of the monocore so it doesn’t look funny.

The thread mount is grade 5 titanium.  Most .22 suppressors utilize a titanium thread insert in the back, but technically speaking that is one more interface that adds to the likelihood of bad alignment.  Maxim Defense opted for a solid titanium thread mount for a more reliably precise part and fewer parts in the overall package.

Check out this blog for a more in-depth look at the Maxim Defense DRF-22 suppressor.

The Rugged Mustang 22 is a featherlight silencer – the lightest suppressor of their line. Utilizing Rugged’s ADAPT™ modular technology, it offers the best of both worlds with its standard and short configurations. The Mustang is the newest suppressor to lighten the load by weighing a mere 2.4 ounces and measuring 3.4 inches in its short configuration.

Keeping with Rugged’s proven quality, it is exceptionally durable and lightweight, thanks to its construction of Grade 5 titanium, 7075 aircraft-grade aluminum, and high temp Cerakote® finish. This powerful .22 suppressor eliminates first round pop with top-rate suppression and carries the promise of longevity with its build and unconditional lifetime warranty. Built with slotted baffles that create a gas seal, the Mustang prevents the pesky carbon and gas build-up between the tube and baffles. The OSS Rad™ 22 is an exceptional 22lr suppressor that is extremely lightweight and quiet. Constructed of titanium and stainless steel, this OSS Rad 22 suppressor is only 5.5 ounces with a 5.57-inch length. Using their patented next-generation Flow-Baffle™ technology, the Rad 22 greatly reduces blowback while still providing incredible sound reduction. This technology allows the expanding gases to redirect in a helix pattern so that the gas cools as it moves through the body of the silencer.

Another incredible feature the OSS Rad 22 provides is its user serviceability. As you already know, 22lr ammo is dirty, so having a user-serviceable 22 suppressor is incredibly important. Between its incredible lightweight stature, sound performance, and reduced blowback, it’s no wonder the OSS Rad 22 silencer is so popular!

The BANISH 22 suppressor is designed for use with rimfire pistols and rifles chambered in .22 caliber and smaller. This includes .22 Hornet, .17HMR, and even 5.7×28. It’s even rated for full-auto!

Tests have shown that the BANISH 22 brings sound down to about 120 decibels, which is just 10 decibels more than a BB-gun. Essentially, this is as close to "Hollywood quiet" as you can get. 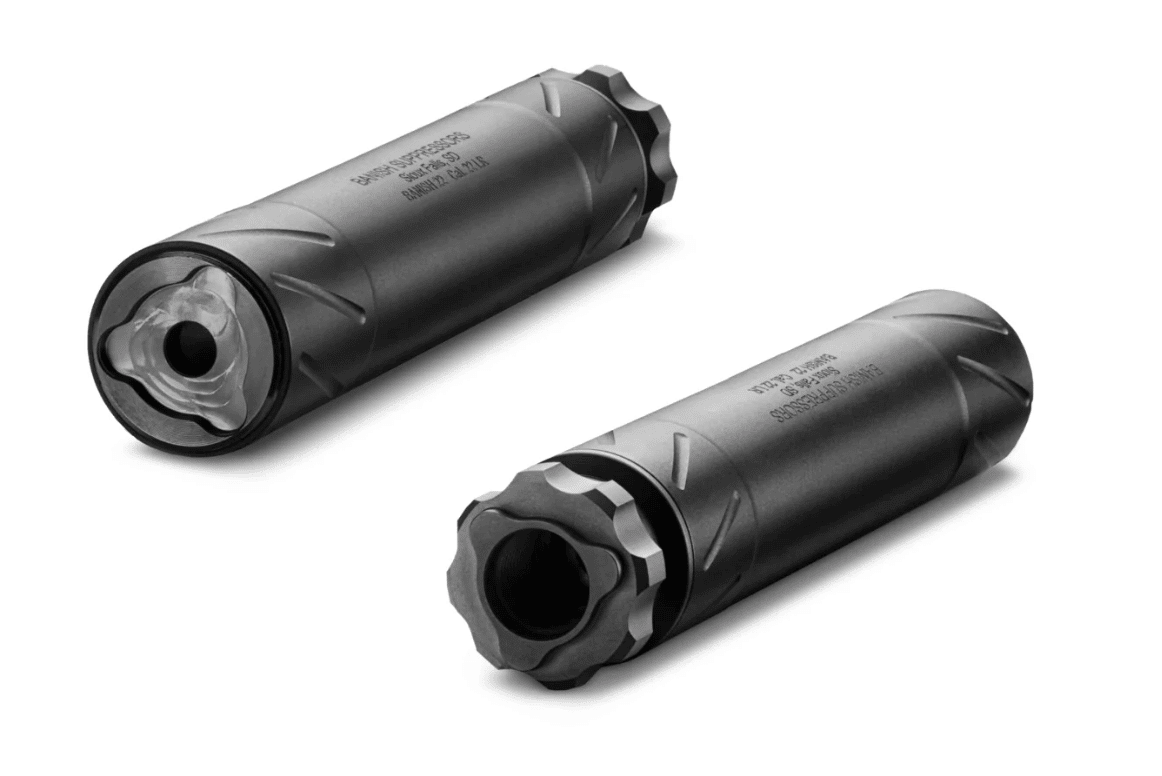 Shooting a suppressed 22 is Hollywood cool. These suppressors not only reduce the noise level but reduce felt recoil, provide flash suppression and optimize the cyclic rates of suppressed 22 firearms.