Turkish drone strikes and shellings are a daily occurrence near the northern border, and the Assad regime to the south remains a threat with support from Russian and Iranian forces despite the unpopularity of Bashar al Assad by the general Syrian population. 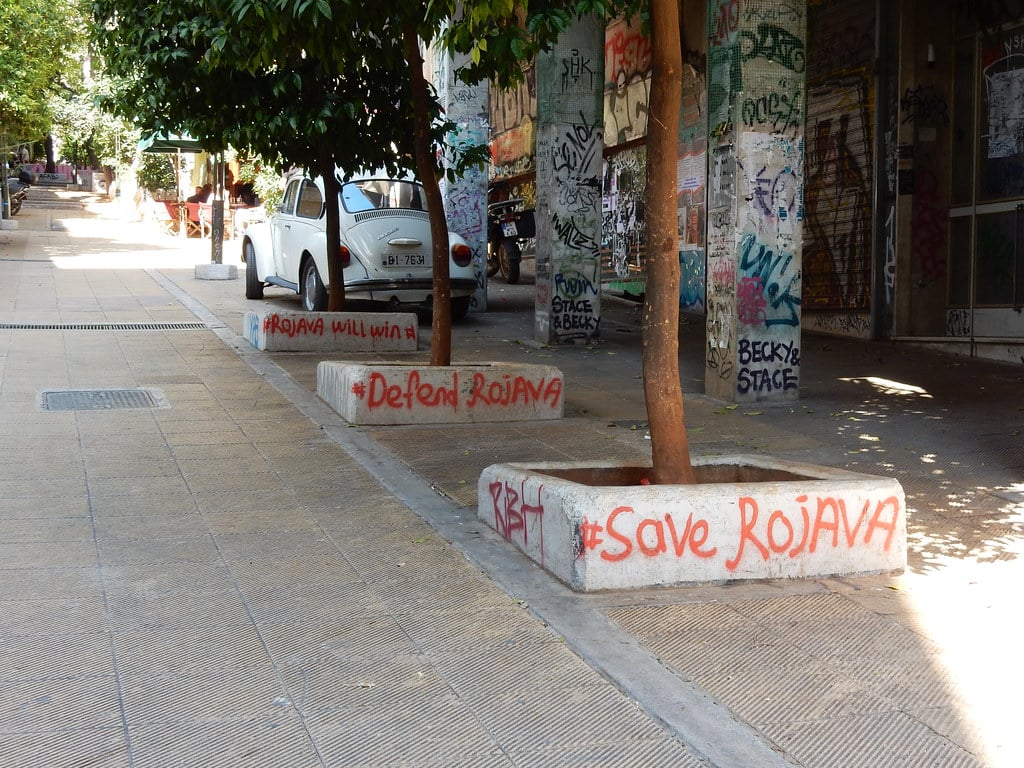 This also has resulted in fear of reprisal against any potential supporters of the democratic government by whichever hostile power could replace the AANES.

If the United States and its Western allies want to prevent further destabilization of the region and a likely resurgence of ISIS in Syria, they need to realign their strategy in North-East Syria to actually meet their policy objectives of a stable and peaceful region.

Before we get into what that strategy and geopolitical effects may be, you need to understand who the AANES is, what its mission is, and the regions that it has governance over.

Rojava is the region of Kurdistan which resides in North and East Syria and has been the scene of the developing democratic system of governance since the Arab Spring of 2011.

It is here that on principles of equality, freedom, and democracy, the first iteration of the AANES was founded in 2016 as the Democratic Federation of Rojava (DFR). 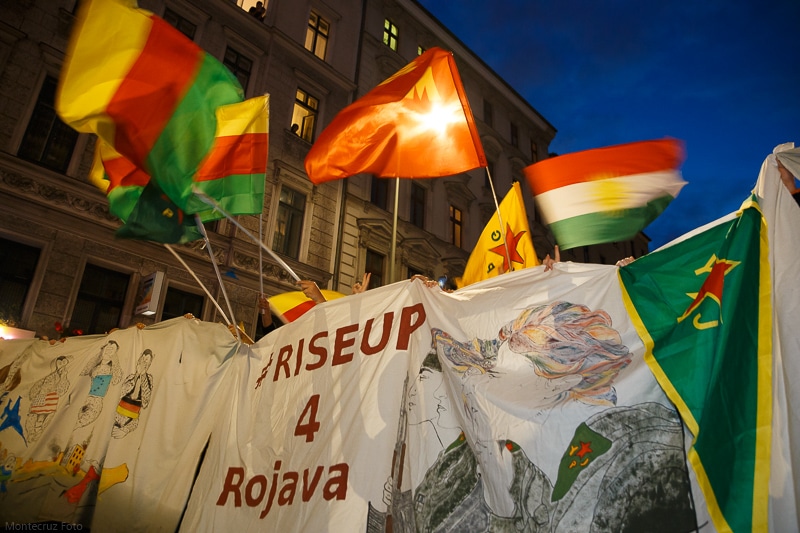 Following the adoption of a formal constitution a few months later, the DFR became the Democratic Federation of North-Eastern Syria to better represent the multi-cultural community of the population they governed.

Over the following twenty-four months the Democratic Federation of North-Eastern Syria and their Syrian Democratic Forces (SDF) would liberate more territory from ISIS control in partnership with U.S. coalition allies.

Following the liberation of these territories from ISIS, the Democratic Federation of North-East Syria was transformed into the Autonomous Administration of North and East Syria (AANES) in 2018. Providing governance for the seven regions of Jazeera, Euphrates, Raqqa, Afrin, Manbij, Tabqa, and Deir Ez-Zor.

The military force of the AANES known as the Syrian Democratic Force (SDF), is a coalition of multi-ethnic, multi-religious forces that believe in the free and democratic values the AANES are working to instill in the region.

The SDF has been working with United States advisors in Syria to address the continued threat of ISIS in the region since their efforts saw the fall of the ISIS capital and liberation of all ISIS-controlled territories in 2018.

However, the SDF and the internal police force of the AANES, the Ashayesh continual battle remnants of the terrorist organization and their ideology in North and East Syria.

Though the political process which led to the establishment of the AANES has its origins in Kurdish regions and Kurdish political ideology, Kurds no longer make up a majority of the population in the regions that are predominantly Arabic but are now governed by the AANES.

North and East Syria is also home to Syriac Christians, Assyrian Christians, Armenian Christians, Yazidis, Turkmen, and Chechens; minorities whose rights are protected by the administration and who are guaranteed equal representation in all political processes.

The groups in these regions have seen immense hardship, suffering from brutal dictatorship by the Assad regime since 1971, followed by occupation by ISIS as well as Turkish-backed Islamist fascist.

Compounding the problems the AANES face attempting to rebuild while enduring this hardship and oppression are the political and economic “Caesar Sanctions” that were intended to specifically target the Assad regime. However, they have also cut off the AANES and the people living in North and East Syria from the global economy.

Despite all this hardship though, the people who live in the AANES governed regions have a much higher quality of living than the rest of Syria. Enjoying basic freedoms, higher wages, and self-determination.

While the AANES still faces many obstacles and shortcomings, they are building the foundations of a multi-ethnic, multi-religious democracy based on gender equality, ecological regeneration, and local political leadership.

The Autonomous Administration of North and East Syria is divided into seven self-governing regions with a population of about 4.5 million people. 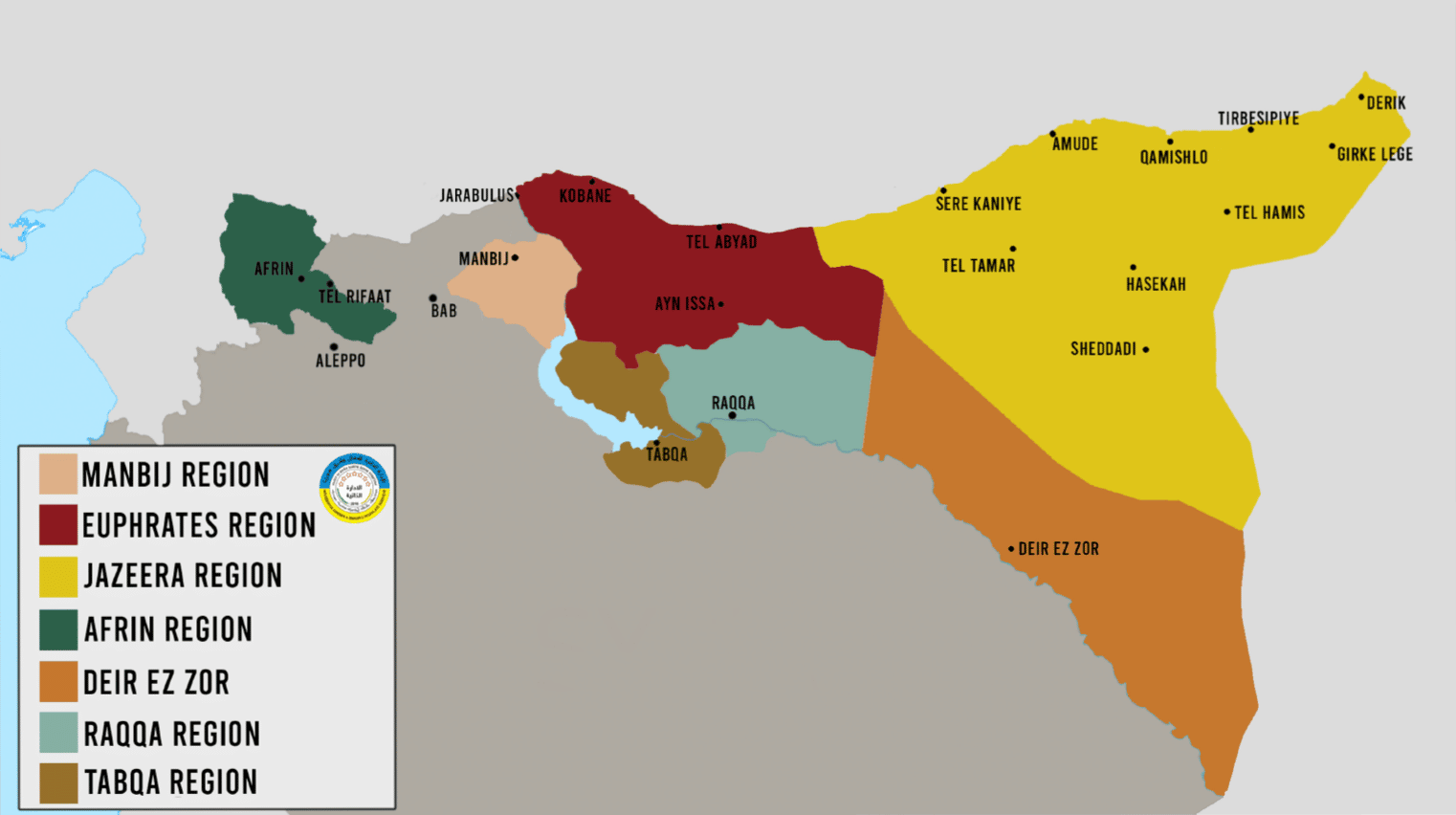 Wheat is the staple crop in North-East Syria, and even though sanctions have significantly impacted commerce, crude oil remains one of the most valuable commodities produced from the region.

The landscape ranges from a green mountainscape in the west, large spans of wheatfields in the north, and a flat desert to the south.

The Mission and Vision of AANES?

The AANES was established on July 16, 2018, at the headquarters of the Syrian Democratic Council in the city of Tabqa.

The representatives of AANES agreed on a Social Contract that would act as the constitution, similar to our Bill of Rights, detailing the system of governance and rights of all ethnicities and religions in the North and East regions.

AANES was created to develop a people-led democracy and prevent further oppression and hostility toward the people. Since the creation of AANES, hundreds of institutions, councils, and communes were established throughout the regions to support religious freedom, women’s rights, political identity, and economic development.

One of the most important outcomes was the establishment of a co-chair system ensuring that men and women had equal contributions and input in every government institution.

“By our free will, we declare this Contract to achieve justice, freedom and democracy in accordance with the principles of ecological balance and equality, without discrimination based on race, religion, belief or gender. The goal of this Contract is to enable the political and moral fabric of the democratic society to achieve its functions, which are mutual understanding, coexistence within pluralism, respect people’s rights for self-determination, the rights of women and children, self-protection and defense, and respect for freedom of religion and belief.”

Stay tuned for more information from the AANES region, such as current threats they are facing from other groups, the capabilities of their military force, and how they plan on building a self-sustaining infrastructure and contributing to global trade.