For anyone who doesn’t anxiously await the release of new Army publications, there is a new Training Circular out – TC 3-22.9 Rifle and Carbine.  I may be a little late to the game, as it was released a week ago, but here are a few of the highlights of this TC, which replaces Field Manual 3-22.9, Rifle Marksmanship, M16-/M4-Series Weapons. 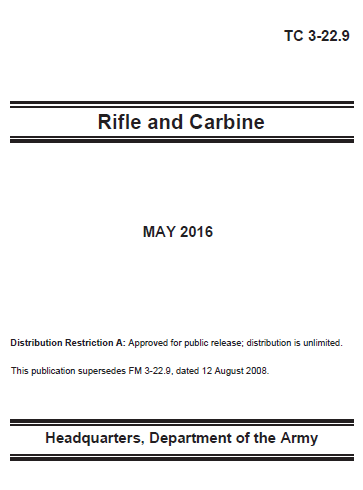 First off, the information has been updated.  A lot.  And it seems to be genuinely aimed at helping soldiers learn to fight with their rifles, not run a flat range qualification.  The illustrations are better (someone finally figured out you can illustrate with a computer, not just hand drawings), and the information is presented in a much more readable format (lots of tables and figures for those of us who can’t just read a bulleted paragraph and learn), especially in the sections on leads, environmental conditions, and range estimation. Second, the Army has finally started to catch up to modern “tactical” shooting.

Ever been told that putting your magazine on the ground will cause your gun to jam?  The Army officially says that’s not true. The workspace is no longer just referring to the place where the lieutenants get stuffed into cubicles. There is actually a ready position that doesn’t require your muzzle be pointed at the ground (although the verbiage still passive-aggressively discourages it, at least they discuss the validity). The malfunction correction flow chart will undoubtedly give members something to laugh about for days, although it’s actually a lot more functional than anything the FM had (but the Army still won’t teach you how to “mortar” because you might hurt yourself and break your gun). 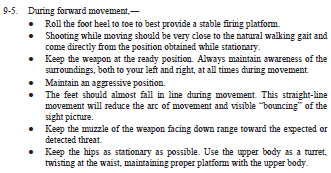 The “duck-walk” is no longer cool.

You might actually have to fire from a prone position other than the one from qualifications.

Oh, and you don’t have to perfectly place your trigger finger anymore.

Now, is this new TC perfect?  Of course not.  I can state from experience that by the time you manage to capture tactics in a document (especially within a bureaucracy), they are no longer the latest and greatest.  There are a few things that they don’t cover that I would have liked to see, like magazine changes.  But, considering that this is the first MAJOR revision to marksmanship since 2008, it represents a lot of hard work from the subject matter experts in the field to catch Big Army up to more relevant marksmanship tactics.  If you haven’t read it, hit it up here.  Take it to the bathroom with you the next time your significant other gripes that you don’t do anything in there and claim professional development.  Don’t really care how you read it, but at least give it a look.  Enjoy!