The Mossberg International 715T is an AR-15 style carbine that shoots the popular .22 Long Rifle (LR) bullet. This super lightweight Rimfire rifle features a 6- position adjustable stock, a quad-rail forend, and a loader cap to assist in rapid reloads. The 715T is the perfect weapon to learn to shoot and develop the fundamentals that are needed to be a great shooter. Since the .22 is such a small round, it produces almost no recoil and best of all, doesn’t scare first-time shooters. This rifle is built in a 10-round magazine or a 25-round magazine, depending on your preference in overall weight and purpose. The barrel is only 16.25″ long and is built with an A2-style muzzle brake for the quick installation of a suppressor. The best feature is the free-floating barrel, which significantly reduces the felt-recoil and increases the overall accuracy of the rifle.

Why Should I Buy The Mossberg International 715T Flat Top?

The Mossberg International 715T is the rifle that I would buy to teach my family how to shoot. If I had teenagers or wanted to teach my wife how to shoot a rifle, I’d choose the 715T due to its low felt-recoil and incredibly low price of $347. The quad-rail built into the receiver is capable of accommodating lights, lasers, optics, scopes, CQB handles, and sling attachments. This rifle is perfect for plinking or hunting small game, such as rabbits, squirrels, snakes, gophers, and other small game or pest species.

Where Can I Buy the Mossberg International 715T Flat Top?

What is a Rimfire Rifle?

Rimfire ammunition is different than centerfire ammunition because the rim or edge of the casing is crushed to ignite the primer. Centerfire ammunition uses the firing pin to strike the primer in the center of the casing. The Rimfire bullet is fired like a percussion cap, instead of using a firing pin to strike the primer. Rimfire cartridges require a softer and thinner metal for the casing than a centerfire cartridge. This prevents Rimfire rifles from chambering higher caliber rifle rounds, such as the .308, 5.56mm, 7.62mm, and 300 Win Mag. The Mossberg International 715T uses a smokeless powder, which expels much higher pressure than centerfire carbines. This feature also ensures there is less fear when shooting this gun because there will not be a lot of smoke after firing. Since .22 LR ammo is so light, it’s often much more affordable than typical rifle calibers as well.

The .22 LR has been around for over a century and used as a varmint hunting and target practice bullet since the early 1880s. The .22 LR has improved since its inception with a longer case length, higher muzzle velocity, and improved versatility. Today, the .22 LR is the most popular cartridge in the world, in regards to the amount sold. Whether you’re shopping for your Boy Scout to get him a rifle shooting merit badge or a cadet at a major university learning how to handle a rifle, the .22 LR is the go-to rifle caliber. It has almost no recoil, it makes very little noise, and is the most affordable bullet you’ll find.

The Remington Thunderbolt is the highest-selling bullet that Remington makes and the most popular .22 caliber bullet in the world. At 25 yards, the round-nosed Thunderbolt travels at a muzzle velocity of 1,167 ft/second. This high velocity gives the bullet better accuracy and more punch than flat-nosed bullets and shoots smoother than any other bullet you can shoot. I recommend this bullet because you can get a bulk package of 500 rounds for $33.00 at Palmetto State (before military or police discount). You can use this to hunt small game, plinking, target practice, and as a learning/teaching rifle. 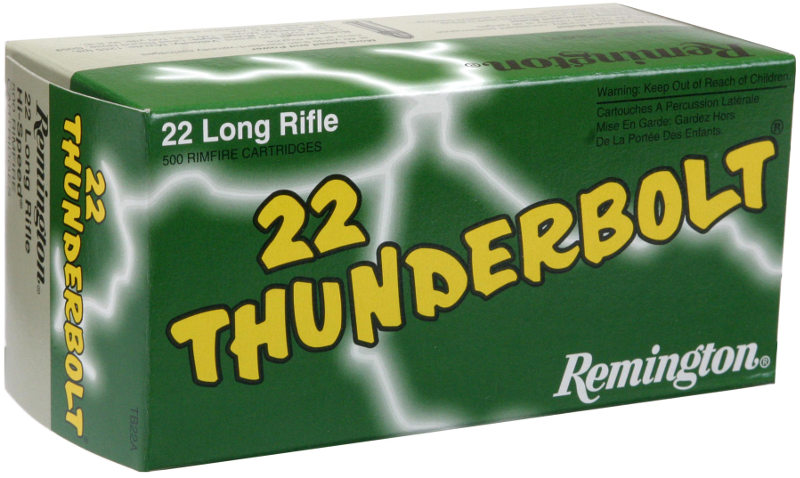 Can I Hunt Deer With my Mossberg International 715T?

The Mossberg International 715T is great for hunting small game, such as squirrels, rabbits, snakes, gophers, moles, voles, and groundhogs. Can the .22 LR kill a deer? Yes, it can easily kill a deer if you hit the deer in a vital organ. However, I will never recommend hunting a deer with a .22 LR because it just doesn’t have the expansion and force that a 5.56, .308, or 7.62mm bullet would have. Deer are incredibly tough and I’ve seen deer hit with my 30-06 broadside run 200 yards before dropping and since it wasn’t hit in a vital organ it was suffering until I quickly put it out of its misery. That same shot with a .22 LR would have caused a very slow and painful death that should be avoided at all times when hunting. Plus, the adrenaline that will be pumping through that deer will allow him/her to run a half mile before succumbing to its injuries. This will most likely taint the meat and give it a “gamey” flavor that you will not like (if you find the deer at all).

I recommend using the Mossberg 715T as a training rifle for your family because of the low-recoil, cheap ammo, low-noise, and the number of ways you can accessorize your rifle. As with any rifle, I always recommend a nice after-market sight, optic, or scope with a tactical light on the side rail.  The Mossberg International 715T gives you the versatility to add up to 4 separate attachments without overcrowding your rifle. I want to give you some options on some of the tactical lights, optics, lasers, and grips you can add to make this rifle personal and accommodating to you.

There are more tactical lights than I can count, but I want to focus on the lights that are versatile, easy to install, and bright enough to see clearly in the dark. The first one is Lasercross CL105 that is both a laser sight and flashlight in one small package. It produces 220 lumens, is wear-resistant, waterproof, shock-proof, and fits on any type of Picatinny Rail system. It’s built with an ambidextrous on/off switch for both left-handed and right-handed shooters. You can run the laser, flashlight, or both at the same time with an estimated laser length of an hour and a half. The Olight Baldr Pro has one of the brightest lights available with 1,350 lumens that shoots out to 853 ft (260 meters) and is equipped with a green laser. The Olight is compatible with any Glock rail and Picatinny Rail so you can use this on your 715T or your Glock handgun. With both the laser and light on, you’ll get about 1 hour and 45 minutes of use before the battery will need to be recharged.

The Bushnell Trophy TRS-25 is a great starter optic that will give you everything you need for increased longevity, such as waterproof, shock-proof, rust-resistant, and fog-proof protection. It’s easily mounted to any Picatinny Rail system and comes with 11 brightness settings with a 3 MOA dot for easy eye-relief. At $62.19, you’ll save almost $100 and get a nice optic that will perform every time you need it to. The Vortex Crossfire II riflescope is a great introduction to scopes and understanding eye relief and holdover while aiming through a lens. I would use this scope as an introduction for my wife or 1st-time shooters in my family because it has the water-proof, shock-proof, fog-proof, and rust-resistant features. It also has elevation adjustments, anti-reflective lens coating, and the ability to adjust your zero after sighting in the rifle. It provides a 2-7×32 magnification, which is perfect for the limited ranges of a .22LR.