The M1911 pistol was designed by John Browning and was the first auto-loading pistol adopted by the United States Army and served as its primary sidearm from 1911 to 1985. It continues, however,  to be used by military units on current deployments.

The Glock was designed by Gaston Glock for the Austrian pistol trials of 1980. It is the current sidearm of numerous military and police forces worldwide. Although Glock has been replacing the 1911 in a lot of military units, the 1911 is still holding its own in a world of polymer striker-fired pistols. 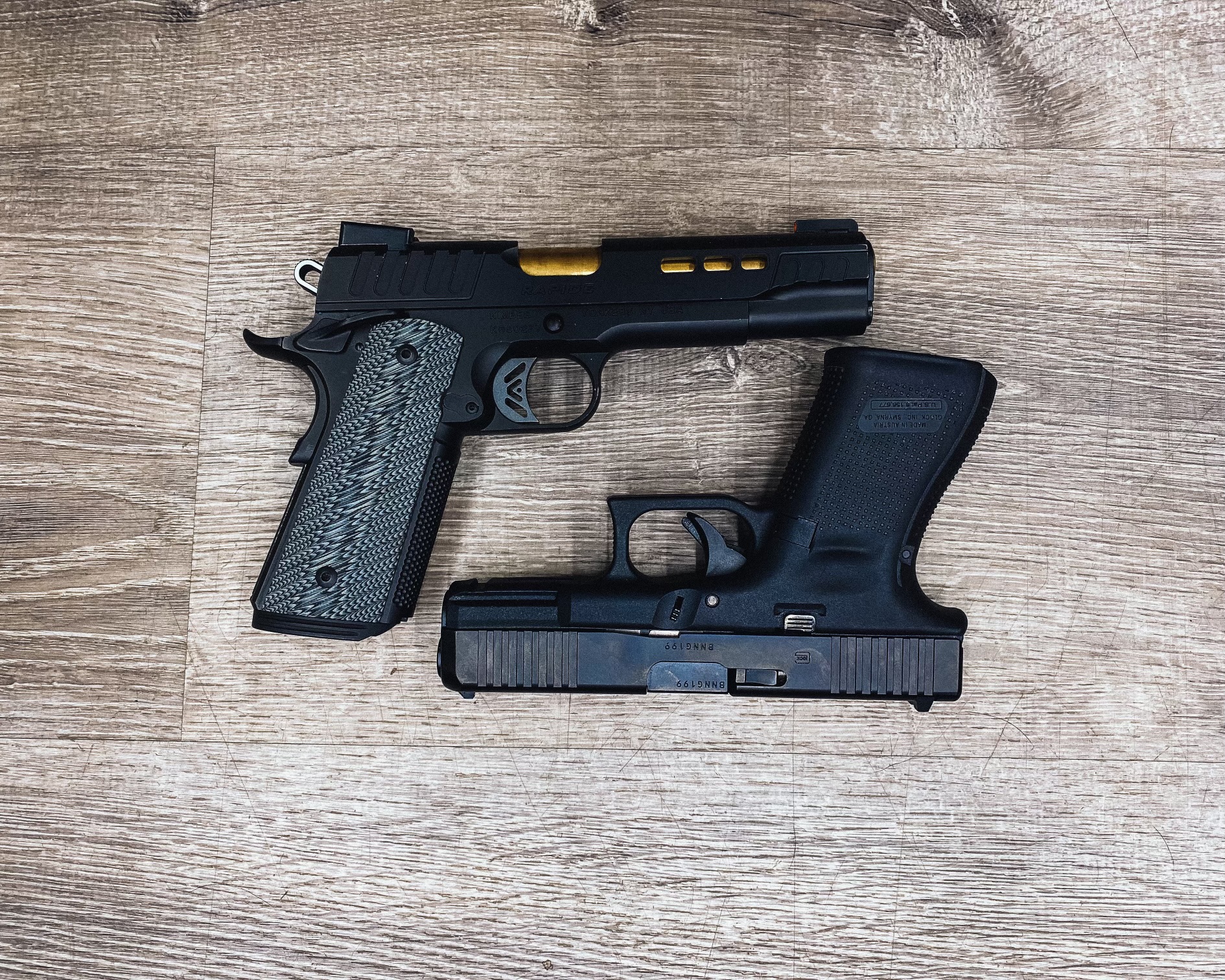 The 1911 is an all-steel single-action pistol. The Glock utilizes a steel slide and barrel, while the frame is a polymer plastic with metal inserts for increased rigidity. it uses the “Safe Action” trigger system and a striker.

Both pistols use the Browning short recoil system. The M1911 uses a removable barrel bushing for forward lockup, a swinging link to control the barrel movement, and lugs machined into the barrel and slide for rear lockup.

The Glock uses the Browning-Pettier system with a cam for barrel movement and a block in the ejection port for rear lockup.

The 1911 has been known for its “crisp, clean” trigger which has very little slack to take up and a very noticeable ‘wall’ before breaking the shot off, its ergonomic grip angle gives your hand a more natural grip angle, and its slim frame due to its single-stack magazine design. The 1911s strengths, however, can also double as its weaknesses. The slim single stack magazine is low capacity of typically 7 or 8 rounds and the single-action trigger necessitates manual safety. Although there is a grip safety AND manual thumb safety, with training and practice, it becomes muscle memory and doesn’t really impede the handling of the firearm.

The Glocks handling has generated more controversy through the different generations. The trigger is sometimes called “spongy” and the heavier “New York” triggers are little liked. The wider double-stack magazine grip may be uncomfortable for shooters with smaller hands, and the grip angle has been known to be a little backward. Although Glock has tried to remedy the grip issues with subtle design differences over time and in some new models they include different backstrap sizes to accommodate different sized hands.

The Glock lacks a manual safety which makes it easier to deploy, and the larger magazine capacity means fewer reloads and allow more ammunition to be carried. The Glocks polymer construction reduces the weight over what a 1911 would be, but with that weight reduction comes more felt recoil.

The Glock and 1911 are both regarded as being very reliable. The 1911s produced for the military are especially well regarded due to stricter interchangeability standards and quality control as well as some of the looser tolerances required by wartime manufacture. The Marine Corps was reusing WWII-era 1911 pistols to produce its MEU(SOC) pistols well into the 1990s; that should tell you something about reliability. Commercially produced 1911s can vary widely in quality and reliability.

The Glock remedies many of the issues with 1911s thanks to it being the ONLY manufacturer of the platform and over 50 years of advancement in design. It is not without its problems, though. The most widely reported issue with the Glock pistols are shooting high-pressure cartridges such as the 40 S&W through its OEM barrels. Case head ruptures causing damage to the gun and injury to the shooter have occurred.  Glock has attributed this to inconsistent reloaded ammunition or modifications to the factory components of the gun.

The whole 1911 versus Glock argument is mostly well-intentioned banter between gun enthusiasts. Kind of like the Ford vs Chevy debate. They are both great trucks and perfectly capable of towing boats and trailers, pulling stuck vehicles out of the mud and snow, or hauling a bed full of firewood. It boils down to user preference.