Do Not Conduct This Shooting Test If You Are A Beginner

The RE Factor Tactical Shooter Standard is tested using the Essentials Target.  This standard was created with the help of different types of shooters to include professional shooters, operators and shooting enthusiasts.  This standard covers a large majority of pistol shooting principles and is designed to test your overall pistol shooting capabilities.   The Shooter Standard covers 10 courses of fire and takes 47 rounds to complete.

***ONLY CLEAN RUNS COUNT***  If you miss, you fail the course of fire.

CoF 1-  We included a bullseye test at the 15-yard line for a number of reasons.  The 15-yard line is hard enough that it can challenge even advanced shooters, yet is close enough that basic shooters can theoretically group on the paper.  This is a test of your basic pistol shooting skills and marksmanship.

CoF 2- This closely represents a quick reaction to a close target.  These times are meant to be fast and are aimed at hitting an object the size of an “A” zone of an IPSC target.  These sizes tend to correlate with the vital internal organs of a human being.

CoF 3- This course of fire tests small target transitions and forces the shooter to obtain a good shooting cadence.  You will find that your best times will most likely be obtained with an equal shot time between the targets.

CoF 4- This course of fire represents a larger target transition and forces you to make a large movement between targets.  This tests your ability to quickly find and engage a new target.

CoF 5- This course of fire tests your ability to quickly run the gun and keep the rounds within a kill zone.  Shooting at the #13 target at the 5-yard line is a distance and size that is close/large enough to let you run the gun quickly but far/small enough to require you to keep positive control of your weapon.

CoF 6- This course of fire tests your trigger manipulation.  The first target is arguably the most difficult shot you will take the entire test.  Even advanced shooters will have trouble hitting the #15 target.  As you progress to the larger targets your trigger speed should speed up.

CoF 7- This course of fire tests your reload speed.  We implement two shots at the end to force you to not attempt to simply throw the shot after the reload into the #7.  The two shots ensure you have good, positive control of your weapon and shot placement after the reload.

CoF 8- This course of fire tests your ability to engage a kill zone sized target at a slightly further distance than CoF #2.

CoF 9- This course of fire represents a more precision shot at a head sized target.  This is a good mix of distance, speed, and accuracy.

CoF 10- This course of fire will throw off a large majority of shooters.  This tests your ability to actively engage and stop a target at a distance that tests the maximum capabilities of most pistols and pistol shooters.

Basic- Basic shooters are not beginner shooters.  We see beginner shooters as shooters that must be monitored and constantly trained by a professional trainer.  BEGINNERS SHOULD NOT TRY THIS DRILL.  For this standard, basic shooters are shooters who are comfortable with draws, reloads and basic pistol manipulation.  They should be able to perform all of the drills to standard but with much slower times than intermediate, advanced or expert shooters.

Use This Drill To Get Better At Shooting

Intermediate- The intermediate shooter will fall in place with a majority of police officers and military personnel trained in basic combat pistol techniques.  If you carry a gun for a living you should be able to pass the intermediate standard.

Expert- This is your sponsored shooter or tier 1 operator that engages in regular competitions, training courses and has an unlimited amount of time and ammunition to train with. 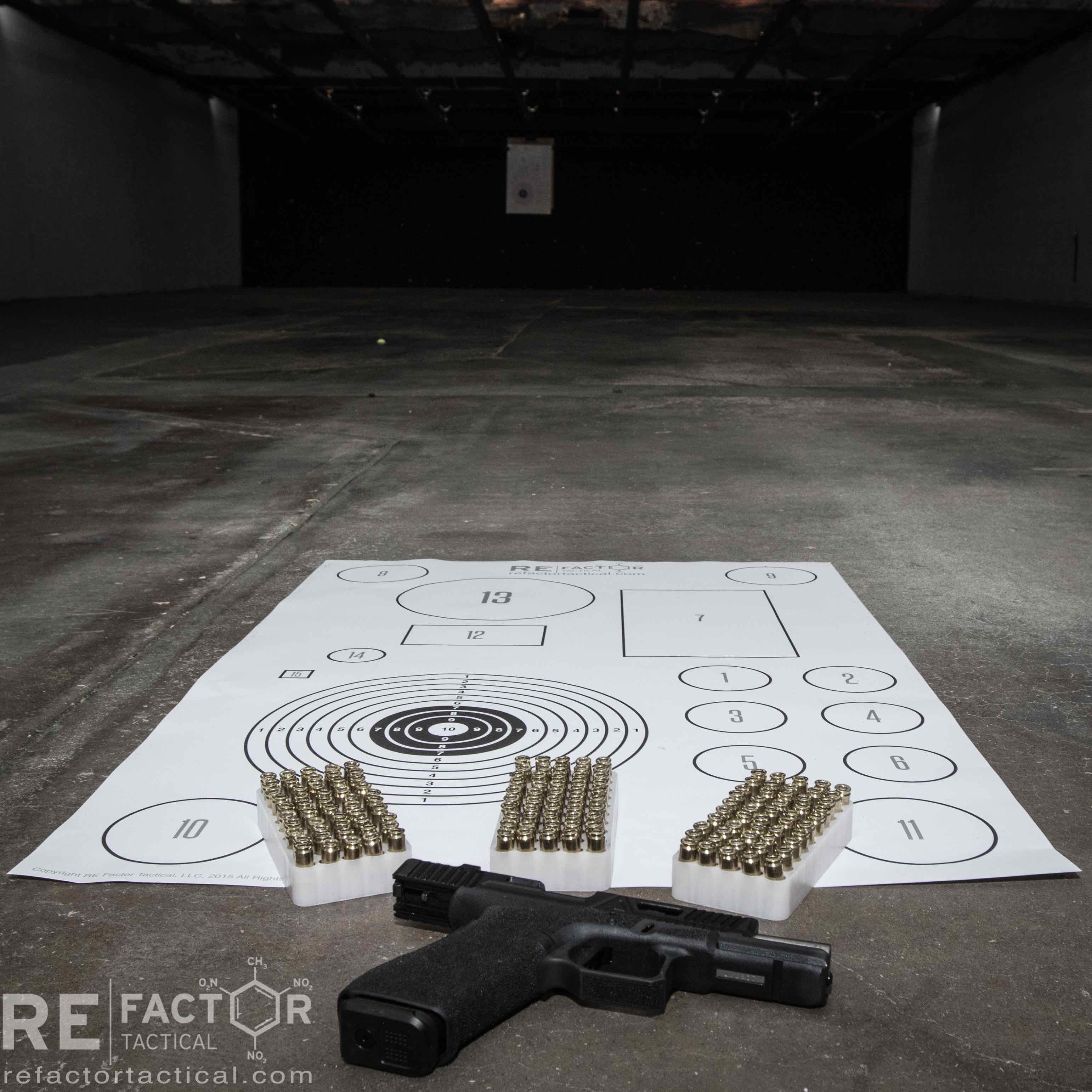 Is the test conducted with or without a cover shirt?

How did you set your scoring times?

We tested a large pool of shooters from basic to sponsored and took the aggregate score of each level.

Why is everything from the draw?

Because most real-life situations start with your pistol in a holster or some other location than just your hand.  If you can draw from your holster you can do all of the other movements within that draw such as a press.

Is this the end all be all of shooting standards?

No, not at all.  This test is not dynamic and does not test any aspects of shooting while moving, turning and shooting, alternate shooting positions, shooting from cover or other advanced shooting skills.  We want this to be something that most people can test themselves on at most ranges.

Where can I purchase the Essentials Target?

It is available at https://www.refactortactical.com/category/shooting/

Get The Best Bang For Your Buck With This Marksmanship Training